Neural tube defects are the most common developmental central nervous system abnormalities. They result from defective closure of the neural tube, and they tend to occur at the 2 extremities of the neuraxis. Folate deficiency is involved in the pathogenesis.

•         Anencephaly is the absence of cranial vault. It is incompatible with life; babies die soon after birth.

•         Neural tube defects of the spinal cord may take a variety of forms. Significant defects lead to paraplegia and urinary incontinence from birth.

•         Spina bifida occulta is a bony defect of the vertebral arch.

•         Meningocele is a bony defect with outpouching of meninges.

•         Meningomyelocele is a defective formation of the bony arch with cystic outpouching of meninges, spinal cord, and spinal roots.

Syringomyelia is an ependymal-lined, CSF-filled channel parallel to and connected with the central canal in the spinal cord. (Hydromyelia means the central canal is dilated with CSF.) About 90% of cases are associated with Arnold-Chiari type 2; the remaining 10% are posttraumatic or associated with intraspinal tumors. Syrinx (the cyst) enlarges progressively and destroys the spinal parenchyma. Symptoms include paralysis and loss of sensory functions.

Perinatal brain injury is injury to the brain during prenatal or immediately post-natal period. This is the most common cause of cerebral palsy, and it occurs most frequently in premature babies.

Dandy-Walker malformation is a non-communicating hydrocephalus with dilation of the fourth ventricle and hypoplasia of the cerebellar vermis.

•   Type 1 (common) is a downward displacement of cerebellar tonsils and the medulla through the foramen magnum. This lesion is mostly asymptomatic.

•   Type 2 is due to a faulty craniospinal junction, resulting in a small pos-terior fossa, with abnormal development of the cerebellar vermis and medulla leading to downward displacement. It is mostly symptomatic because of compression of the fourth ventricle with obstructive hydro-cephalus 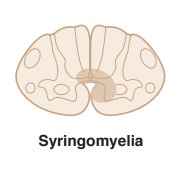 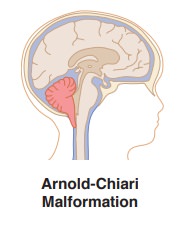