Meningitis is inflammation of the 2 inner meningeal layers, the pia and the arach-noid.

Meningitis is inflammation of the 2 inner meningeal layers, the pia and the arach-noid.

Acute aseptic (viral) meningitis is caused by leptomeningeal inflammation due to viruses (enterovirus most frequent); the inflammation produces a lymphocytic infiltration of leptomeninges and superficial cortex. Patients present with fever, signs of meningeal irritation, and depressed consciousness. Mortality is low. Viral meningitis carries a better prognosis than bacterial meningitis.

Acute viral meningitis is the most common neurologic symptom associated with primary HIV infection; it presents around the time of seroconversion with an acute confusional state. Symptoms resolve after 1 month with supportive care.

•         Streptococcus pneumoniae is the most common cause of meningitis in infants, young children, and adults.

•         Neonates are infected most frequently with group B streptococci but Eschericia coli causes a greater number of fatalities.

•         Neisseria meningitidis is seen in teens and young adults and is often associated with a maculopapular rash.

•         The incidence of Listeria monocytogenes increases after age 50. This pathogen also tends to infect people with poor cell-mediated immunity.

Mycobacterial meningoencephalitis can be caused by Mycobacterium tuberculo-sis or atypical mycobacteria. It occurs in patients who have reactivation of latent infection and immunocompromised patients such as AIDS patients (Mycobacterium avium-intracellulare). Diagnosis requires microscopy/culture of large volumes of CSF. MRI is the imaging test of choice and shows basal meningeal enhancement and hydrocephalus. It usually involves the basal surface of the brain, and may cause characteristic tuberculomas within the brain and dura mater.

The viral encephalitides have common features of perivascular cuffs, microglial nodules, neuron loss, and neuronophagia. Clinical manifestations are variable, and can include mental status change, fever, and headache, often progressing to coma.

•         Arthropod-borne forms can be due to St. Louis, Eastern and Western equine, and Venezuelan encephalitides.

•         Rabies has characteristic Negri bodies in the cytoplasm of hippocampal and Purkinje cells.

•         Progressive multifocal leukoencephalopathy (PML) is caused by JC poly-omavirus. It occurs in immunocompromised patients and patients taking immunomodulatory therapies. Neurologic symptoms are varied and include impairment of cognition and motor function. There is no specific antiviral drug and mortality is high. Tissue sections show areas of demyelination and enlarged oligodendrocytes. 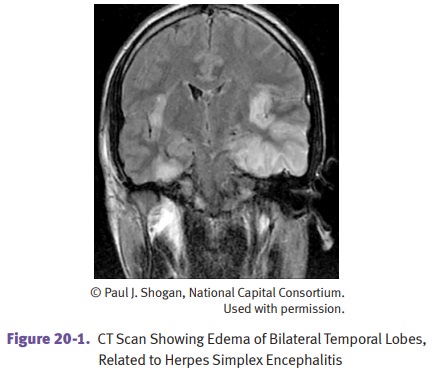 Fungal meningoencephalitides. Candida, Aspergillus, Cryptococcus, and Mucor spe-cies are the most frequent agents. Aspergillus and Mucor have a marked tropism for blood vessels, which leads to vasculitis, rupture of blood vessels, and hemorrhage. Cryptococcus causes diffuse meningoencephalitis, which leads to invasion of the brain through the Virchow-Robin space (a continuation of the subarachnoid space around blood vessels entering the neuropil) and soap bubble lesions.

Toxoplasmosis is caused by the protozoan parasite Toxoplasma gondii. It is common in AIDS patients, and the condition causes cerebral abscess with central necrosis and chronic inflammation. MRI/CT scan shows a characteristic ring-enhancing lesion.

Creutzfeldt-Jakob disease (CJD) is the most common human transmissible spon-giform encephalopathy due to a prion (a protein with the capacity to be an infec-tious agent) that can change the conformation of normal prion protein(s). This can lead to rapidly progressive dementia, memory loss, personality changes, and hallucinations.

•         The prion protein (PrP) is a 30-kD protein normally present in neurons. It is encoded by a single-exon gene on chromosome 20. Its normal conformation is an α-helix: PrPc. In disease states, PrPc changes to a β-pleated sheet con-formation: PrPsc. A low rate of spontaneous change results in sporadic cases of CJD. Mutations of PrP result in hereditary cases of CJD. PrPsc facilitates conformational change of other PrPc molecules into PrPsc.

•         PrPsc is responsible for cerebral pathologic changes, characteristically resulting in spongiform change. This change is a fine vacuolization of the neuropil in the gray matter (especially cortex), which is due to large membrane-bound vacuoles within neuronal processes. There is an associated neuronal loss and astrogliosis. Kuru plaques are deposits of amyloid composed of altered PrP protein.

•         About 85% of Creutzfeld-Jakob cases are sporadic, and 15% are familial. Affected patients are typically middle-aged to elderly patients who develop rapidly progressive dementia and memory loss with startle myoclonus or other involuntary movements. Typical EEG changes may be diagnostic. Death occurs within 6–12 months. 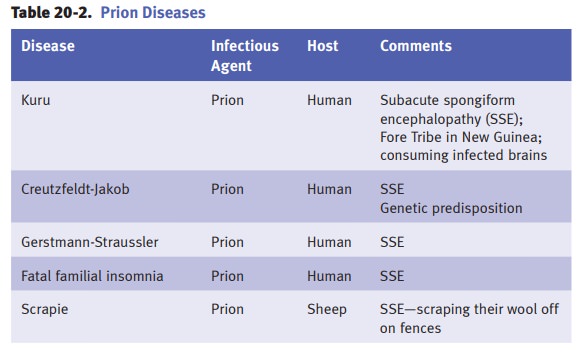 HIV-associated neurocognitive disorder (HAND) presents as cognitive decline with behavioral changes and motor symptoms. Diagnosis is based on clinical features and the exclusion of other etiologies.