Concussion is mild traumatic brain injury with a transient loss of brain function.

Concussion is mild traumatic brain injury with a transient loss of brain function. The trauma is commonly due to a change in the momentum of the head (impact against a rigid surface). Concussion causes loss of consciousness and reflexes, tem-porary respiratory arrest, and amnesia for the event. The pathogenesis is uncertain. Parenchymal injuries may or may not be evident at autopsy

Contusions are bruises of the brain tissue. Common sites of injury include crests of orbital gyri in frontal and temporal poles, in addition to coup (site of injury) and contrecoup (site diametrically opposite) injuries. Coup and contrecoup develop when the head is mobile at the time of impact.

•         Acute contusion is characterized by hemorrhage of brain tissue in a wedge-shaped area. 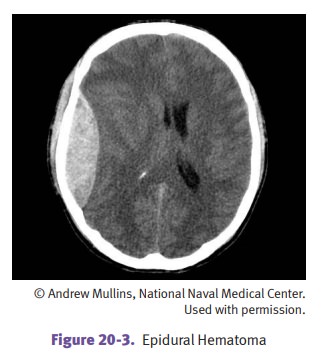 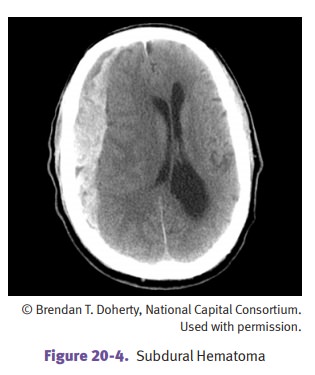 Subdural hematoma is caused by the rupture of bridging veins (from the cerebral convexities to the sagittal sinus); it is usually traumatic in older individuals. Pre-disposing conditions include brain atrophy (due simply to aging) and abnormal hemostatis. Symptoms include headache, drowsiness, focal neurological deficits, and sometimes dementia. It recurs frequently.

Diffuse axonal injury refers to damage to axons at nodes of Ranvier with impairment of axoplasmic flow. It causes coma after trauma without evidence of direct paren-chymal injuries. There is a poor prognosis, related to duration of coma. The injury to the white matter is due to acceleration/deceleration forces with shearing of axons.

The histopathology shows axonal swellings appreciable in the white matter. It is dif-fuse, but with a predilection for the corpus callosum, periventricular white matter, and hippocampus, as well as cerebral and cerebellar peduncles.

Spinal cord injuries are usually traumatic, due to vertebral displacement. Symptom-atology depends on the interruption of ascending and descending tracts.

•         Lesions to thoracic segments or below cause paraplegia.

•         Lesions to cervical segments cause tetraplegia.

•         Lesions above C4 cause respiratory arrest due to paralysis of the diaphragm.

Chronic traumatic encephalopathy is a neurodegenerative disorder that occurs years or decades after a sports career with repetitive brain trauma. Neuropathological changes include neurofibrillary tangles, cerebellar atrophy and gliosis, hypopigmen-tation of the substantia nigra, and cavum septum pellucidum. 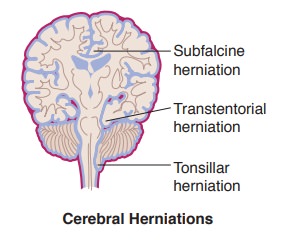 Subfalcine (cingulate gyrus) herniation occurs when the cingulate gyrus is displaced underneath the falx to the opposite side. Compression of the anterior cerebral artery can occur.

Transtentorial (uncal) herniation occurs when the uncus of the temporal lobe is dis-placed over the free edge of the tentorium. Clinical features include compression of the third nerve, ipsilateral pupillary dilatation, and infarction of the tissue supplied by the posterior cerebral artery. Advanced stages of transtentorial herniation can cause Duret hemorrhages within the central pons and midbrain.

Cerebellar tonsillar herniation occurs when there is displacement of cerebellar ton-sils through the foramen magnum. Compression of the medulla may lead to car-diorespiratory arrest.