Parkinson disease (PD) is a progressive neurodegenerative disease that involves genetic and environmental factors. The SNCA gene (alpha-synuclein) has been iden-tified as a risk factor, and gene mutations and multiplications are associated with familial PD, but the majority of cases are sporadic. PD is due to loss of dopaminergic neurons in the substantia nigra, leading to tremor, rigidity, and akinesia.

•         Parkinson disease is the idiopathic form

Parkinson disease is common, affecting 2% of the population. Clinical onset is typi-cally in decades 5–8. Loss of dopaminergic neurons is still unexplained, though theories emphasize oxidative stress. Pesticides and meperidine have been associated with increased risk, while smoking and caffeine are protective.

On gross examination there is pallor of the substantia nigra. Histology shows loss of pigmented (dopaminergic) neurons in the substantia nigra. Residual neurons show Lewy bodies, which are intracytoplasmic round eosinophilic inclusions that contain α-synuclein. Electron microscopy shows filaments most likely of cytoskeletal origin. There is also a secondary degeneration of dopaminergic axons in the striatum.

Loss of the extrapyramidal nigrostriatal pathway leads to inhibition of movement of proximal muscles and disruption of fine regulation of distal muscles. Involvement of the amygdala, cingulate gyrus and higher cortical regions causes dementia and psychosis.

About 60% of patients experience dementia 12 years after diagnosis; 50% also expe-rience depression and psychosis. Those treated with medication (combination car-bidopa and levodopa) and surgery (deep brain stimulation) will become refractory to therapy.

A clinical diagnosis is difficult to make early in disease because symptoms overlap with other conditions. Early symptoms include hyposmia, constipation, and fatigue. Key features are bradykinesia, rigidity, tremor and postural instability. Early in the disease course, a response to levodopa can help confirm the diagnosis. Imaging studies are not useful in most cases.

Huntington disease (HD) is an autosomal dominant disorder. It is characterized pathologically by the degeneration of GABAergic neurons of the caudate nucleus, and clinically by involuntary movements, cognitive decline, and behavioral changes.

•         Affects those of northwestern European descent

•   Mutations due to expansion of unstable cytosine-adenine-guanine (CAG) repeats

The pathophysiology is that loss of caudate nucleus GABAergic neurons removes inhibitory influences on extrapyramidal circuits, thus leading to chorea.

Clinical onset is typically in decades 3–5. The chorea is characterized by sudden, unexpected, and purposeless contractions of proximal muscles while awake. Psychi-atric symptoms may predate motor symptoms. Disease progression leads to depen-dency and death.

A definitive diagnosis can be based on clinical symptoms with an affected parent. Otherwise, DNA determination is the gold standard. Prenatal diagnosis and pre-implantation diagnostics are available. Treatment is medical therapeutics for chorea (dopamine receptor blocking or depleting agents).

Alzheimer disease (AD) causes 60% of all cases of dementia. It is the most common cause of dementia in people age >65.

Aluminum is an epiphenomenon, not a risk factor

•         Protective factors include high level of education and smoking

About 5–10% of AD cases are hereditary, early onset, and transmitted as an autoso-mal dominant trait. There are 3 genes that cause autosomal dominant AD:

Carriers of APP and PSEN1 mutations develop early- onset AD. Other AD suscepti-bility genes have been identified. APOE is the largest effect locus for late-onset AD. 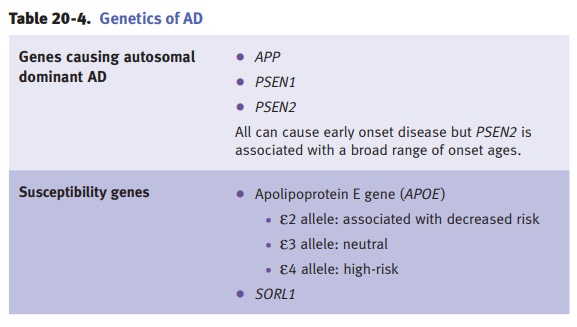 •         Abnormal proteins. Aβ amyloid is a 42-residue peptide derived from a normal transmembrane protein, the amyloid precursor protein (APP). There is also an abnormal tau (a microtubule-associated protein).

•         Neuritic plaques have a core of Aβ amyloid and are surrounded by abnormal neurites.

•         Cerebral amyloid angiopathy is accumulation of Aβ amyloid within the media of small and medium-size intracortical and leptomeningeal arteries; it may occur by itself and cause intracerebral hemorrhage.

•         Additional changes include granulovacuolar degeneration and Hirano bod-ies, which develop in the hippocampus and are less significant diagnostically.

Affected areas are involved in learning and memory. Lesions involve the neocortex, hippocampus, and several subcortical nuclei including forebrain cholinergic nuclei (i.e., basal nucleus of Meynert). The earliest and most severely affected are the hip-pocampus and temporal lobe. Small numbers of neuritic plaques and neurofibrillary tangles also form in intellectually normal aging persons.

Macroscopic changes include atrophy of affected regions, producing brains that are smaller (atrophic), with thinner gyri and wider sulci. Hippocampi and temporal lobes are markedly atrophic.

No effective treatment is available for AD but there is mild improvement with inhibi-tors of acetylcholinesterase (e.g., tacrine).

Lewy body dementia is a progressive brain disease associated with the formation of Lewy bodies in neurons involving neocortex and subcortical nuclei. The etio-pathogenesis is obscure, with no known risk factors; it is the second leading cause of degenerative dementia in the elderly.

The involvement of the neocortex and substantia nigra is responsible for cogni-tive deterioration and parkinsonism. Clinical manifestations include memory loss, parkinsonism, and visual hallucinations. There is a possible treatment benefit from cholinesterase inhibitors.

The clinical diagnosis is supported by a biopsy of muscles. The etiopathogenesis is obscure; 5–10% of cases are hereditary, and a small number are caused by mutation of the gene encoding zinc-copper superoxide dismutase on chromosome 21.

There is no cure for ALS. Ultimately, involvement of respiratory muscles will lead to death.

Friedreich ataxia is an autosomal recessive disorder which leads to degeneration of nerve tissue in the spinal cord, especially those sensory neurons connected to the cerebellum affecting muscle movement of the arms and legs. Onset is early child-hood.

Clinical manifestations include gait ataxia, dysarthria, hand clumsiness, loss of sense of position, impaired vibratory sensation, and loss of tendon reflexes. There is an increased incidence of heart disorders and diabetes. Patients become wheelchair-bound by age 5.

Alcohol abuse causes generalized cortical and cerebellar atrophy, as well as Wer-nicke-Korsakoff syndrome. The neurologic disease is usually related to thiamine deficiency. There can be hemorrhages in the mamillary bodies and the walls of the third and fourth ventricles. Neuronal loss and gliosis may be prominent.

•         Korsakoff psychosis is more severe and has irreversible anterograde and ret-rograde amnesia.

•         Central pontine myelinolysis may cause death.