Cerebrovascular disease is the third most frequent cause of death in industrialized countries, and it is the leading cause of serious disability in the United States.

Cerebrovascular disease is the third most frequent cause of death in industrialized countries, and it is the leading cause of serious disability in the United States. Risk factors are similar to coronary artery disease.

•         Global cerebral ischemia (diffuse ischemic encephalopathy) is caused by a fall in blood flow to the brain, due to processes such as shock, cardiac arrest, and hypotensive episodes. While the entire brain can be damaged, some regions have selective vulnerability, including Purkinje neurons, hippocampus, CA1 (Sommer sector), and pyramidal neurons of cortex. The pathology often includes infarcts in watershed areas, cortical laminar necrosis, and diffuse ischemic necrosis of neocortex. Global cerebral ischemia may lead to brain death.

•         Transient ischemic attack (TIA) is due to small platelet thrombi or athero-emboli and is characteristically reversible, with symptoms lasting less than 24 hours.

Can be due to thrombotic occlusion in the setting of atherosclerosis of the cerebral arteries; the thrombotic infarction is characteristically an anemic (white) infarct.

Can be due to embolic occlusion, most often due to thromboemboli from cardiac chambers and less frequently due to atheroemboli. Embolic infarction produces a hemorrhagic infarct. Small-vessel disease is a cause of small, lacunar infarcts or lacunae, and it is related to hypertension, resulting in hyaline arteriolosclerosis.

Atherosclerotic aneuryms are fusiform, involve the basilar arterty, and present with infarction.

The pathology (i.e., morphological features of brain infarcts) of infarc-tion is illustrated in Table 20-3. Clinical manifestations depend on the affected arterial distribution. 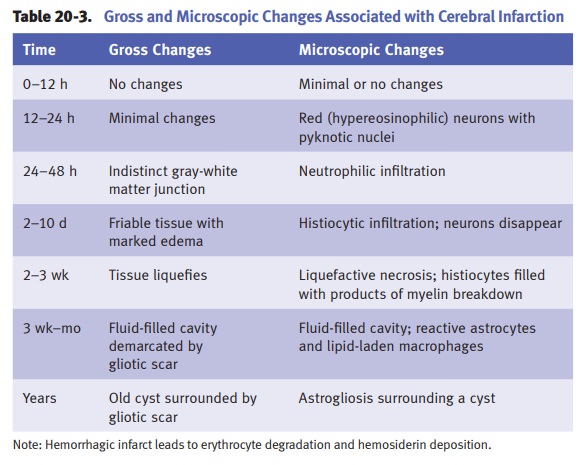 Intracerebral (intraparenchymal) hemorrhage causes severe headache, fre-quent nausea/vomiting, steady progression of symptoms over 15–20 minutes, and coma. It is most frequently due to hypertension, and in those instances, it most commonly involves the basal ganglia, cerebellum, pons, and centrum semiovale.

Berry aneurysms are thin-walled saccular outpouchings, consisting of intima and adventitia only. They are the most frequent cause of subarachnoid hemorrhage. The most frequent sites are the anterior circle of Willis at branching points. Rupture is precipitated by a sudden increase in blood pressure; the prognosis after rupture is that one-third die, one third recover, and one-third rebleed. The pathogenesis involves a congenital focal weakness of vessel media that is not identifiable at birth.Associated disorders include Marfan syndrome, Ehlers-Danlos type 4,and adult polycystic kidney disease. Hypertension and cigarette smoking predispose to formation. 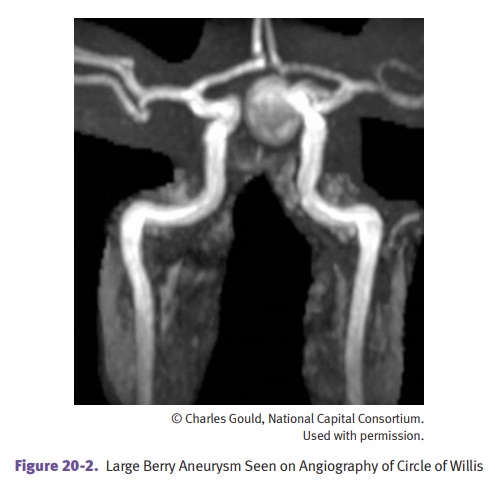