Leukocytosis is characterized by an elevated white blood cell count.

Leukocytosis is characterized by an elevated white blood cell count. It has the fol-lowing features:

Increased release from bone marrow storage pool may be caused by corti­ costeroids, stress, or endotoxin

Infectious mononucleosis, an acute, self-limited disease, which usually resolves in 4–6 weeks, is an example of a viral disease that causes lymphocytosis. The most common cause is Epstein-Barr virus (a herpesvirus) though other viruses can cause it as well (heterophile-negative infectious mononucleosis is most likely due to cytomegalovirus).

The “classic triad” includes fever, sore throat with gray-white membrane on tonsils, and lymphadenitis involving the posterior auricular nodes. Another sign is hepatosplenomegaly.

Complications include hepatic dysfunction, splenic rupture, and rash if treated with ampicillin.

Diagnosis is often made based on symptoms. Lymphocytosis and a rising titer of EBV antibodies are suggestive of the infection. Atypical lymphocytes may be present in peripheral blood. Mono-spot test is often negative early in infection.

•         Increased basophils are seen with chronic myeloproliferative disorders such as polycythemia vera.

Leukopenia is characterized by a decreased white blood cell count. It has the fol-lowing features:

•         Decreased neutrophils can be due to decreased production (aplastic anemia, chemotherapy), increased destruction (infections, autoimmune disease such as systemic lupus erythematosus), and activation of neutrophil adhesion mol-ecules on endothelium (as by endotoxins in septic shock).

•         Decreased eosinophils are seen with increased cortisol, which causes seques-tering of eosinophils in lymph nodes; examples include Cushing syndrome and exogenous corticosteroids. 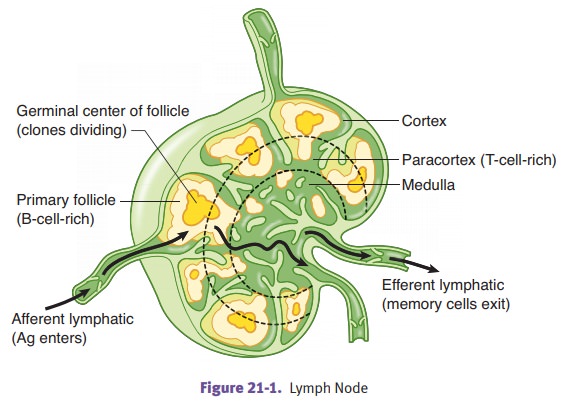 Lymphadenopathy is lymph node enlargement due to reactive conditions or neo-plasia.

Neoplasia usually causes nontender enlargement of lymph nodes. The most common tumor to involve lymph nodes is metastatic cancer (e.g., breast, lung, malignant melanoma, stomach and colon carcinoma), which is initially seen under the lymph node capsule. Other important causes of lymphadenopathy are malignant lymphoma and infiltration by leukemias.