Equivalence class partitioning gives the tester a useful tool with which to develop black box based-test cases for the software-under-test. The method requires that a tester has access to a specification of input/output behavior for the target software. 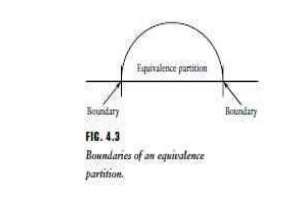 2. If an input condition for the software-under-test is specified as a number of values, develop valid test cases for the minimum and maximum numbers as well as invalid test cases that include one lesser and one greater than the maximum and minimum. For example, for the real-estate module mentioned previously that specified a house can have one to four owners, tests that include 0,1 owners and 4,5 owners would be developed. The following is an example of applying boundary value analysis to output equivalence classes. Suppose a table of 1 to 100 values is to be produced by a module. The tester should select input data to generate an output table of size 0,1, and 100 values, and if possible 101 values.

3. If the input or output of the software-under-test is an ordered set, such as a table or a linear list, develop tests that focus on the first and last elements of the set. It is important for the tester to keep in mind that equivalence class partitioning and boundary value analysis apply to testing both inputs and outputs of the software-under-test, and, most importantly, conditions are not combined for equivalence class partitioning or boundary value analysis. Each condition is considered separately, and test cases are developed to insure coverage of all the individual conditions. An example follows.

Suppose we are testing a module that allows a user to enter new widget identifiers into a widget data base. We will focus only on selecting equivalence classes and boundary values for the inputs. The input specification for the module states that a widget identifier should consist of 3-15 alphanumeric characters of which the first two must be letters. We have three separate conditions that apply to the input: (i) it must consist of alphanumeric characters, (ii) the range for the total number of characters is between 3 and 15, and, (iii) the first two characters must be letters. Our approach to designing the test cases is as follows. First we will identify input equivalence classes and give them each an identifier. Then we will augment these with the results from boundary value analysis. Tables will be used to organize and record our findings. We will label the equivalence classes with an identifier ECxxx, where xxx is an integer whose value is one or greater. Each class will also be categorized as valid or invalid for the input domain.

First we consider condition 1, the requirement for alphanumeric characters. This is a ―must be‖ condition. We derive two equivalence classes.

Then we treat condition 2, the range of allowed characters 3-15.

Finally we treat the ―must be‖ case for the first two characters.

EC7. The first 2 characters are not letters, invalid. 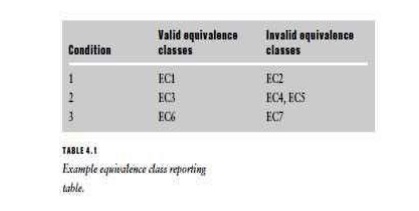 Note that each condition was considered separately. Conditions are not combined to select equivalence classes. The tester may find later on that a specific test case covers more than one equivalence class. The equivalence classes selected may be recorded in the form of a table as shown in Table 4.1. By inspecting such a table the tester can confirm that all the conditions and associated valid and invalid equivalence classes have been considered. Boundary value analysis is now used to refine the results of equivalence class partitioning. The boundaries to focus on are those in the allowed length for the widget identifier. An experienced tester knows that the module could have defects related to handling widget identifiers that are of length equal to, and directly adjacent to, the lower boundary of 3 and the upper boundary of 15. A simple set of abbreviations can be used to represent the bounds groups. For example:

LB—the value on the lower boundary

UB—the value on the upper bound

For our example module the values for the bounds groups are:

Note that in this discussion of boundary value analysis, values just above the lower bound (ALB) and just below the upper bound (BUB) were selected. These are both valid cases and may be omitted if the tester does not believe they are necessary. The next step in the test case design process is to select a set of actual input values that covers all the equivalence classes and the boundaries. Once again a table can be used to organize the results. Table 4.2 shows the inputs for the sample module. Note that the table has the module name, identifier, a date of creation for the test input data, and the author of the test cases.

Table 4.2 only describes the tests for the module in terms of inputs derived from equivalence classes and boundaries. Chapter 7 will describe the components required for a complete test case. These include test inputs as shown in Table 4.2, along with test conditions and expected outputs.

Test logs are used to record the actual outputs and conditions when execution is complete. Actual outputs are compared to expected outputs to determine whether the module has passed or failed the test. Note that by inspecting the completed table the tester can determine whether all the equivalence classes and boundaries have been covered by actual input test cases. For this example the tester has selected a total of nine test cases. The reader should also note then when selecting inputs based on equivalence classes, a representative value at the midpoint of the bounds of each relevant class should be included as a typical case. In this example, a test case was selected with 9 characters, the average of the range values of 3 and 15 (test case identifier 9). The set of test cases presented here is not unique: other sets are possible that will also cover all the equivalence classes and bounds. Based on equivalence class partitioning and boundary value analysis these test cases should have a high possibility of revealing defects in the module as opposed to selecting test inputs at random from the input domain. In the latter case there is no way of estimating how productive the input choices would be. This approach is also a better alternative to exhaustive testing where many combinations of characters, both valid and invalid cases, would have to be used. Even for this simple module exhaustive testing would not be feasible.