Boolean algebra is an algebraic structure defined by a set of elements B, together with two binary operators. ‘+’ and-‘, provided‘ that the following (Huntington) postulates are satisfied;

Boolean algebra is an algebraic structure defined by a set of elements B, together with two binary operators. ‘+’ and-‘, provided‘ that the following (Huntington) postulates are satisfied;

1.    Interchanging the OR and AND operations of the expression.

2.    Interchanging the 0 and 1 elements of the expression.

3.    Not changing the form of the variables.

The theorems of Boolean algebra can be used to simplify many a complex Boolean expression and also to transform the given expression into a more useful and meaningful equivalent expression. The theorems are presented as pairs, with the two theorems in a given pair being the dual of each other. These theorems can be very easily verified by the method of ‗perfect induction‘. According to this method, the validity expression is tested for all possible combinations of values of the variables involved. Also, since the validity of the theorem is based on its being true for all possible combinations of values of variables, there is no reason why a variable cannot be replaced with its complement, or vice versa, without disturbing the validity. Another important point is that, if a given expression is valid, its dual will also be valid. 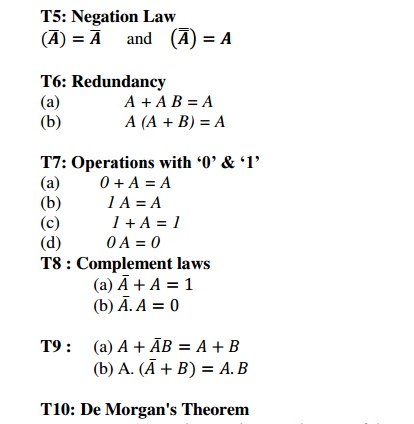 Truth tables are a means of representing the results of a logic function using a table. They are constructed by defining all possible combinations of the inputs to a function, and then calculating the output for each combination in turn. 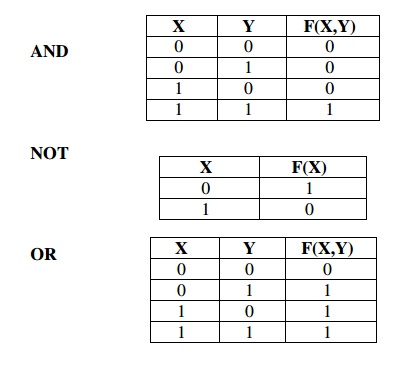 A binary variable may appear either in its normal form (x) or in its complement form (x' ). Now consider two binary variables x and y combined with an AND operation. Since each variable may appear in either form, there are four possible combinations: x' y', x'y. xy ' , and xy. Each of these four AND term s is called a minterm, or a standard product.

In a similar fashion, n variables forming g an OR terrn with each variable being primed or Unprimed provide 2" possible combinations called maxterm. or standard sums.

For a two-variable expression, the minterms and maxterms are as follows

For a three-variable expression, the minterms and maxterms are as follows 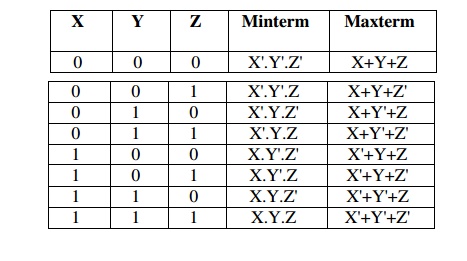 To derive the Sum of Products form from a truth table, OR together all of the minterms which give a value of 1.Consider the truth table as example,