The process of industrialisation started in India from the mid-19th century. The beginning of modern industry is associated with the development in mainly plantations like jute, cotton and also steel.

The process of industrialisation started in India from the mid-19th century. The beginning of modern industry is associated with the development in mainly plantations like jute, cotton and also steel. There was a limited development of mining, especially coal. The accelerated industrialisation began with the development of railways and roadways. This growth greatly influenced the economic and social life of people in the country. The two World Wars gave an impetus to the development of number of industries such as chemical, iron and steel, sugar, cement, glass and other consumer goods. Most mills were setup by wealthy Indian businessmen. Initially this development was confined to the setting up of cotton and jute textile mills. 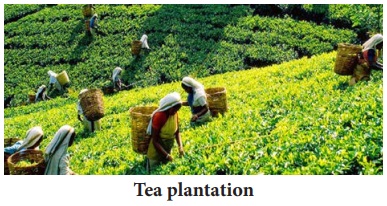 In India, modern industrial sector in an organized form started with the establishment of cotton textile industry in Bombay in 1854. In 1855, jute industry was started in the Hooghly valley at Rishra near Calcutta. The first paper mill was started in Ballygunj near Calcutta in 1870. The cotton mills were dominated by Indian enterprises and the jute mills were owned by the British capitalists. Cotton mills were opened in Bombay and Ahmedabad, and jute mills proliferated on the Hooghly river banks. The woollen and leather factories became prominent in Kanpur.

The heavy industries included the iron and steel industry, Steel was first manufactured by modern methods at Kulti in 1874.Iron and steel industries began rooted in the Indian soil in the beginning of 20th century. However, the credit for the development of large-scale manufacture of steel in India goes to Jamshedji Tata. The Tata Iron and Steel Company (TISCO) was setup in 1907 at Jamshedpur. It started producing pig iron in 1911 and steel ingots in 1912. 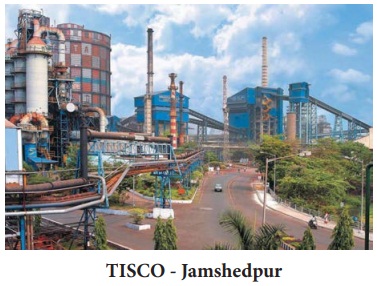