An effective sedative (anxiolytic) agent should reduce anxiety and exert a calming effect.

An effective sedative (anxiolytic) agent should reduce anxiety and exert a calming effect. The degree of central nervous system depression caused by a sedative should be the minimum consistent with therapeutic efficacy. A hypnotic drug should produce drows-iness and encourage the onset and maintenance of a state of sleep. Hypnotic effects involve more pronounced depression of the cen-tral nervous system than sedation, and this can be achieved with many drugs in this class simply by increasing the dose. Graded dose-dependent depression of central nervous system function is a characteristic of most sedative-hypnotics. However, individual drugs differ in the relationship between the dose and the degree of central nervous system depression. Two examples of such dose-response relationships are shown in Figure 22–1. The linear slope for drug A is typical of many of the older sedative-hypnotics, including the barbiturates and alcohols. With such drugs, an increase in dose higher than that needed for hypnosis may lead to a state of general anesthesia. At still higher doses, these sedative-hypnotics may depress respiratory and vasomotor centers in the medulla, leading to coma and death. Deviations from a linear dose-response relationship, as shown for drug B, require propor-tionately greater dosage increments to achieve central nervous system depression more profound than hypnosis. This appears to be the case for benzodiazepines and for certain newer hypnotics that have a similar mechanism of action. 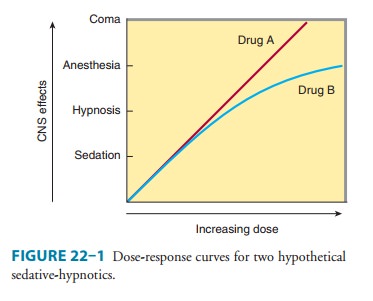