The benzodiazepines are widely used sedative-hypnotics. All of the structures shown in Figure 22–2 are 1,4-benzodiazepines, and most contain a carboxamide group in the 7-membered heterocy-clic ring structure.

The benzodiazepines are widely used sedative-hypnotics. All of the structures shown in Figure 22–2 are 1,4-benzodiazepines, and most contain a carboxamide group in the 7-membered heterocy-clic ring structure. An electronegative substituent in the 7 posi-tion, such as a halogen or a nitro group, is required for sedative-hypnotic activity. The structures of triazolam and alprazo-lam include the addition of a triazole ring at the 1,2-position. 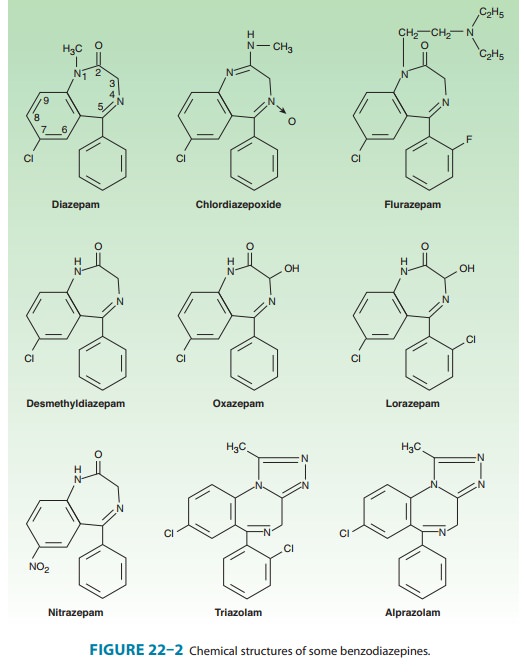 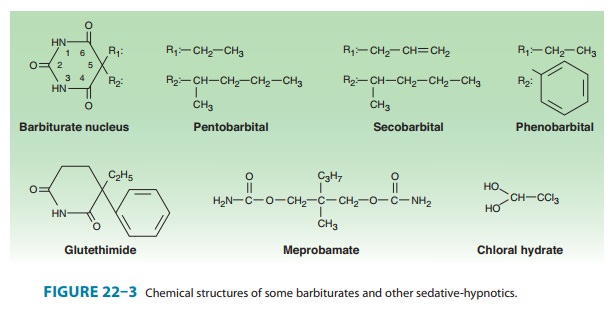 The sedative hypnotic class also includes compounds of simpler chemical struc-ture, including ethanol  and chloral hydrate.Several drugs with novel chemical structures have been intro-duced more recently for use in sleep disorders. Zolpidem, an imidazopyridine, zaleplon, a pyrazolopyrimidine, and eszo-piclone, a cyclopyrrolone (Figure 22–4), although structurallyunrelated to benzodiazepines, share a similar mechanism of action, as described below. Eszopiclone is the (S)-enantiomer of zopiclone, a hypnotic drug that has been available outside the United States since 1989. Ramelteon, a melatonin receptor ago-nist, is a more recently introduced hypnotic drug (see Box: Ramelteon). Buspirone is a slow-onset anxiolytic agent whose actions are quite different from those of conventional sedative-hypnotics. 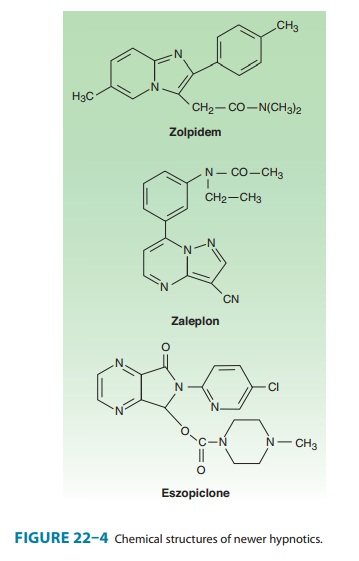 Other classes of drugs that exert sedative effects include anti-psychotics  and many antidepressant drugs . The latter are currently used widely in the manage-ment of chronic anxiety disorders. Certain antihistaminic agents including diphenhydramine, hydroxyzine, and promethazine  cause sedation but commonly also exert marked effects on the peripheral autonomic nervous system. Antihistaminic drugs with sedative effects are available as over-the-counter sleep aids.