We are now ready to start talking about code-scheduling algorithms. We start with the easiest problem: scheduling operations in a basic block consisting of machine instructions. Solving this problem optimally is NP-complete. But in practice, a typical basic block has only a small number of highly constrained operations, so simple scheduling techniques suffice. We shall introduce a simple but highly effective algorithm, called list scheduling, for this problem.

2. Each edge e in E is labeled with delay de indicating that the destination node must be issued no earlier than de clocks after the source node is issued. Suppose operation n± is followed by operation n2, and the same location is accessed by both, with latencies l1 and l2 respectively. That is, the location's value is produced l1 clocks after the first instruction begins, and the value is needed by the second instruction l2 clocks after that instruction begins (note — 1 and l2 = 0 is typical). Then, there is an edge n1 -» n2 in E labeled with delay l1 — l2.

Example 1 0 . 6 : Consider a simple machine that can execute two operations every clock. The first must be either a branch operation or an ALU operation of the form:

The load operation (LD) is fully pipelined and takes two clocks. However, a load can be followed immediately by a store ST that writes to the memory location read. All other operations complete in one clock.

Shown in Fig. 10.7 is the dependence graph of an example of a basic block and its resources requirement. We might imagine that Rl is a stack pointer, used to access data on the stack with offsets such as 0 or 12. The first instruction loads register R2, and the value loaded is not available until two clocks later. This observation explains the label 2 on the edges from the first instruction to the second and fifth instructions, each of which needs the value of R2. Similarly, there is a delay of 2 on the edge from the third instruction to the fourth; the value loaded into R3 is needed by the fourth instruction, and not available until two clocks after the third begins.

Since we do not know how the values of Rl and R7 relate, we have to consider the possibility that an address like 8 (Rl) is the same as the address 0 (R7). That 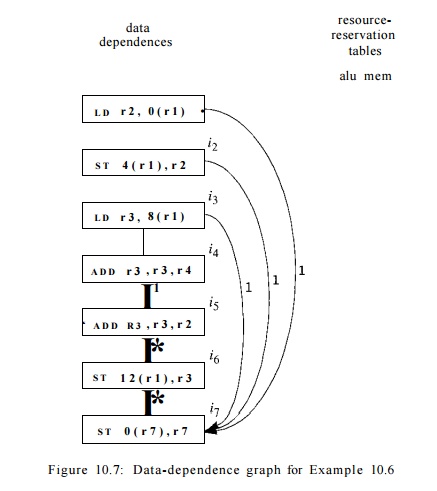 is, the last instruction may be storing into the same address that the third instruction loads from. The machine model we are using allows us to store into a location one clock after we load from that location, even though the value to be loaded will not appear in a register until one clock later. This observation explains the label 1 on the edge from the third instruction to the last. The same reasoning explains the edges and labels from the first instruction to the last. The other edges with label 1 are explained by a dependence or possible dependence conditioned on the value of R7. •

It is frequently useful to visualize a resource-reservation table for an oper-ation by a grid of solid and open squares. Each column corresponds to one of the resources of the machine, and each row corresponds to one of the clocks during which the operation executes. Assuming that the operation never needs more than one unit of any one resource, we may represent l's by solid squares, and O's by open squares. In addition, if the operation is fully pipelined, then we only need to indicate the resources used at the first row, and the resource-reservation table becomes a single row.

This representation is used, for instance, in Example 10.6. In Fig. 10.7 we see resource-reservation tables as rows. The two addition operations require the "alu" resource, while the loads and stores require the "mem" resource.

The list-scheduling algorithm we shall describe next visits the nodes in the chosen prioritized topological order. The nodes may or may not wind up being scheduled in the same order as they are visited. But the instructions are placed in the schedule as early as possible, so there is a tendency for instructions to be scheduled in approximately the order visited.

INPUT : A machine-resource vector R — [ r i , r 2 , . . . ] , where r« is the number of units available of the ith kind of resource, and a data-dependence graph G — (N, E). Each operation n in N is labeled with its resource-reservation table RTn; each edge e = ni —> n2 in E is labeled with de indicating that n2 must execute no earlier than de clocks after m.

OUTPUT : A schedule S that maps the operations in N into time slots in which the operations can be initiated satisfying all the data and resources constraints.

METHOD : Execute the program in Fig. 10.8. A discussion of what the "prior-itized topological order" might be follows in Section 10.3.3. 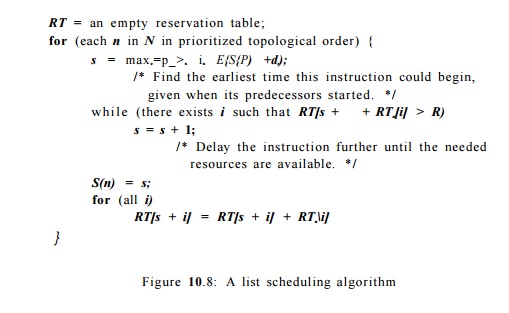 List scheduling does not backtrack; it schedules each node once and only once. It uses a heuristic priority function to choose among the nodes that are ready to be scheduled next. Here are some observations about possible prioritized orderings of the nodes:

• Without resource constraints, the shortest schedule is given by the critical path, the longest path through the data-dependence graph. A metric  useful as a priority function is the height of the node, which is the length of a longest path in the graph originating from the node.

• Finally, we can use the source ordering to break ties between operations; the operation that shows up earlier in the source program should be sched-uled first.

Using the height as the priority function, Algorithm 10.7 finds an optimal schedule as shown in Fig. 10.9. Notice that we schedule the load of R3 first, since it has the greatest height. The add of R3 and R4 has the resources to be 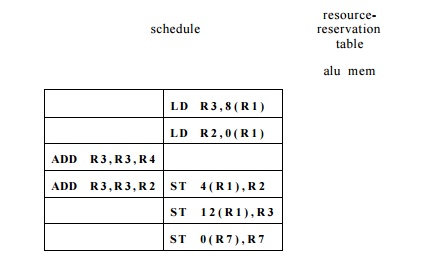 Figure 10.9:  Result of applying list scheduling to the example in Fig. 10.7 scheduled at the second clock, but the delay of 2 for a load forces us to wait until the third clock to schedule this add. That is, we cannot be sure that R3 will have its needed value until the beginning of clock 3.

Exercise 10.3.2 : Assume a machine with one ALU resource (for the ADD and SUB operations) and one MEM resource (for the LD and ST operations). Assume that all operations require one clock, except for the LD, which requires two. However, as in Example 10.6, a ST on the same memory location can commence one clock after a LD on that location commences. Find a shortest schedule for each of the fragments in Fig. 10.10.

i. The machine has one ALU resource and two MEM resources.

ii. The machine has two ALU resources and one MEM resource.

b)  What are all the critical paths in your graph from part (a)?

c) Assuming unlimited MEM resources, what are all the possible schedules for the seven instructions?