Thus food security for people in a country is not only dependent on the quantum of food available but also on the ability of people to purchase/access food and to stay in appropriate healthy environment. 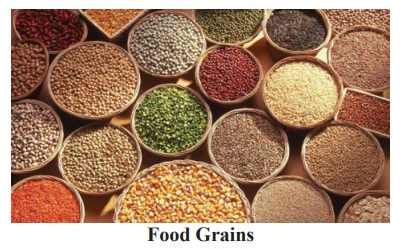 After an initial focus on agriculture, industrialisation was given priority. The recurrent droughts experienced by India pushed her to be dependent on imports of food grains. However, the available foreign exchange reserve could not permit open market purchases and import of grains. India had to plead for food grains from richer countries at concessional rates. United States of America extended assistance through its Public Law 480 (PL 480) scheme to India during early 1960s.

A growing country with a massive population was perceived to be a potential candidate for revolution. The American administration and philanthropic organisations like Ford Foundation formulated a plan to increase food production in the country by introducing High Yielding Varieties (HYV) of wheat and rice. This programme was implemented in select districts where irrigation was assured. The results were promising and the programme was extended to cover a larger number of districts.

This growth in food grain production was made possible by the HYV programme, which was implemented as a package. Apart from introducing fertiliser-responsive high-yielding varieties of rice and wheat, it ensured the availability of subsidised chemical fertilisers for the farmers. Cheaper farm cre di t w as disbursed to farmers through co- operative banks and societies. Minimum support price (MSP) for the crops were announced at the beginning of the season and the state procured the harvested grains through the Food Corporation of India (FCI). The FCI had built huge storage godowns and built buffer stocks of food grain during the harvest season to be distributed all through the year.

Minimum Support Price is a price fixed by an expert group for a particular crop by considering various costs involved in the cultivation of that crop. After announcing the MSP, the State will open procurement centres in places where these crops are widely grown. However, the farmers are free to sell in the open market if they get a better price for their crop produce. On the other hand, if the open market price is lower than the MSP, the farmers would get an assured price (the MSP) by selling their produce to the FCI.

The rapid increase in food grain production was accompanied by appropriate tec hnological interventions in the dairy, poultry and fisheries sectors. As a result, the milk production in the country witnessed an eight-fold increase, egg production grew 40-fold and fish production by 13-fold between the time of Independence and mid-2000s. However, India could not succeed in attaining self-sufficiency in the production of pulses and oil seeds. Therefore, India depends on imports to meet the requirements of people.

Tamil Nadu has adopted an ‘Universal’ PDS, the rest of the states in India had a ‘Targeted’ PDS. Under universal PDS all the family ration card holders are entitled to the supplies from PDS. In the targeted PDS, the beneficiaries are identified based on certain criteria and given their entitlements, leaving out the rest. Both the Union and the State governments subsidised the supplies distributed through PDS. The level and quantum of subsidy also varied across states. 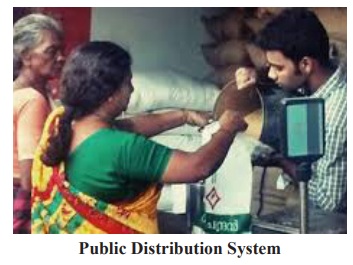 On 1 November 2016, National Food Security Act was implemented in Tamil Nadu after holding out for three years.

Buffer stock is the stock of food grains, namely wheat and rice, procured by the government through the Food Corporation of India (FCI). The FCI purchases wheat and rice from the farmers in states where there is surplus production. The farmers are paid a pre-announced price for their crops. This price is called Minimum Support Price (MSP). The MSP is declared by the government every year before the sowing season to provide incentives to farmers for raising the production of these crops. The purchased food grains are stored in granaries.

Buffer stock is done to distribute food grains in the deficit areas and among the poorer strata of the society at a price lower than the market price also known as the Issue Price. This also helps resolve the problem of shortage of food during adverse weather conditions or during the periods of calamity.