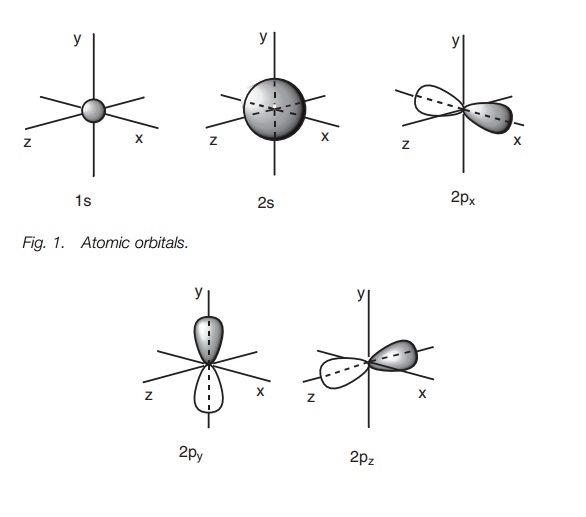 Carbon is in the second row of the periodic table and has six electrons which will fill up lower energy atomic orbitals before entering higher energy orbitals (aufbau principle). Each orbital is allowed a maximum of two elec-trons of opposite spin (Pauli exclusion principle). When orbitals of equal energy are available, electrons will occupy separate orbitals before pairing up (Hund’s rule). Thus, the electronic configuration of a carbon atom is 1s2 2s2 2px1 2py1.

Carbon has six electrons and is in row 2 of the periodic table. This means that there are two shells of atomic orbitals available for these electrons. The first shell closest to the nucleus has a single s orbital – the 1s orbital. The second shell has a single s orbital (the 2s orbital) and three p orbitals (3x2p). Therefore, there are a total of five atomic orbitals into which these six electrons can fit. The s orbitals are spherical in shape with the 2s orbital being much larger then the 1s orbital. The p orbitals are dumbbell-shaped and are aligned along the x, y and z axes. Therefore, they are assigned the 2px, 2py and 2pz atomic orbitals (Fig. 1).

Carbon is in the second row of the periodic table and has six electrons which will fill up the lower energy atomic orbitals first. This is known as the aufbau princi-ple. The 1sorbital is filled up before the 2sorbital, which is filled up before the 2p orbitals. The Pauli exclusion principle states that each orbital is allowed a maxi- mum of two electrons and that these electrons must have opposite spins. There- fore, the first four electrons fill up the 1s and 2s orbitals.  The electrons in each orbital have opposite spins and this is represented in Fig. 3 by drawing the arrows pointing up or down. There are two electrons left to fit into the remaining 2p orbitals. These go into separate orbitals such that there are two half-filled orbitals and one empty orbital. Whenever there are orbitals of equal energy, electrons will only start to pair up once all the degenerate orbitals are half filled. This is known as Hund’s rule.