Definition In sp3 hybridization, the s and the p orbitals of the second shell are ‘mixed’ to form four hybridized sp3 orbitals of equal energy.

In sp3 hybridization, the s and the p orbitals of the second shell are ‘mixed’ to form four hybridized sp3 orbitals of equal energy.

Each hybridized orbital contains a single unpaired electron and so four bonds are possible.

Each sp3 orbital is shaped like a deformed dumbbell with one lobe much larger than the other. The hybridized orbitals arrange themselves as far apart from each other as possible such that the major lobes point to the cor-ners of a tetrahedron. sp3 Hybridization explains the tetrahedral carbon in saturated hydrocarbon structures.

The valence electrons for carbon can now be fitted into the sp3 hybridized orbitals (Fig. 1). There was a total of four electrons in the original 2s and 2p orbitals. The s orbital was filled and two of the p orbitals were half filled. After hybridization,there is a total of four hybridized sp3  orbitals all of equal energy. By Hund’s rule, they are all half filled with electrons which means that there are four unpaired electrons. Four bonds are now possible.

Each of the sp3 hybridized orbitals has the same shape – a rather deformed looking dumbbell (Fig. 2).  This deformed dumbbell looks more like a p orbital than an s orbital since more p orbitals were involved in the mixing process.

Each sp3 orbital will occupy a space as far apart from each other as possible by pointing to the corners of a tetrahedron (Fig. 3). Here, only the major lobe of each hybridized orbital has been shown and the angle between each of these lobes is 109.5 . This is what is meant by the expression tetrahedral carbon. The three-dimensional shape of the tetrahedral carbon can be represented by drawing a nor-mal line for bonds in the plane of the page. Bonds going behind the page are represented by a hatched wedge, and bonds coming out the page are represented by a solid wedge.

The four sp3 orbitals for these three atoms form a tetrahedral arrangement with one or more of the orbitals occupied by a lone pair of electrons. Considering the atoms alone, nitrogen forms a pyramidal shape where the bond angles are slightly less than 109.5° (c. 107°) (Fig. 5a). This compression of the bond angles is due to the orbital containing the lone pair of electrons, which demands a slightly greater amount of space than a bond. Oxygen forms an angled or bent shape where two lone pairs of electrons compress the bond angle from 109.5° to c. 104 (Fig. 5b). 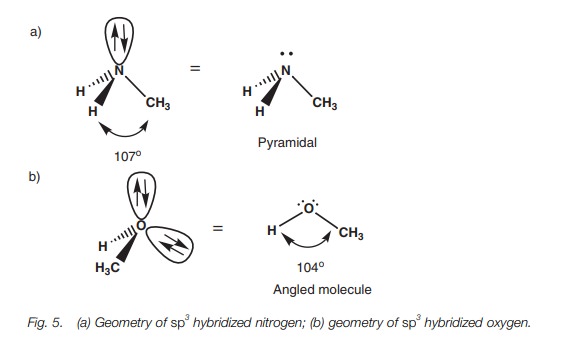