Assembly modeling is a technique applied by CAD and product visualization software systems to utilize multiple files that shows components within a product.

The designer usually has approach to models that others are functioning on concurrently. For example, different people may be creating one machine that has different components. New parts are extra to an assembly model as they are generated. Every designer has approach to the assembly model, during a work in progress, and while working in their own components. The design development is noticeable to everyone participated. Based on the system, it might be essential for the users to obtain the most recent versions saved of every individual component to update the assembly.

The personal data files defining the 3D geometry of personal components are assembled together via a number of sub assembly levels to generate an assembly explaining the complete product. Every CAD methods support the bottom-up construction. A few systems, through associative copying of geometry between components allow top-down construction. Components can be situated within the assembly applying absolute coordinate position methods.

Mating conditions are defines of the relative location of mechanism between each other; for example axis position of two holes or distance between two faces. The final place of all objects based on these relationships is computing using a geometry constraint engine built into the CAD package.

The significance of assembly modeling in obtaining the full advantages of Product Life-cycle Management has directed to ongoing benefits in this technology. These contain the benefit of lightweight data structures that accept visualization of and interaction with huge amounts of data related to product, interface between PDM systems and active digital mock up method that combine the skill to visualize the assembly mock up with the skill to design and redesign with measure, analyze and simulate.

When components are additional to an assembly, parent and child relationships are created. These relationships are displayed by graphically as an assembly tree. Parts are parametrically connected by position constraints. These constraints have data about how a part should be placed within the assembly hierarchy and how it should respond if other components are edited.

Functioning within the framework of an assembly is prepared easier by accepting to apply more commands to other parts and sub-assemblies. These contain the Annotation Text, Inquire, Point, Datum Plane and Pattern Component commands. Bigger assembly performance is improved by removing unwanted redraws and improved display management while zooming.

Assembly models have additional data than simply the sum of their components. With assembly modeling interference verifies between parts and assembly specific data such as mass properties. 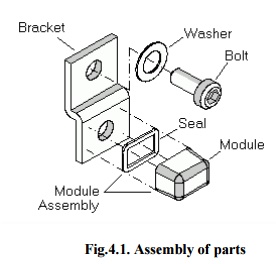 In a ‘bottom up’assembly design, complex assemblies are divided into minor subassemblies and parts. Every part is considered as individual part by one or more designers. The parts can be archived in a library in one or more 3D Files. This is the high effective way to generate and manage

of the actual part is applied; it revises automatically if the archived part is edited by activating.

The ‘bottom up’assembly design hierarchy of the basic assembly is shown in figure 4.2. All the parts exist prior to Part1. When Part1 is generated, it becomes the active. It would utilize the menu

sequence to add Bracket and it becomes the active part. 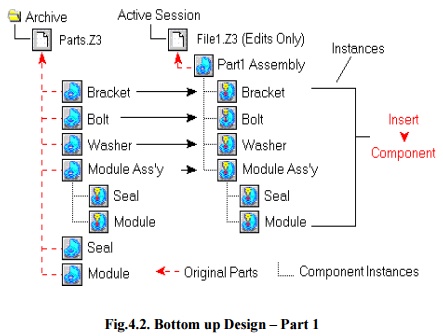 Module of subassembly is added similar as ‘Bracket’,‘Bolt’,and ‘Washer’again becoming a

child of Part-1. But, because Module Subassembly already has the two items Seal and Module, they are added and continue as its children.

§    All of the items are illustrations of the original parts that reside in the ZW3D file Parts Z3.

§    If File-1 is eliminated from the active assembly before it is saved and Part1 are removed. The original parts placed in the file Parts Z3 are not changed.

In a ‘topdown’assembly design all parts are classically designed by the similar person within a single part. 3D assembly handles ‘top down’method by allowing to design and creation of a component while work in the active part. Hence, the active part will be an assembly part.

The part becomes a child of the active part and then it will be the active part. The part, when generated, is an instance of a base part which will be a root object located in the active file. Every part is activated and modified as needed. The ‘top down’assembly design has its benefits. If the project is terminated or to go in a different new direction, removing the file will remove the part and all of its components.

The ‘top down’assembly method is shown in a figure 4.3 and one of the components exist prior to Part-1. When Part-1 is generated, it will be the active part. The following command sequence to generate Bracket and create it the active part. 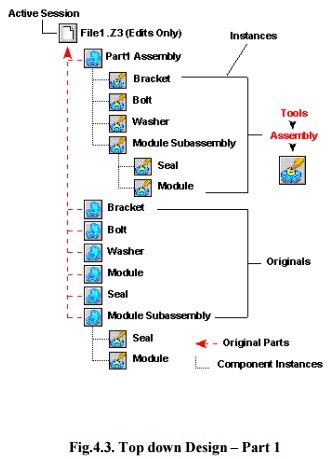 ·       Part-1 contains 4 components, which are illustrations of the basic parts located in File-1.

·        Subassembly Module contains 2 components which are also illustrations of the basic parts located in File-1.