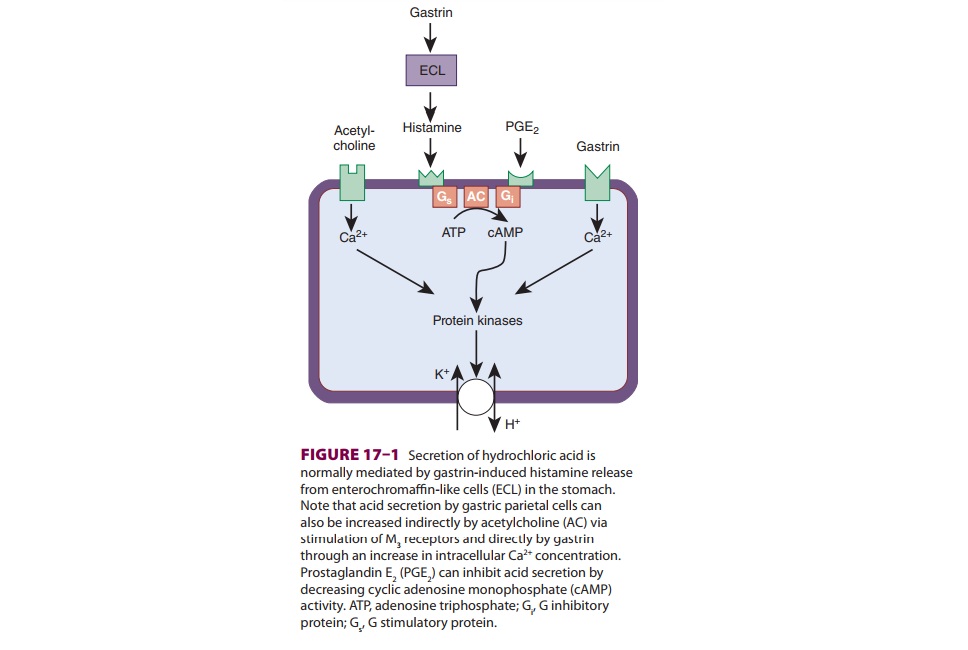 Histamine is found in the central nervous system, in the gastric mucosa, and in other peripheral tissues.

Histamine is found in the central nervous system, in the gastric mucosa, and in other peripheral tissues. It is synthesized by decarboxylation of the amino acid histidine. Histaminergic neurons are primarily located in the posterior hypothalamus but have wide projections in the brain. Histamine also normally plays a major role in the secretion of hydrochloric acid by parietal cells in the stomach ( Figure 17–1). The highest concentrations of histamine are found in the storage granules of circulating basophils and mast cells throughout the body. Mast cells tend to be concentrated in connective tissue just beneath epithelial (mucosal) surfaces. Histamine release (degranulation) from these cells can be triggered by chemical, mechanical, or immunological stimulation 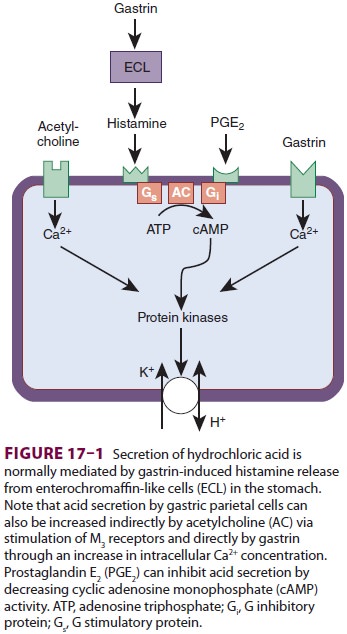 Multiple receptors mediate the effects of hista-mine. The H1 receptor activates phospholipase C, whereas the H2 receptor increases intracellular cyclic adenosine monophosphate (cAMP). An H 3 receptor is primarily located on histamine-secreting cells and mediates negative feedback, inhibiting the synthesis and release of additional histamine. Histamine-N-methyltransferase metabolizes histamine to inactive metabolites that are excreted in the urine.

Histamine constricts bronchiolar smooth muscle via the H1 receptor. H 2-Receptor stimulation may pro-duce mild bronchodilation. Histamine has variable effects on the pulmonary vasculature; the H1 recep-tor appears to mediate some pulmonary vasodila-tion, whereas the H 2 receptor may be responsible for histamine-mediated pulmonary vasoconstriction.

The classic wheal-and-flare response of the skin to histamine results from increased capillary perme-ability and vasodilation, primarily via H 1-receptor activation.