Serotonin, 5-hydroxytryptamine (5-HT), is present in large quantities in platelets and the GI tract (enterochromaffin cells and the myenteric plexus).

Serotonin, 5-hydroxytryptamine (5-HT), is present in large quantities in platelets and the GI tract (entero-chromaffin cells and the myenteric plexus). It is also an important neurotransmitter in multiple areas of the central nervous system. Serotonin is formed by hydroxylation and decarboxylation of tryptophan. Monoamine oxidase inactivates serotonin into 5-hydroxyindoleacetic acid (5-HIAA). The physiol-ogy of serotonin is very complex because there are at least seven receptor types, most with multiple sub-types. The 5-HT3 receptor mediates vomiting and is found in the GI tract and the brain (area postrema). The 5-HT2A receptors are responsible for smooth muscle contraction and platelet aggregation, the 5-HT4 receptors in the GI tract mediate secretion and peristalsis, and the 5-HT6 and 5-HT7 receptors are located primarily in the limbic system where they appear to play a role in depression. All except the 5-HT3 receptor are coupled to G proteins and affect either adenylyl cyclase or phospholipase C; effects of the 5-HT3 receptor are mediated via an ion channel.

Except in the heart and skeletal muscle, serotonin is a powerful vasoconstrictor of arterioles and veins. Its vasodilator effect in the heart is endotheliumdependent. When the myocardial endothelium is damaged following injury, serotonin produces vaso-constriction. The pulmonary and renal vasculatures are very sensitive to the arterial vasoconstrictive effects of serotonin. Modest and transient increases in cardiac contractility and heart rate may occur immediately following serotonin release; reflex bra-dycardia often follows. Vasodilation in skeletal mus-cle can subsequently cause hypotension. 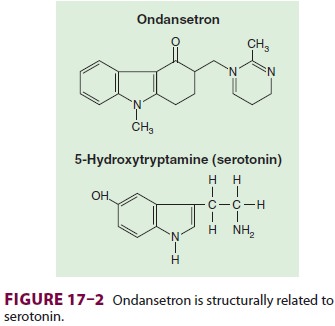 receptors, which are located peripherally (abdomi-nal vagal afferents) and centrally (chemoreceptor trigger zone of the area postrema and the nucleus tractus solitarius), appear to play an important role in the initiation of the vomiting reflex. The 5-HT3 receptors of the chemoreceptor trigger zone in the area postrema reside outside the blood–brain bar-rier. The trigger zone is activated by substances such as anesthetics and opioids and signals the nucleus tractus solitarius, resulting in PONV. Emetogenic stimuli from the GI tract similarly stimulate the development of PONV.

5-HT3-receptor antagonists are generally admin-istered at the end of surgery. All these agents are effective antiemetics in the postoperative period. In comparison with other antiemetic agents such as droperidol (1.25 mg) and dexamethasone (4 mg), ondansetron appears equally effective. A new agent, palonosetron (Aloxi), has an extended duration of action and may reduce the incidence of postdis-charge nausea and vomiting (PDNV).

5-HT3 receptor antagonists are essentially devoid of serious side effects, even in amounts several times the recommended dose. They do not appear to cause sedation, extrapyramidal signs, or respi-ratory depression. The most commonly reported side effect is headache. All three drugs can slightly prolong the QT interval on the electrocardiogram. This effect may be more frequent with dolasetron, although it has not been associated with any adverse arrhythmias. Nonetheless, these drugs, particularly dolasetron, should be used cautiously in patients who are taking antiarrhythmic drugs or who have a prolonged QT interval.

Ondansetron undergoes extensive metabo-lism in the liver via hydroxylation and conjuga-tion by cytochrome P-450 enzymes. Liver failure impairs clearance several-fold, and the dose should be reduced accordingly. The recommended intrave-nous dose is 12.5 mg for dolasetron and 1 mg for granisetron. All three drugs are available in oral for-mulations for PONV prophylaxis.