Diphenhydramine (an ethanolamine) is one of a diverse group of drugs that competitivelyblocks H1 receptors.

Diphenhydramine (an ethanolamine) is one of a diverse group of drugs that competitivelyblocks H1 receptors (Table 17–1). Many drugs with 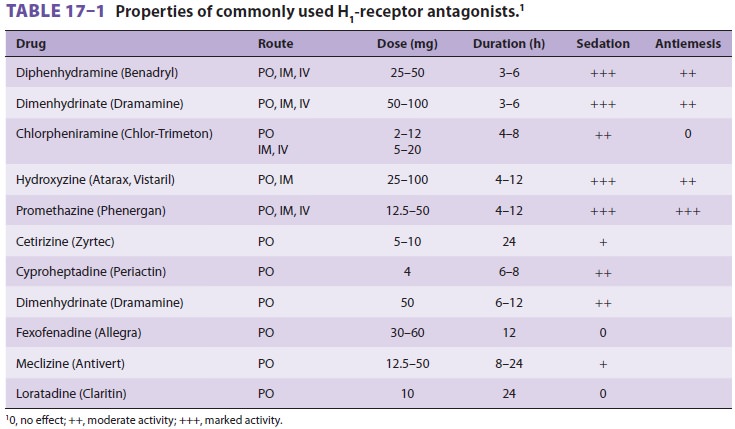 Like other H1-receptor antagonists, diphenhydr-amine has a multitude of therapeutic uses: suppres-sion of allergic reactions and symptoms of upper respiratory tract infections (eg, urticaria, rhinitis, conjunctivitis); vertigo, nausea, and vomiting (eg, motion sickness, Ménière’s disease); sedation; sup-pression of cough; and dyskinesia (eg, parkinson-ism, drug-induced extrapyramidal side effects). Some of these actions are predictable from an understanding of histamine physiology, whereas others are the result of the drugs’ antimusca-rinic and antiserotonergic effects (Table 17–1). Although H1 blockers prevent the bronchocon-strictive response to histamine, they are ineffective in treating bronchial asthma, which is primar-ily due to other mediators. Likewise, H1 blockers will not completely prevent the hypotensive effect of histamine unless an H 2 blocker is administered concomitantly.

The antiemetic and mild hypnotic effects of antihistaminic drugs (particularly diphenhydr-amine, promethazine, and hydroxyzine) have led to their use for premedication. Although many H 1 blockers cause significant sedation, ventilatory drive is usually unaffected in the absence of other sedative medications. Promethazine and hydroxyzine were often combined with opioids to potentiate analge-sia. Newer (second-generation) antihistamines tend to produce little or no sedation because of limited penetration across the blood–brain barrier. This group of drugs is used primarily for allergic rhini-tis and urticaria. They include loratadine, fexofena-dine, and cetirizine. Many preparations for allergic rhinitis often also contain vasoconstrictors such as pseudoephedrine. Meclizine and dimenhydrinate are used primarily as an antiemetic, particularly for motion sickness, and in the management of ver-tigo. Cyproheptadine, which also has significant serotonin antagonist activity, has been used in the management of Cushing’s Disease, carcinoid syn-drome, and vascular (cluster) headaches.

The usual adult dose of diphenhydramine is 25– 50 mg (0.5–1.5 mg/kg) orally, intramuscularly, or intravenously every 4–6 h. The doses of other H1-receptor antagonists are listed in Table 17–1.

The sedative effects of H1-receptor antagonists can potentiate other central nervous system depressants such as barbiturates, benzodiazepines, and opioids.