Applications of IR-Spectroscopy in Analytical Chemistry

The technique of infrared spectroscopy has been adequately exploited in the domain of analytical chemistry. This aspect is duly expatiated with the aid of the following typical examples, namely :

APPLICATIONS OF IR-SPECTROSCOPY IN ANALYTICAL CHEMISTRY

The technique of infrared spectroscopy has been adequately exploited in the domain of analytical chemistry. This aspect is duly expatiated with the aid of the following typical examples, namely :

It is a gonad stimulating principle.

Theory : It is an established fact that cis- and trans-substituted double bonds have slightly different absorption bands in the region of 13 μ m. This specific feature forms the basis of the present determination.

Besides, the pharmacological actions of many compounds are invariably dependent on the shape of molecules and hence, usually play a very significant role. Therefore, if both cis- and trans-isomers are pro-duced in the course of a particular synthesis it may be absolutely necessary to incorporate in the product profile a specific test for the relative proportions of one to the other. This type of ‘control measure’ strictly conforms the uniformity of composition in the bulk-drug industry and ensures a check on the batch-to-batch variation.

Procedure : Dissolve accurately 22.5 mg of trans-clomiphene citrate and 52.5 mg of cis-clomiphene citrate (approx. 1 : 2.3) into 10 ml of DW in a clean 50 ml separating funnel. Add to it 1 ml solution of sodium hydroxide (5% w/v in DW). In the alkaline medium the base is liberated which is extracted successively with 3 portions of solvent ether (10 ml each). The combined ethereal layer is washed with two portions of DW (10 ml each). The resulting ethereal fraction is dried over anhydrous sodium sulphate, filter, evaporate to dryness carefully over an electric water-bath and dissolve the residue in 1 ml of CS2. Now, record the absorp-tion curve in a 0.2 mm cell over the range 12.50 to 14.00 μ m. Calculate the absorbance for the peaks at 13.16 and 13.51 μ m respectively by employing the base-line method between the minima at 12.66 and 13.89 μ m.

with regard to each assay and therefrom confirm at the ratios of the sample falls very much within the ratios for the standards thereby indicating that the sample contains 50-70% cis-clomiphene citrate.

2. TO DISTINGUISH AND CHARACTERIZE THE PRI-, SEC-AND TERT-AMINE SALTS FROM ONE ANOTHER

3. IR-SPECTROSCOPY IN THE STUDY OF COMPLEX FORMATIONS

The IR-spectroscopy has been judiciously used for the study of complex formations.

acids under appropriate conditions to result in the formation of a deep blue complex. This reaction is so sensitive that it forms the basis of quantitative complex formation studies by IR-spectroscopy.

(b) 1 : 10-Phenanthrolin : reacts with Fe2+ ion quantitatively to give rise to a deep red complex due to formation of phenanthroline-ferrous complex, which being extremely sensitive in nature is usually exploited as the basis of quantitative complex formation studies by IR-spectroscopy.

IR-spectroscopy technique has been used meaningfully in the qualitative reaction sequence studies with regard to various organic synthesis, namely : reduction of —NO2 group to —NH2 ; reduction of

5. IR-SPECTROSCOPY IN THE IDENTIFICATION OF FUNCTIONAL GROUPS

A few salient features in this context are, namely :

(a) The absence of a specific characteristic absorption may be more informative than its presence, e.g., the presence vis-a-vis absence of a C = O str. absorption.

(c) Graphically presented correlation tables, as cited in specialist texts of Cross, Bellamy and Van der Mass, are found to be fairly precise and accurate for the critical identification of functional groups. It is, however, pertinent to mention here that the degree of accuracy lies between ± 5 cm –1 for ordinary routine IR-spectrophotometers having lesser observed accuracy at higher frequencies.

(d) Keeping in view the vast wealth of expertise and experience, it may be inferred that the maximum weightage can be solely rested on the absorptions either below 900 cm–1, or above 1400 cm–1, for obvious reasons as the ‘fingerprint region’ 900-1400 cm–1 mainly contains a plethora of unas-signed absorptions.

: It affords group frequencies due to C = O str., and C—O str. and hence more readily identified than the ketones (C = O str.)

The ‘fingerprint region’ lies between 1300-400 cm–1 which is considered to be the most valuable component of the spectra and mainly comprises of a specifically large number of unassigned vibrations. Therefore, IR-spectroscopy aids in the identification of unknown compound by comparing its spectrum with a standard spectra recorded under exactly similar experimental parameters. Thus, pharmaceutical substances that exhibit the same infrared spectra may be inferred as identical.

Precisely in the domain of analysis by physico chemical property IR-spectroscopy offers a far more characteristic, valid and qualified ‘proof of identity’ than the comparison of any other physical property.

Precautions : Certain precautions may be observed readily so as to obtain really identical spectra, namely :

(a) Sampling to be done under identical conditions,

(b) Same IR-spectrophotometer may be used for obtaining the various spectra, (c) Experimental parameters like : slit-width, scan-speed etc., must be identical,

(d) An attempt should be made to obtain the maximum number of peaks in the ‘fingerprint region’ thereby ascertaining the proof of identity more confidently.

Computer Aided Analysis : With the advent of spectacular and quantum jump in the field of instru-ment technology over the past two decades a good number of world-renowned manufacturers, such as : Beckman, Bio-Rad, Brüker, Cecil, Hitachi, Nicolet, Perkin-Elmer, Schumadzu have introduced various so-phisticated fully computerized FT-IR spectrophotometers. These instruments have the advantage of storing in their computer-memory-banks of sizable number of digitalized information obtained from the infrared spectra of standard compounds. Now, with the flick of a keyboard button the spectrum of an unknown compound, previously fed to the same digital storage bank, may be conveniently compared with the stand-ards and finally to get at the identical infrared absorptions to the unknown.

There exist no hard and fast rules with regard to the interpretation of an IR-spectrum, but based on the vast wealth of experience and wisdom of the analyst amalgamated with a storehouse of general observations go a long way towards the exact interpretation of the same. However, following different aspects must be taken into consideration while interpreting the spectrum :

(a)       In usual practice, the absence of a strong group absorption definitely indicates the absence of that group in the molecule, based on the assumption that no other factors are influencing which might shift the absorption band to the other regions e.g., hydrogen bonding. In other words, intramolecular or intermolecular changes caused due to the hydrogen bonding help in shifting the expected absorption band either to the higher region or to the lower region. For instance : the clear absence of a sharp and strong absorption band in the region 1850-1640 cm–1 (or 5.40-650 μ) completely excludes the possibility of carbonyl groups from the molecular structure under investigation.

(c) ‘Fingerprint Region’ i.e., the intervening region 1300-400 cm–1 essentially provides very useful information, specifically when examined with reference to bands in the lower and higher regions. It frequently consists of a relatively large number of bands the origin of which is neither located nor determined so easily. Broadly speaking, the ‘fingerprint region’ helps in the identification of unknown pharmaceutical substances with the aid of reference samples and comparing the two spectra by superimposing them on one another. For this reason many official compendia like BP, USP provide the spectra of many pure and authentic pharmaceutical substances that may be com-pared with the ones under investigation.

(d) Assignment of Bands to Specific Groups by Employing Isotopes : Deuterium exchange is specifically beneficial for assignment to A-H vibrations in a situation where the hydrogen is ex-changeable.

For a simple diatomic molecule X-Y the sole vibration which may take place in a periodic stretch-ing along the X-Y band. Thus, the stretching vibrations may be visualized as the oscillations of two entities connected by a spring and the same mathematical treatment, known as Hooke’s Law, holds good to a first approximation. Hence, for stretching of the band X-Y, the vibrational fre-quency (cm–1) may be expressed by the following equation :

Therefore, for bands having the same force constant k :

Thus, it may be shown that the absorption frequencies for a bond involving deuterium are, to a rough approximation 1/√2 times the frequencies of the corresponding bonds involving hydrogen.

In addition to the above cited typical instances the hydrogen bonding can also be studied at length by subsequent replacement of proton by deuterium.

(e) Assignment of Bands to Specific Groups by Affecting Chemical Changes : Various chemical changes brought about in the organic compounds may be assigned different absorption peaks on the specific modified chemical entities. This can be explained with the help of the examples, namely : 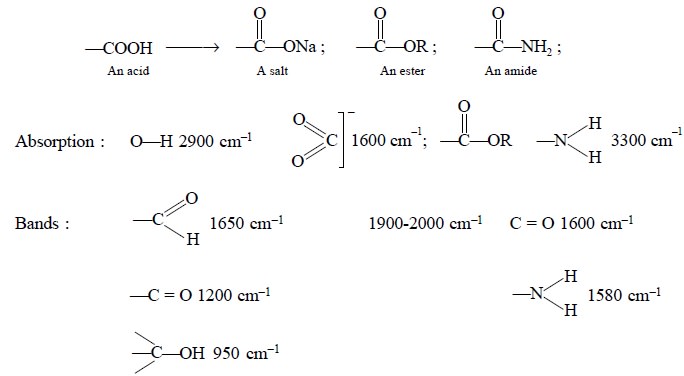 (ii)       Conversion of an Amino Acid to its corresponding hydrochloride or salt :