Applications of IR-Spectroscopy in Pharmaceutical Assays

APPLICATIONS OF IR-SPECTROSCOPY IN PHARMACEUTICAL ASSAYS

1. APPLICATIONS OF IR-SPECTROSCOPY IN THE ANALYSIS OF PHARMACEUTICAL SUBSTANCES

A host of pharmaceutical substances can be identified and critically examined with the help of infra-red spectroscopy. Hence, the latest versions of British Pharmacopoeia (BP) and United States Pharmaco-poeia (USP) contain the complete IR-spectrum of such pure pharmaceutical substances that are essentially included in the respective official compendium. These authentic IR-spectra are profusely used in many well-equipped Quality Assurance Laboratories in checking the purity of commercially available drugs before employing them in various formulations.

Following is the detailed procedure laid out in the Pharmacopoeia of India (IP) for the preparation of KBr-disc or KCl-disc :

Procedure : Triturate about 1 mg of the pharmaceutical substance with approximately 300 mg of dry, finely powdered KBr or KCl of spectroscopic grade, as directed. Grind the mixture thoroughly, spread it uniformly in a suitable die and compress under vacuum at a pressure of about 10 t in–2. Mount the resultant disc in a suitable holder in the spectrophotometer and obtain the IR-spectrum.

Precautions : The following precautions may be observed carefully :

(i) Several factors e.g. excessive or insufficient grinding, absorption of moisture or other impurities in the halide carrier, may ultimately result in the formation of unsatisfactory discs,

(ii) Unless its preparation presents certain specific difficulties a disc should be rejected if visual in-spection shows lack of uniformity, or if the transmittance at about 2000 cm–1 (5 μ m) in the absence of a specific absorption band is less than 75% without compensation, and

(iii) If the other ingredients of tablets, injections or other dosage forms are not completely removed from the substance being examined, they may contribute to the spectrum.

Example : The infrared absorption spectrum of the following pharmaceutical substances do exhibit maxima which are only at the same wavelengths as, and have similar relative intensities to those in the spectrum of the corresponding reference samples, namely :

2. APPLICATIONS OF IR-SPECTROSCOPY IN THE ANALYSIS OF PHARMACEUTICAL DOSAGE FORMS

A number of pharmaceutical dosage forms can be assayed conveniently with the help of IR-spectroscopy. A few typical examples are enumerated below for ready reference, namely :

2.1. Determination of Aspirin, Phenacetin and Caffeine in Tablets

Theory : The quantitation is solely based on the intensities of the carbonyl bands at 1764, 1511 and 1665 cm–1 for aspirin, phenacetin and caffeine respectively.

Procedure : The drug contents of an appropriate number of tablets are directly extracted into chloro-form, filtered if necessary so as to remove the insoluble tablet components, and the final concentration of chloroform solution is made in such a way so that it should contain : 90 mg ml–1 of aspirin ; 64 mg ml–1 of phenacetin, and 134 mg ml–1 of caffeine. The IR-spectrum is now recorded in a 0.1 mm NaCl-cell between 1400-2000 cm–1

2.2. Determination of Codeine Phosphate in Tablets

Codeine phosphate was duly extracted into CS2 and quantitatively determined by measuring its ab-sorption at 942 cm–1.

2.3. Determination of Meprobamate in Tablets

at 1582 cm–1. Later Shearken (1968) adopted a modified method of assay by using chloroform as an extracting medium, but instead of the carbonyl band measured the N—H stretching band at 3436 cm–1. However, this particular method essentially requires the complete removal of both water and ethanol ; the latter is present in CHCl3 as a stabilizer which is required to be eliminated completely to avoid interference from O—H stretching bands. To achieve this objective activated alumina columns have been used extensively. However, Zappala and Post(1977) got rid of the interferences occurring at lower frequencies by measuring meprobamates by employing the primary amine combination band at 5107 cm–1 in the near IR region. 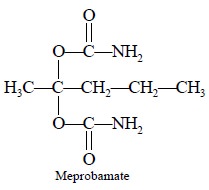 The USP (XIX) and NF (XIV) have described the assays of various pharmaceutical dosage forms in appropriate solvent at different frequencies (cm–1). A few typical examples are given in Table 22.2. 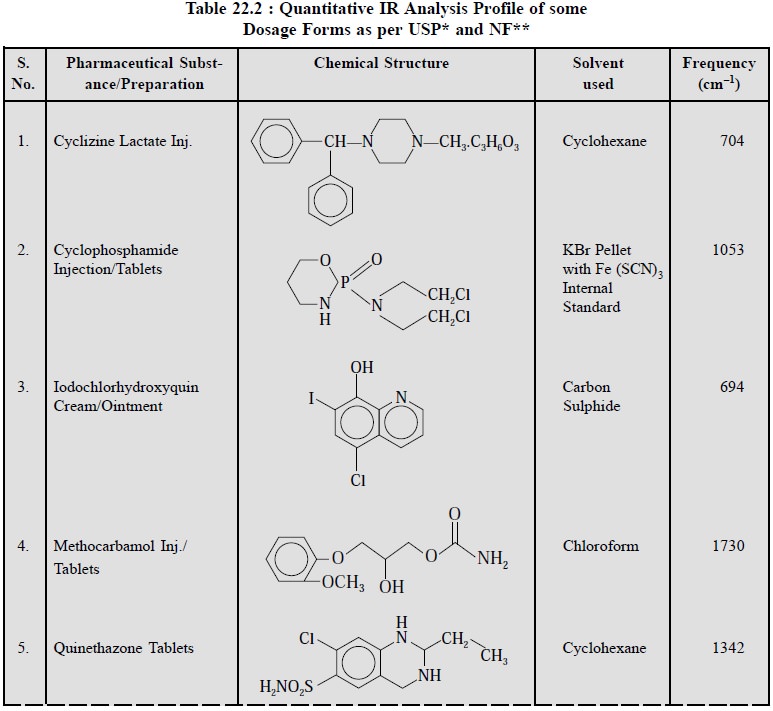