(a) Single-Monochromator Infrared Spectrophotometer, and

The optical diagrams, components used and their modes of operation shall be discussed briefly in this context under different heads.

The important features of an infrared spectrophotometer are as follows :

The most common infrared sources are electrically heated rods of the following types :

(b) Silicon Carbide ‘Globar’, and

It is quite evident that the infrared output from all these different sources invariably varies in intensity over a definite frequency range, therefore, a compensating variable slit is usually programmed to operate in unison with the scanning over the individual frequencies.

Three types of substances are normally employed as monochromators, namely :

There are ion all three different types of detectors that are used in the infrared region :

(a) Thermocouples (or Thermopiles) : The underlying principle of a thermocouple is that if two dissimilar metal wires are joined head to tail, then a difference in temperature between head and tail causes a current to flow in the wires. In the infrared spectrophotometer this current shall be directly proportional to the intensity of radiation falling on the thermocouple. Hence, the thermo-couples are invariably employed in the infrared region, and to help in the complete absorption of ‘available energy’ the ‘hot’ junction or receiver is normally blackened.

(b) Golay Detector : In this specific instance the absorption of infrared radiation affords expansion of an inert gas in a cell-chamber. One wall of the cell-chamber is provided with a flexible mirror and the resulting distortion alters the intensity of illumination falling on a photocell from a reflected beam of light. Thus, the current from the photocell is directly proportional to the incident radiation.

(c) Bolometers : These are based on the principle that make use of the increase in resistance of a metal with increase in temperature. For instance, when the two platinum foils are appropriately incorporated into a Wheatstone bridge, and radiation is allowed to fall on the foil, a change in the resistance is observed ultimately. This causes an out-of-balance current that is directly propor-tional to the incidental radiation. Just like the thermocouples, they are used in the infrared region

The schematic layout of a single-monochromator infrared spectrophotometer has been duly depicted in Figure 22.2. 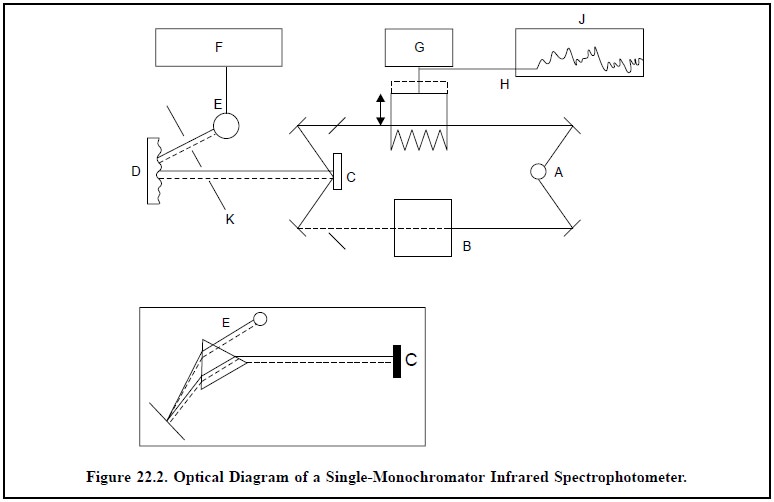 The various vital components of Figure 22.2 are as follows :

The sequential steps observed in the mode of operation are as stated below :

(i) The light from infrared source A is split equally into two beams ; one of which B is made to pass through the sample i.e., the sample beam while the other serves as reference beam.

The main objective of such a double beam operation is to measure the difference in intensities between the two beams at each wave length.

(ii) The two beams are subsequently reflected on a rotating segmented mirror called chopper C. The chopper rotating ≈ 10 times per second helps the sample beam and the reference beam to be reflected alternatively to the monochromator grating D.

(iv) When a sample has absorbed a certain quantum of light of specific frequency the detector shall be receiving alternatively from the chopper an intense beam (due to reference beam) and a relatively weak beam (due to sample beam). It will generate a pulsating or alternating current (AC) flowing from the detector to the amplifier F.

(v) This out-of-balance signal received by the amplifier, is coupled to a small servo-motor G, that drives an optical wedge (H) into the reference beam until the detector receives light of equal intensity from sample and reference beams.

(vi) The slightest movement of the wedge (or attenuator) is further coupled to a ink-pen recorder J, so that movement of the former, both ‘in’ and ‘out’ of the reference beam, is adequately recorded on the printed chart at various absorption bands.

This specific type of the ‘double-beam optical-null recording spectrophotometer’ is termed so because it critically balances out by the help of optical means the differential between the two beams.

The ‘inset diagram’ in Figure 22.2 shows the use of a ‘prism’ in place of the ‘grating’. However, underlying principle being identical, a rotating mirror affords the scanning of individual frequencies.

The schematic optical diagram of a double-beam infrared spectrophotometer has been shown in Fig-ure 22.3 as per Beckman Model IR-9. 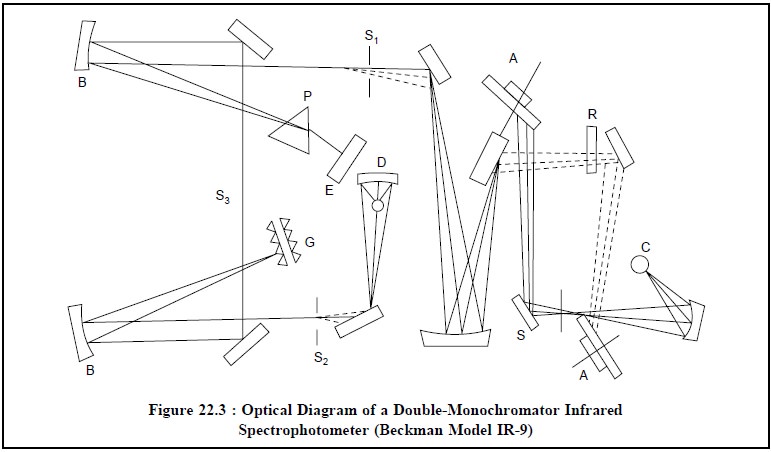 The various components of a double-monochromator infrared spectrophotometer shown in Figure 22.3 are as follows below :

The various steps that may be followed sequentially to operate a double-monochromator infrared spectrophotometer are described below :

(i) The light from the infrared source C is made to split into two beams one of which passes through the sample (i.e., the sample beam) while the other caters as the reference beam. This sort of dou-ble-beam arrangement facilitates in measuring difference in intensities between the two beams at each wavelength,

(ii) In this instance two monochromators have been employed in series with an intermediate slit (S3) as shown in Figure 22.3,

(iii) The optical train affords as much as twice the dispersion and the ultimate resolution is fairly comparable to any single-monochromator instrument (Figure 22.2),

(v) In Figure 22.3, (Beckman Model IR-9) one of the two prism monochromators has been replaced with a dual grating, and

(vi) Finally, the detector picks up light of equal intensity from sample and reference beams.

In usual practice, there are two methods that are frequently employed for the determination of the transmittance ratio in quantitative analysis namely :

(a) Emperical ratio method, and

The above two methods shall be discussed briefly with the help of certain typical examples as detailed below :

This particular method is often employed in a situation where the absorption bands of the analyte are found to be very close to those of the main constituent or the internal standard.

The quantitative analysis of pharmaceutical substances may be achieved by emperical-ratio method either by plotting percentage transmittance against wavelength or by plotting the log T1o/T1 against concen-tration as illustrated in Figure 22.4. 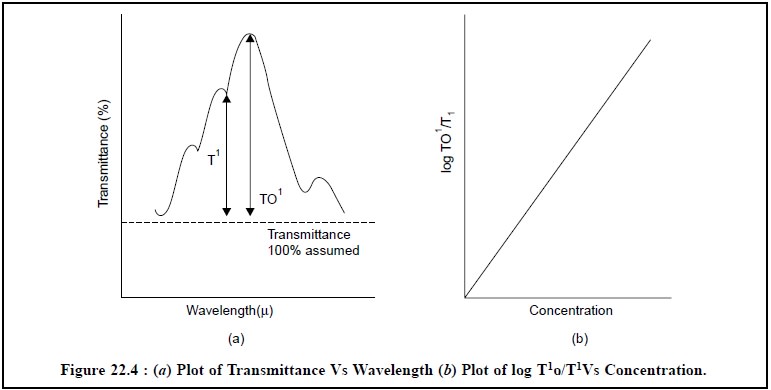 It essentially involves the selection of an absorption band of an analyte which does not remain very close to the bands of other constituents present in the matrix.

Figure 22.5 depicts the absorption bands of the sodium salt of Penicillin G at 703 cm–1. 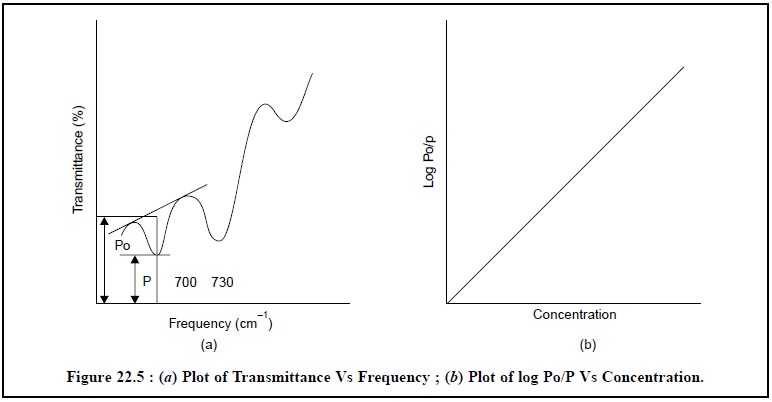 The value of the incident radiant energy Po may be achieved by drawing a straight line tangent to the spectral absorption curve at the position of the analyte’s absorption band. Consequently the transmittance P is usually measured at the point of maximum absorption. Finally, the value of log Po/P is plotted against the concentration as shown in Figure 22.5.

It is, however, pertinent to mention here that the application of both emperical ratio method and base-line method help in eliminating to a great extent the errors caused due to changes in source intensity and adjustment of the optical system.

1.6. Determination of the Absorption Spectrum of a Solid Compound (or a Pharmaceu-tical Substance)

The determination of the absorption spectrum of a solid pharmaceutical substance is invariably ac-complished by any one of the two following techniques namely :

(a) Mull Technique, and

These two different techniques shall be described below :

Procedure : Take about 15-20 mg of sample in a previously cleaned small agate mortar and powder it thoroughly (about 200 mesh). Add to it 2 drops of purified paraffin (commonly known as Nujol) or any other suitable mulling liquid and continue the trituration until a very smooth paste of uniform consistency is achieved. Now, transfer the slurry to a sodium chloride window, placing it carefully into the cavity made by the spacer. Consequently, place the other window on top and thus assemble the cell. With the help of a clean piece of tissue-paper wipe out the excess paste that has squeezed out from the cell windows. Finally, intro-duce the cell in the respective cell-compartment.

Salient Features : The salient features of Mull Technique are as follows :

(i) Particle size of the sample has got to be reduced below 200 mesh or 3 μ m so as to avoid scattering of radiation thereby causing poor absorption spectrum.

Procedure : For a window of diameter 1.3 cm, take 100 mg of spectroscopic grade KBr in a previ-ously cleaned agate pestle and mortar and grind it thoroughly with 0.05-0.5 mg of the sample. Now, carefully place the sample mixture into the pressing chamber of the mould in such a manner that it is held between the polished surfaces of the bottom and top pressing dies. Subsequently, attach the chamber to the vacuum line and switch-on the vacuum pump ; initially applying a slight negative pressure so as to compact the powder and then gradually increasing it to ≤ 15 mm Hg for 30 seconds. Finally, enhance the pressing force to 100,000 lb/in2 or 10-12 tons/in2 for a period of 1-2 minutes. Carefully, release the pressure and dismantle the dies. Now, remove the window from the mould and keep it in position onto the sample holder.

Salient Features : The salient features of KBr-disc technique are stated below :

(i) There exists a possibility of interaction between vibrations of the sample and the potassium halide lattice,

(ii) It is considered to be the most suitable method for other screening of very minute quantities of substances being eluted from the columns in Gas Liquid Chromatography (GLC). In actual prac-tice, about 300 mg of the spectroscopic grade KBr is placed in a short column immediately after the detector. Consequently, the solid is powdered, pressed into a disc in the normal procedure and ultimately the absorption spectrum of the trapped substance is studied,

(iii) It enjoys the advantage of producing spectra absolutely free from any solvent peaks (unlike Mull Technique) and hence it is employed extensively in routine analysis.

Internal Standard for KBr-Disc Technique : In quantitative analysis it is essential to examine absolutely uniform discs of identical weights. To achieve this, known weights of both KBr and analyte are required in the preparation of the KBr-disc and finally from the absorption data a calibration-curve may be obtained. In this process, it is a must to weigh the discs and also to measure their thickness at different points on their surface with the help of a dual micrometer. In order to overcome this tedious process of measuring disc thickness carefully the use of an internal standard has been introduced.

Potassium thiocyanate (KSCN) is considered to be the choicest internal standard. In usual prac-tice, it must be preground, dried and subsequently reground, and used at a concentration of 0.2% (w/w) along with the dried spectroscopic grade KBr. The mixture of KBr-KSCN is stored over P2O5.

Procedure : A standard calibration curve is plotted by thoroughly mixing together about 10% (w/w) of the analyte with the KBr-KSCN mixture and then grinding the same intimately. Now, the ratio of the thiocyanate absorption at 2125 cm–1 to a selected band absorption of the analyte is plotted against the percent concentration of the sample. Likewise, an identical disc is prepared with the unknown sample and the same KBr-KSCN mixture. Finally, its absorbance ratio is determined and the concentration (of unknown sample) is read off directly from the standard calibration curve.

The wavelength (or wave number) scale calibration of infrared spectrophotometers is usually carried out with the aid of a strip of polystyrene film fixed on a frame. It consists of several sharp absorption bands, the wavelengths of which are known accurately and precisely. Basically, all IR-spectrophotometers need to be calibrated periodically as per the specific instructions so as to ascertain their accuracy and precision.