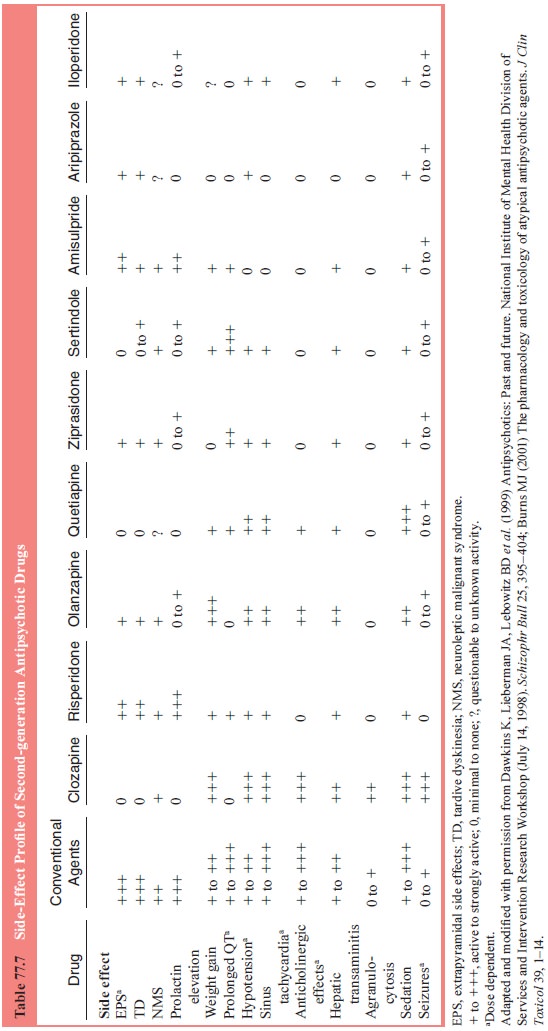 Tardive Dyskinesia and Other Tardive Syndromes

TD is a repetitive, involuntary, hyperkinetic movement disorder caused by sustained exposure to antipsychotic medication. TD is characterized by choreiform movements, tics and grimaces of the orofacial muscles, and dyskinesia of distal limbs, often the paraspinal muscles, and occasionally the diaphragm (Glazer, 2000). Younger patients with TD tend to exhibit slower athetoid movements of the trunk, extremities and neck (Marder, 1997). In addition to the more frequently observed orofacial and chore-oathetoid signs of TD, tardive dystonias (sustained abnormal postures or positions) and tardive akathisia (persistent subjec-tive and/or objective signs of restlessness) have been described (Casey, 1999). The abnormal movements of TD are usually in-creased with emotional arousal and are absent when the individ-ual is asleep (Marder, 1997). According to the diagnostic criteria proposed by Schooler and Kane (1982), the movements should be present for at least 4 weeks, and exposure to antipsychotic drugs should have totaled at least 3 months. The onset of the abnormal movements should occur either while the patient is receiving an antipsychotic agent or within a few weeks of discontinuing the offending agent.

Prevalence surveys indicate that mild forms of TD occur in approximately 20% of patients who receive chronic treatment with conventional antipsychotic medication (Kane and Lieber-man, 1992; Casey, 1995). Among the most significant predictors of TD are older age, female gender, presence of EPS, diabetes mellitus, affective disorders and certain parameters of neurolep-tic exposure such as dose and duration of therapy (Casey, 1999).

For most patients, TD dose not appear to be progressive or irreversible (Gardos et al., 1994). The onset of TD often tends to be insidious with a fluctuating course (American Psychiatric Association Task Force, 1992). With time, TD will either stabi-lize or improve even if the antipsychotic medication is continued, although there are reports of TD worsening during continued drug therapy (American Psychiatric Association Task Force on TD, 1992; Gardos et al., 1994). After discontinuation of antipsy-chotic medication, a significant proportion of patients with TD will have remission of symptoms, especially if the TD is of recent onset or the patient is young (Glazer et al., 1984). Unfortunately, withdrawal of antipsychotic agents is seldom an option for pa-tients with serious psychosis (Marder, 1997).

The American Psychiatric Association Task Force on TD (1992) issued a report in which a number of recommendations were made for preventing and managing TD. These include 1) establishing objective evidence that antipsychotic medications are effective for an individual; 2) using the lowest effective dose of antipsychotic drugs; 3) prescribing cautiously for children, elderly patients, and patients with mood disorders; 4) examining patients on a regular basis for evidence of TD; 5) considering alternatives to antipsychotic drugs, obtaining informed consent and also considering a reduction in dosage when TD is diag-nosed; and 6) considering a number of options if the TD worsens, including discontinuing the antipsychotic medication, switching to a different drug, or considering a trial of clozapine.

Although a large number of agents have been studied for their therapeutic effects on TD, there is no definitive drug treat-ment for it (American Psychiatric Association, 2000). Second-generation antipsychotics, in particular clozapine, have been used in clinical practice to treat TD, but there have been no adequately controlled trials to date support this practice. Casey (1999), how-ever, suggested that second-generation antipsychotics should be used as first-line treatment for patients who have TD or are at risk for TD. Guidelines for treating TD recommend using sec-ond-generation agents for mild TD symptoms, and clozapine or a newer agent for more severe symptoms (McEvoy et al., 1999).

Neuroleptic malignant syndrome (NMS), another type of acute EPS, is characterized by the triad of rigidity, hyperthermia (101– 104 F), and autonomic instability in association with the use of an antipsychotic medication (American Psychiatric Association, 1994). NMS is often associated with elevation of creatine kinase (greater than 300 U/mL), leukocytosis (greater than 15 000 mm3) and change in level of consciousness (American Psychiatric As-sociation, 2000). NMS can be of sudden and unpredictable onset, usually occurring early in the course of antipsychotic treatment, and can be fatal in 5 to 20% of untreated cases (American Psychi-atric Association, 2000).

The incidence of NMS varies from 0.02 to 3.23%, reflect-ing differences in criteria (Caroff and Mann, 1993). Prevalence rates are unknown, but are estimated to vary from 1 to 2% of pa-tients treated with antipsychotic medication (American Psychi-atric Association, 2000). The relative risk of second-generation antipsychotics for NMS is likely to be lower, but conclusive data is not yet available (Burns, 2001). NMS has been reported with clozapine, risperidone, olanzapine and quetiapine (Burns, 2001). Proposed risk factors include prior episode of NMS, younger age, male gender, physical illness, dehydration, use of high-potency antipsychotics, rapid dose titration, use of parenteral (IM) prepa-rations and preexisting neurological disability (Caroff and Mann, 1993; American Psychiatric Association, 2000).

If NMS is suspected, the offending antipsychotic agent should be discontinued and supportive and symptomatic treat-ment started (Marder 1997). Both dantrolene and dopamine ago-nists such as bromocriptine have also been used in the treatment of NMS (American Psychiatric Association, 2000). These agents, however, have not shown greater efficacy compared with sup-portive treatment (Caroff and Mann, 1993; Levenson, 1985).

The usual course of treatment is between 5 and 10 days. Long-acting depot preparations will prolong recovery time. After several weeks of recovery, treatment may be cautiously resumed with a different antipsychotic medication with gradually in-creased doses (American Psychiatric Association, 2000).

Various degrees of weight gain have been recognized as a com-mon problem with conventional antipsychotic medications. Weight gain is an important issue in the management of patients, because this adverse effect may be associated with noncompli-ance and certain medical illnesses, such as diabetes mellitus, cardiovascular disease, certain cancers and osteoarthritis (Lader, 1999; Sussman, 2001; Kurzthaler and Fleischhacker, 2001).

Antipsychotic medications may cause blood dyscrasias, includ-ing neutropenia, leukopenia, leukocytosis, thrombopenia and agranulocytosis. Leukopenia, usually transient, commonly oc-curs early in treatment, and resolves spontaneously. Chlorpro-mazine has been associated with benign leukopenia, which oc-curs in up to 10% of patients (American Psychiatric Association, 2000; Kane and Lieberman, 1992). This phenomenon is even more common following clozapine administration (Hummer et al., 1994).

Agranulocytosis (granulocyte count less than 500/mm3) is a fatal side effect of antipsychotic drugs. Approximately 0.32% of patients receiving chlorpromazine, and 1% treated with clozapine will experience agranulocytosis (American Psychiatric Associa-tion, 2000; Lieberman et al., 1989). The risk of agranulocytosis is greatest early in treatment, usually within the first 8 to 12 weeks of treatment (Novartis Pharmaceuticals, 2000). It tends to occur slightly more often in women, the elderly and young patients (less than 21 years old). Agranulocytosis from clozapine is usually re-versible if the drug is withdrawn immediately (Lieberman et al., 1988). Olanzapine is not associated with severe agranulocytosis (Beasley et al., 1996a, 1996b; Dossenbach et al., 2000). Despite these encouraging studies, there are a number of case studies re-porting agranulocytosis during treatment with olanzapine (and quetiapine) in patients who had suffered this adverse event dur-ing previous clozapine exposure (Tolosa-Vilella et al., 2002).

Before initiating treatment with clozapine, patients in the USA must be registered in a program that ensures that they receive weekly monitoring of their white blood cell (WBC) count during the first 6 months of treatment (Marder, 1997). Clozapine is prescribed on a weekly basis unless the WBC count is less than 3500/mm3 or if there is a substantial drop in the WBC count (Marder, 1997). If the WBC count is 3000 to 3500/mm3 and the absolute neutrophil count (ANC) is greater than 1500/mm3, patients should be monitored twice weekly. If the WBC count is 2000 to 3000/mm3 or the ANC count is 1000 to 1500/mm3, clozapine treatment should be discontinued and patients should be monitored daily. If the WBC count falls be-low 2000/mm3 or the ANC is less than 1000/mm3, clozapine should be discontinued and bone marrow aspiration should be considered (American Psychiatric Association, 2000). If this occurs, the patient should be given immediate intensive treat-ment and considered protective isolation. Current guidelines require weekly monitoring for 1 month after the termination of clozapine treatment (American Psychiatric Association, 2000). Guidelines on the use of clozapine vary between dif-ferent countries.

Sedation is the single most common side effect among low-potency conventional antipsychotics, as well as clozapine, zoteapine and quetiapine (American Psychiatric Association, 2000; Young et al., 1998). Although sedation is often beneficial at the beginning of treatment to calm down an anxious or ag-gressive patient, it usually impairs functioning during long-term treatment (Hummer and Fleischhacker, 2000). Most patients usually develop tolerance over time, or it may be possible to minimize sedation by dose reduction or by shifting most of the medication to night to reduce daytime sleepiness (Hummer and Fleischhacker, 2000).

Antipsychotic medications can lower the seizure thresh-old to some degree (Kane and Lieberman, 1992). Seizure is more common with low-potency first-generation antipsychotics and clozapine (American Psychiatric Association, 2000). Clozapine is associated with dose-related increase in seizures. For example, Devinsky and colleagues (1991) reported that doses of clozapine below 300 mg/day have a seizure rate of about 1%, doses between 300 and 600 mg/day have a seizure rate of 2.7%, and doses above 600 mg/day have a rate of 4.4%. Strategies to reduce the risk for seizures include slower dose titration, a lower dose and the addi-tion of an anticonvulsant agent (i.e., valproic acid) (Hummer and Fleischhacker, 2000).