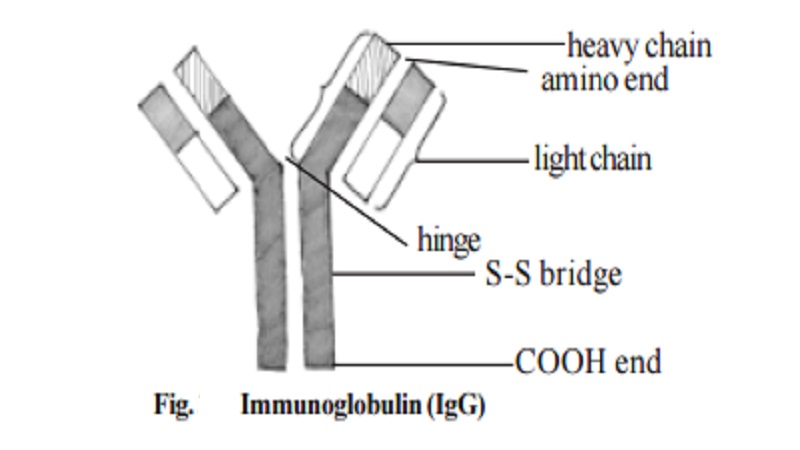 Immunoglobulins (Igs) are glycoproteins. Each molecule of Ig consists of two pairs of polypeptide chains of different sizes. The smaller chains are called ' light' (L) chains and the larger ones are called ' heavy' (H) chains. The L chain has a molecular weight of approximately 25,000 and the H chains is of 50,000.

Immunoglobulins (Igs) are glycoproteins. Each molecule of Ig consists of two pairs of polypeptide chains of different sizes. The smaller chains are called ' light' (L) chains and the larger ones are called ' heavy' (H) chains. The L chain has a molecular weight of approximately 25,000 and the H chains is of 50,000. The L chain is attached to the H chain by a disulphide bond. The two H chains are also joined together by S-S bonds, depending on the class of immunoglobulins. The H chains are structurally and antigenically distinct for each class and are designated by the Greek letter corresponding to the immunoglobulin class, as follows :

The L chains are similar in all classes of immunoglobulins. They occur in two varieties, kappa (k) and lambda (l). A molecule of immunoglobulin may have either kappa or lambda chains, but never both.

Each heavy and light chains consists of two regions viz.,

1.The variable (V) region or Fab region: The V region shows a wide variation in amino acid sequences in the amino or N-terminal portion of the molecule. These areas of high variability in the variable region of H and L chains are called ' hotspots' or hypervariable regions. These hotspots are most intimately involved in the information of the antigen-binding site. In both VH and VL regions of the chain atleast three hypervariable regions/ hotspots are present. The infinite range of the antibody specificity of immunoglobins depends on the variability of the amino acid sequences at the 'variable regions' of the H and L chains, which form the antigen combining sites (Paratope).

Depending on the observable reaction produced on mixing with anti-gens, the antibodies are designated variously asagglutinins, precipitins and so on. Sera having high antibody levels following infection or immunization are called immune sera oranti sera.

The replacement of a diseased organ by a transplant (healthy tissue or organ) is called transplantation. In the early 1940 Medawar explained the nature of graft (transplant) rejection while working with the burn patients of World War II. In his observations the following features were made clear. 1. graft of skin from one region of the body to another in the same patient was easily accepted, 2. grafts obtained from close relatives like brother or sister, were rejected 3. when a second graft was performed, by obtaining the tissue from the same donor, the rejection reaction occurred with greater intensity and speed. The graft or transplant leads to various complications in the host body. They are mediated by the host's immune response. Very often the transplant gets rejected or may lead to graft verses host reaction or disease. Before discussing the nature and implications of this rejection phenomenon let us look into the terms involved in various types of grafts.