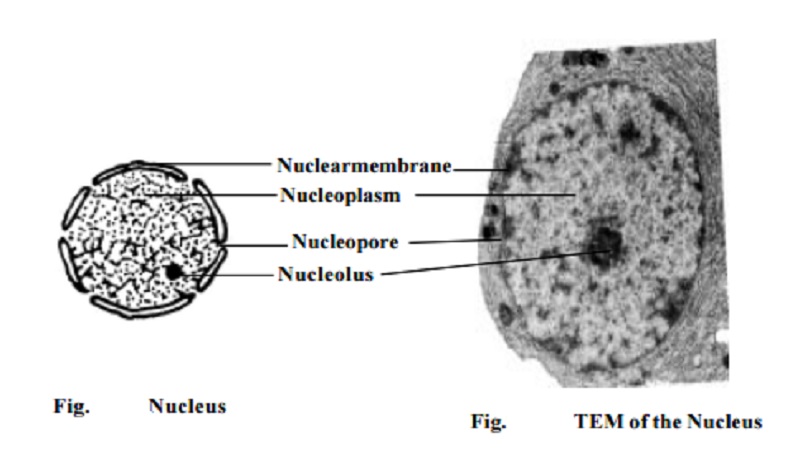 The nucleus is the most important organelle of cell. It controls all meta-bolic processes and hereditary activities of the cell. The nucleus was first discovered and named by Robert Brown in 1833. The occurrence of a nuclear membrane was first revealed by O. Hertwig in 1893.

The nucleus is the most important organelle of cell. It controls all meta-bolic processes and hereditary activities of the cell.

The nucleus was first discovered and named by Robert Brown in 1833. The occurrence of a nuclear membrane was first revealed by O. Hertwig in 1893.

The nucleus is found in all the eukaryotic cells of plants and animals.

However some eukaryotic cells such as the sieve tubes of higher plants and mammalian erythrocytes have no nucleus.

Usually the cells contain single nucleus (mononucleate). However certain cells may have more than one nuclei. Accordingly they may be calledbinucleate or polynucleate cells. The polynucleate cells of the animals are called syncytial cells (Osteoblast cells)

The shape of the nucleus may be spherical, elliptical or discoidal. In certain cells the nucleus is irregular in shape.

The size of the nucleus may vary from 3 �m to 25 �m in diameter. The size is directly propotional to that of the cytoplasm. Nuclear size may also be determined by the number of chromosomes or ploidy. The nucleus of the hap-loid cells are smaller than that of the diploid cells.

The nucleus is surrounded by a nuclear envelope. This envelope is comprised of two membranes of 5-10 nm thickness. The inner nuclearmembrane supports a fibrous sheath called the nuclear lamina. The inner nuclear membrane is surrounded by the outer nuclear membrane. The space between the inner and outer membranes is known as perinuclear space. It is a 10 to 50 nm wide fluid filled compartment.

The nuclear lamina is a protein meshwork. It is a very dynamic structure.

The nucleus is filled with a transparent semisolid matrix known as nucleoplasm or nuclear sap. The chromatin threads and the nucleolus re-main suspendended in the nucleoplasm. The nucleoplasm is composed of nucle-oproteins, proteins, enzymes and minerals.

The nucleoplasm contains several thread like coiled structures. These are the chromatin fibres. During the cell division they become thick ribbon like structures known as chromosomes. The chromatin is made up of Deoxy - ribose nucleic acid (DNA) and proteins.

The nucleus contains one or more spherical colloidal structures called nucleoli. The size of nucleolus is related to the synthetic activity of the cell.The number of nucleoli in the cells may be one, two or four. Chemically, nucleo-lus contains DNA of nucleolar origin, four types rRNA, 70 types of ribosomal proteins, RNA binding proteins and RNA splicting nucleoproteins.

Ribosomal subunits are synthesized in the nucleolus. Initiation, pro-duction and maturation stages of ribosomal formation happen in three dis-tinct regions of the nucleolus.

The chromatin fibres get condensed into chromosomes during cell di-visions. They are capable of self-reproduction and they play an important rloe in heredity.

The nucleus was first observed and described by karl Nagli (1842) in the nuclei of plant cells. Chromosomes and their role in cell division was first explained by A. Schneider (1873). In 1887 Benden and Bovery reported that the number of chromosomes for each species is constant. T. H Morgan andH. Muller in 1922 revealed the occurrence of nearly 2000 genetic fac-tors on four chromosomes of Drosophila. In 1924, Robert Feulgen showed that chromosomes contain DNA.