Pulmonary embolism results from the entry of blood clots, fat, tumor cells, air, amniotic fluid, or foreign material into the venous system. Clots from the lower extremities, pelvic veins, or, less com-monly, the right side of the heart are usually respon-sible. Venous stasis or hypercoagulability is often contributory in such cases (Table24–5). Pulmonary embolism can also occur intraoperatively in normal individuals undergoing certain procedures. 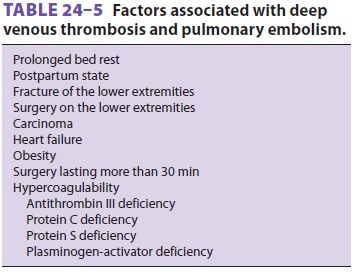 Embolic occlusions in the pulmonary circula-tion increase dead space, and, if minute ventilation does not change, this increase in dead space should theoretically increase Paco2. However, in practice, hypoxemia is more often seen. Pulmonary emboli acutely increase pulmonary vascular resistance by reducing the cross-sectional area of the pulmonary vasculature,causing reflex and humoral vasocon-striction. Localized or generalized reflex bronchoconstriction further increases areas with low (V/Q)ratios. The net effect is an increase in V/Q mismatch and hypoxemia. The affected area loses its surfactant within hours and may become atelectatic within 24–48 hr. Pulmonary infarction occurs if the embolus involves a large vessel and collateral blood flow from the bronchial circulation is insufficient for that part of the lung (incidence <10%). In previously healthy persons, occlusion of more than 50% of the pulmo-nary circulation (massive pulmonary embolism) is necessary before sustained pulmonary hypertension is seen. Patients with preexisting cardiac or pulmo-nary disease can develop acute pulmonary hyperten-sion with occlusions of lesser magnitude. A sustained increase in right ventricular afterload can precipitate acute right ventricular failure. If the patient survives acute pulmonary thromboembolism, the thrombus usually begins to resolve within 1–2 weeks.

Clinical manifestations of pulmonary embolism include sudden tachypnea, dyspnea, chest pain, or hemoptysis. The latter generally implies lung infarction. Symptoms are often absent or mild and nonspecific unless massive embolism has occurred. Wheezing may be present on auscultation. Arterial blood gas analysis typically shows mild hypox-emia with respiratory alkalosis (the latter due to an increase in ventilation). The chest radiograph is commonly normal, but may show an area of oli-gemia (radiolucency), a wedge-shaped density with an infarct, atelectasis with an elevated diaphragm, or an asymmetrically enlarged proximal pulmo-nary artery with acute pulmonary hypertension. Cardiac signs include tachycardia and wide fixed splitting of the S2 heart sound; hypotension with elevated central venous pressure is usually indica-tive of right ventricular failure. The electrocardio-gram frequently shows tachycardia and may show signs of acute cor pulmonale, such as new right axis deviation, right bundle branch block, and tall peaked T waves. Ultrasound studies of the lower extremities also may be helpful in demonstrating deep venous thrombosis. The diagnosis of embo-lism is more difficult to make intraoperatively .

Pulmonary angiography is still the gold stan-dard criterion for diagnosing a pulmonary embo-lism, but it is invasive and difficult to perform. Therefore, the less invasive spiral computed tomog-raphy angiography (CTA) is the initial imaging of choice in stable patients with suspected pulmonary embolism. Ventilation-perfusion (V/Q ) scanning may also be used when CTA cannot be performed. High-, intermediate-, and low-probability criteria have been established for the diagnosis of pulmonary embolism byV/Q scan.

The best treatment for pulmonary embolism is pre-vention. Heparin (unfractionated heparin 5000 U subcutaneously every 12 h begun preoperatively or immediately postoperatively in high-risk patients), enoxaparin or other related compounds, oral anti-coagulation (warfarin), aspirin, or dextran therapy, together with early ambulation, can all be used to reduce the incidence of deep vein thrombosis. The use of high elastic stockings and pneumatic com-pression of the legs may also decrease the incidenceof venous thrombosis in the legs, but not in the pel-vis or the heart.After a pulmonary embolism, systemic anti-coagulation prevents the formation of new blood clots or the extension of existing clots. Heparin therapy is begun with the goal of achieving an acti-vated partial thromboplastin time of 1.5–2.4 times normal. Low molecular-weight heparin (LMWH) is as effective and is given subcutaneously at a fixed dose (based on body weight) without labo-ratory monitoring. In high-risk patients, LMWH is started either 12 hr before surgery, 12–24 hr after surgery, or at 50% the usual dose 4–6 hr after surgery. All patients should start warfarin therapy concurrent with starting heparin therapy, and the two should overlap for 4–5 days. The international normalized ratio should be within the therapeu-tic range on two consecutive measurements, at least 24 hr apart, before the heparin is stopped. Warfarin should be continued for 3–12 months. Thrombolytic therapy with tissue plasminogen activator or streptokinase is indicated in patients with massive pulmonary embolism or circula-tory collapse. Recent surgery and active bleed-ing are contraindications to anticoagulation and thrombolytic therapy. In these cases, an inferior vena cava umbrella filter may be placed to prevent recurrent pulmonary emboli. Pulmonary embo-lectomy may be indicated for patients with mas-sive embolism in whom thrombolytic therapy is contraindicated.

Patients with acute pulmonary embolism may pres-ent in the operating room for placement of an IVC filter, or, rarely, for pulmonary embolectomy. In most instances, the patient will have a history of pulmonary embolism and presents for unrelated surgery; in this group of patients, the risk of inter-rupting anticoagulant therapy perioperatively is unknown. If the acute episode is more than 1 year old, the risk of temporarily stopping anticoagulant therapy is probably small. Moreover, except in the case of chronic recurrent pulmonary emboli, pul-monary function has usually returned to normal. The emphasis in the perioperative management of these patients should be in preventing new episodes of embolism (see above).

Patients presenting for pulmonary embo-lectomy are critically ill. They are usually already intubated, but tolerate positive-pressure ventila-tion poorly. Inotropic support is necessary until the clot is removed. They also tolerate all anesthetic agents very poorly. Small doses of an opioid, etomi-date, or ketamine may be used, but the latter can theoretically increase pulmonary artery pressures. Cardiopulmonary bypass is required.

Significant pulmonary embolism is a rare occurrence during anesthesia. Diagnosis requires a high index of suspicion. Air emboli are common, but are often overlooked unless large amounts are entrained. Fat embolism can occur during orthopedic procedures; amniotic fluid embolism is a rare, unpredictable, and often fatal, complication of obstetrical delivery. Thromboembolism may occur intraoperatively dur-ing prolonged procedures. The clot may have been present prior to surgery or may form intraoperatively; surgical manipulations or a change in the patient’s position may then dislodge the venous thrombus. Manipulation of tumors with intravascular extension can similarly produce pulmonary embolism.

Intraoperative pulmonary embolism usu-ally presents as sudden cardiovascular collapse, hypoxemia, or bronchospasm. A decrease in end-tidal CO2 concentration is also suggestive of pulmonary embolism, but is not specific. Invasive monitoring may reveal elevated central venous and pulmonary arterial pressures. Depending on the type and location of an embolism, a transesopha-geal echocardiogram may be helpful. TEE may not reveal the embolus but will often demonstrate right heart distention and dysfunction. If air is identified in the right atrium, or if it is suspected, emergent central vein cannulation and aspiration of the air may be lifesaving. For all other emboli, treatment is supportive, with intravenous fluids and inotropes. Placement of a vena cava filter should be considered postoperatively.