Certain risk factors (Table 24–1) may predispose patients to postoperative pulmonary complica-tions. The incidence of atelectasis, pneumonia,pulmonary embolism, and respiratory failure fol-lowing surgery is quite high, but varies widely (from 6% to 60%), depending on the patient population studied and the surgical procedures performed. The two strongest predictors of complications seem to be operative site and a history of dyspnea, which correlate with the degree of preexisting pulmonary disease. 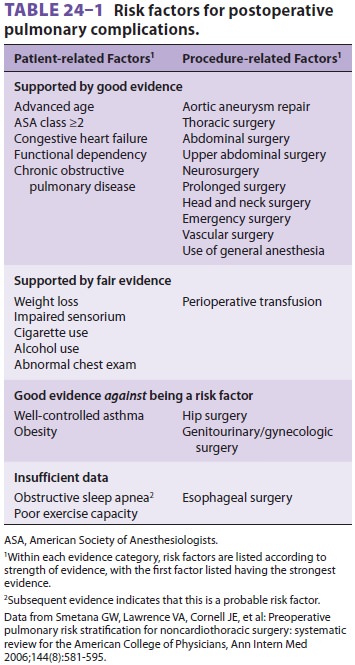 The association between smoking and respi-ratory disease is well established; abnormalities in maximal midexpiratory flow (MMEF) rates are often demonstrable well before symptoms of COPD appear. Although abnormalities can be demon-strated on pulmonary function tests (PFTs), because most patients who smoke do not have PFTs per-formed preoperatively, it is best to assume that such patients have some degree of pulmonary compro-mise. Even in normal individuals, advancing age is associated with an increasing prevalence of pul-monary disease and an increase in closing capac-ity. Obesity decreases functional residual capacity (FRC), increases the work of breathing, and predis-poses patients to deep venous thrombosis.

Thoracic and upper abdominal surgical proce-dures can have marked effects on pulmonary func-tion. Operations near the diaphragm often result in diaphragmatic dysfunction and a restrictive ventilatory defect . Upper abdominal procedures consistently decrease FRC (60% to 70%); the effect is maximal on the first postoperative day and usually lasts 7–10 days. Rapid shallow breathing with an ineffective cough caused by pain (splinting), a decrease in the number of sighs, and impaired mucociliary clearance lead to microatelectasis and loss of lung volume. Intrapulmonary shunting pro-motes hypoxemia. Residual anesthetic effects, the recumbent position, sedation from opioids, abdomi-nal distention, and restrictive dressings may also be contributory. Complete relief of pain with regional 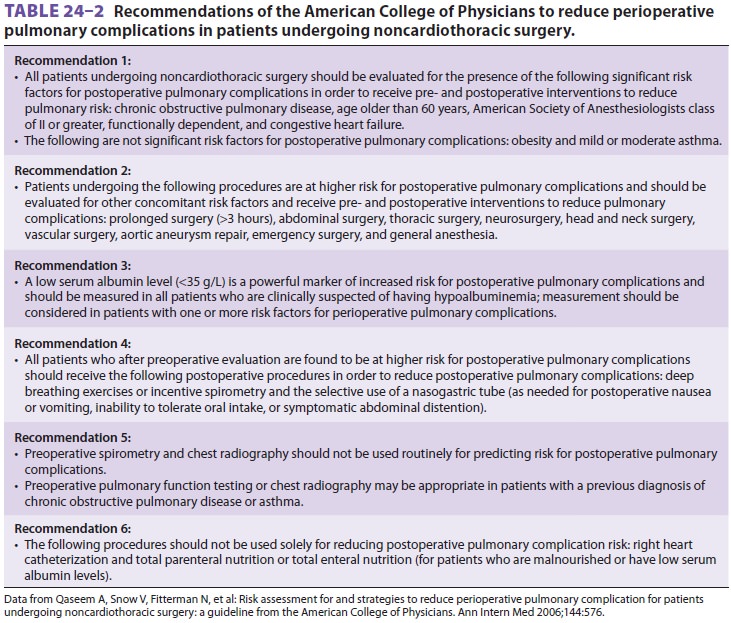 anesthesia can decrease, but does not completely reverse these abnormalities. Persistent microatelec-tasis and retention of secretions favor the develop-ment of postoperative pneumonia.

Although many adverse effects of general anes-thesia on pulmonary function have been described, the superiority of regional over general anesthesia in patients with pulmonary impairment is not firmly established.

Because of the prevalence of smoking and obe-sity, many patients may be at increased risk of devel-oping postoperative pulmonary dysfunction. The risk of complications increases if the patient is hav-ing a thoracotomy or laparotomy, even if the patient has no risk factors. Patients with known disease should have their pulmonary function optimized preoperatively, with careful consideration given to the choice of general versus regional anesthesia.

The American College of Physicians has estab-lished guidelines to assist in the preoperative assess-ment of patients with pulmonary disease (see Table 24–2).

When patients with a history of dyspnea present without the benefit of a previous workup, the differ-ential diagnosis can be quite broad and may include both primary pulmonary and cardiac pathologies. Diagnostic approaches to evaluating such patients are summarized in Figure24–1. 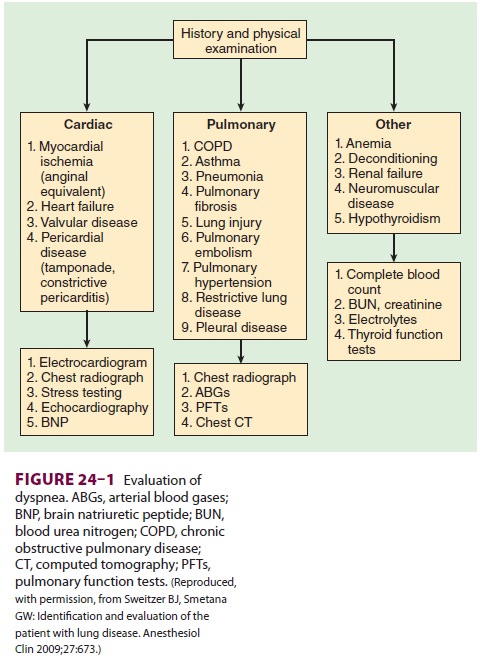 Obstructive and restrictive breathing are the two most common abnormal patterns, as determined by PFTs. Obstructive lung diseases are the most com-mon form of pulmonary dysfunction. They include asthma, emphysema, chronic bronchitis, cystic fibrosis, bronchiectasis, and bronchiolitis. The pri-mary characteristic of these disorders is resistance to airflow. An MMEF of <70% (forced expiratory flow [FEF25–75%]) is often the only abnormality early in the course of these disorders. Values for FEF25–75% in adult males and females are normally >2.0 and >1.6 L/sec, respectively. As the disease progresses, both forced expiratory volume in 1 sec (FEV1) and the FEV1/FVC (forced vital capacity) ratio are less than 70% of the predicted values.

Elevated airway resistance and air trap-ping increase the work of breathing; respiratory gas exchange· is· impaired because of ventilation/ perfusion (V/Q) imbalance. The predominance of expiratory airflow resistance results in air trap-ping; residual volume and total lung capacity (TLC) increase. Wheezing is a common finding and repre-sents turbulent airflow. It is often absent with mild obstruction that may be manifested initially only by prolonged exhalation. Progressive obstruction typi-cally results first in expiratory wheezing only, and then in both inspiratory and expiratory wheezing. With marked obstruction, wheezing may be absent when airflow has nearly ceased.