COPD is the most common pulmonary disorder encountered in anesthetic practice, and its preva-lence increases with age.

COPD is the most common pulmonary disorder encountered in anesthetic practice, and its preva-lence increases with age. The disorder is strongly associated with cigarette smoking and has a male predominance. COPD is currently defined as a disease state characterized by airflow limitation that is not fully reversible. The chronic airflow limitation of this disease is due to a mixture of small and large airway disease (chronic bronchitis/bron-chiolitis) and parenchymal destruction (emphy-sema), with representation of these two components varying from patient to patient.Most patients with COPD are asymptomatic or only mildly symptomatic, but show expiratory air-flow obstruction upon PFTs. In many patients, the obstruction has an element of reversibility, presum-ably from bronchospasm (as shown by improvement in response to administration of a bronchodilator). With advancing disease, maldistribution of both ventilation and· pulmonary· blood flow results in areas of low (V/Q) ratios· (intrapulmonary· shunt), as well as areas of high (V/Q) ratios (dead space).

The clinical diagnosis of chronic bronchitis is defined by the presence of a productive cough on most days of 3 consecutive months for at least 2 consecutive years. In addition to cigarette smok-ing, air pollutants, occupational exposure to dusts, recurrent pulmonary infections, and familial fac-tors may be responsible. Secretions from hyper-trophied bronchial mucous glands and mucosal edema from inflammation of the airways produce airflow obstruction. The term “chronic asthmatic 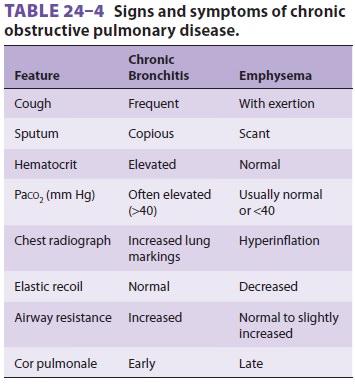 bronchitis” may be used when bronchospasm is a major feature. Recurrent pulmonary infections (viral and bacterial) are common and often associ-ated with bronchospasm. RV is increased, but TLC is often normal. Intrapulmonary shunting is promi-nent, and hypoxemia is common.

In patients with COPD, chronic hypoxemia leads to erythrocytosis, pulmonary hypertension, and eventually right ventricular failure (cor pulmo-nale); this combination of findings is often referred to as the blue bloater syndrome, but <5% of patients with COPD fit this description (Table24–4). In the course of disease progression, patients gradually develop chronic CO2 retention; the normal venti-latory drive becomes less sensitive to arterial CO2 tension and may be depressed by oxygen adminis-tration (below).

Emphysema is a pathological disorder character-ized by irreversible enlargement of the airways distal to terminal bronchioles and destruction of alveo-lar septa. The diagnosis can be reliably made with computed tomography (CT) of the chest. Mild api-cal emphysematous changes are a normal, but clini-cally insignificant, consequence of aging. Significant emphysema is more frequently related to cigarette smoking. Less commonly, emphysema occurs at an early age and is associated with a homozygous deficiency of α1-antitrypsin. This is a protease inhibitor that prevents excessive activity of proteo-lytic enzymes (mainly elastase) in the lungs; these enzymes are produced by pulmonary neutrophils and macrophages in response to infection and pol-lutants. Emphysema associated with smoking may similarly be due to a relative imbalance between protease and antiprotease activities in susceptible individuals.

Emphysema may exist in a centrilobular or panlobular form. The centrilobular (or centriaci-nar) form results from dilatation or destruction of the respiratory bronchioles, is more closely associ-ated with tobacco smoking, and has predominantly an upper lobe distribution. The panlobular (or pan-acinar) form results in a more even dilatation and destruction of the entire acinus, is associated with α1-antitrypsin deficiency, and has predominantly alower lobe distribution.

Loss of the elastic recoil that normally supports small airways by radial traction allows premature collapse during exhalation, leading to expiratory flow limitation with air trapping and hyperinfla-tion. Patients characteristically have increases in RV, FRC, TLC, and the RV/TLC ratio. The FRC is shifted rightward along the compliance curve of the lungs, toward the flat portion of the curve, in detriment of the pulmonary mechanics.

Disruption of the alveolar–capillary structure and loss of the acinar structure leads to decreased diffusion lung capacity (DLCO), V/Q mismatch, and impairment of gas exchange. Also, normal parenchyma may become compressed by the hyperinflated portions ·of· the lung, resulting in a further increase in the V/Q mismatch. Due to the higher diffusibility of CO2its elimination is well preserveduntilV/Qabnormalities become severe. ChronicCO2 retention occurs slowly and generally results in a compensated respiratory acidosis on blood gas analysis. Arterial oxygen tension is usually normal or slightly reduced. Acute CO2 retention is a sign of impending respiratory failure.

When dyspneic, patients with emphysema often purse their lips to delay closure of the small airways, which accounts for the term “pink puffers” that is often used (Table 24–4). However, as mentioned above, most patients diagnosed with COPD have a combination of bronchitis and emphysema.

TreatmentforCOPDisprimarilysupportive.Cessation of smoking is the long-term inter-vention that has been shown to reduce the rateof decline in lung function. Patients demonstrating a reversible element in airway obstruction (>15% improvement in FEV1 following administration of a bronchodilator) should be started on long-term bronchodilator therapy. Inhaled β2-adrenergic ago-nists, glucocorticoids, and ipratropium are very use-ful; ipratropium may play a more important role in the management of these patients than in patients with asthma. Even patients who do not show improvement in their PFTs from the use of broncho-dilators may improve clinically with bronchodilator therapy. Treatment with systemic corticosteroids may be required in patients with acute exacerbations of COPD. However, systemic corticosteroids in patients with stable COPD is discouraged due to the lack of added benefit and the potential for systemic side effects. COPD exacerbations may be related to bouts of bronchitis, heralded by a change in sputum; frequent treatment with broad-spectrum antibiotics may be necessary. Hypoxemia should be treated carefully with supplemental oxygen. Patients with chronic hypoxemia (Pao2<55 mm Hg) and pulmo-nary hypertension require low-flow oxygen therapy (1–2 L/min). Oxygen treatment during acute COPD exacerbations to a Pao2 above 60 mm Hg may lead toCO retention, most likely due to an inhibition of the hypoxic vasoconstriction in areas with low V/Q andthe Haldane effect.

When cor pulmonale is present, diuretics are used to control peripheral edema; beneficial effects from vasodilators are inconsistent. Pulmonary reha-bilitation may improve the functional status of the patient by improving physical symptoms and exer-cise capacity. Some studies suggest that the ability to increase oxygen consumption during exercise is inversely related to postoperative complications.

Patients with COPD should be prepared prior to elective surgical procedures in the same way as patients with asthma (above). They should be ques-tioned about recent changes in dyspnea, sputum, and wheezing. Patients with an FEV 1 less than 50% of predicted (1.2–1.5 L) usually have dyspnea on exertion, whereas those with an FEV 1 less than 25% (<1 L in men) typically have dyspnea with minimal activity. The latter finding, in patients with predomi-nantly chronic bronchitis, is also often associated with CO2 retention and pulmonary hypertension. PFTs, chest radiographs, and arterial blood gas mea-surements, if available, should be reviewed carefully. The presence of bullous changes on the radiograph should be noted. Many patients have concomitant cardiac disease and should also receive a careful car-diovascular evaluation.

In contrast to asthma, only limited improve-ment in respiratory function may be seen after a short period of intensive preoperative preparation.Nonetheless, preoperative interventions in patients with COPD aimed at correctinghypoxemia, relieving bronchospasm, mobilizing and reducing secretions, and treating infections may decrease the incidence of postoperative pulmonary complications. Patients at greatest risk of complica-tions are those with preoperative pulmonary func-tion measurements less than 50% of predicted. The possibility that postoperative ventilation may be necessary in high-risk patients should be discussed with both the patient and the surgeon.

Smoking should be discontinued for at least 6–8 weeks before the operation to decrease secre-tions and to reduce pulmonary complications.Cigarette smoking increases mucus production and decreases clearance. Both gaseous and particulate phases of cigarette smoke can deplete glutathione and vitamin C and may promote oxidative injury to tissues. Cessation of smoking for as little as 24 hr has theoretical beneficial effects on the oxygen-carrying capacity of hemoglobin; acute inhalation of cigarette smoke releases carbon monoxide, which increases carboxyhemoglobin levels, as well as nitric oxide, and nitrogen dioxide, which can lead to formation of methemoglobin.

Long-acting bronchodilators and mucolytics should be continued, including on the day of surgery. COPD exacerbations should be treated aggressively.

Although regional anesthesia is often considered preferable to general anesthesia, high spinal or epi-dural anesthesia can decrease lung volumes, restrict the use of accessory respiratory muscles, and pro-duce an ineffective cough, leading to dyspnea and retention of secretions. Loss of proprioception from the chest and positions such as lithotomy or lateral decubitus may accentuate dyspnea in awake patients.

Preoxygenation prior to induction of general anesthesia prevents the rapid oxygen desaturation often seen in these patients. The selection of anes-thetic agents and general intraoperative manage-ment must be tailored to the specific needs and goals of every patient. Unfortunately, the use of broncho-dilating anesthetics improves only the reversible component of airflow obstruction; significant expi-ratory obstruction may still present, even under deep anesthesia. Expiratory airflow limitation, espe-cially under positive pressure ventilation, may lead to air trapping, dynamic hyperinflation, and elevated intrinsic positive end-expiratory pressure (iPEEP). Dynamic hyperinflation may result in volutrauma to the lungs, hemodynamic instability, hypercap-nia, and acidosis. Interventions to mitigate air trap-ping include: (1) allowing more time to exhale by decreasing both the respiratory rate and I:E ratio;allowing permissive hypercapnia; (3) applying low levels of extrinsic PEEP; and (4) aggressively treating bronchospasm.

Intraoperative causes of hypotension include pneumothorax, and right heart failure due to hypercapnia and acidosis. A pneumothorax may manifest as hypoxemia, increased peak airway pressures, decreasing tidal volumes, and abrupt cardiovascular collapse unresponsive to fluid and vasopressor administration.

Nitrous oxide should be avoided in patients with bullae and pulmonary hypertension. Inhibition of hypoxic pulmonary vasoconstriction by inhala-tion anesthetics is usually not clinically significant at the usual doses. However, due to increased dead space, patients with severe COPD have unpredict-able uptake and distribution of inhalational agents, and the end-tidal volatile anesthetic concentration is inaccurate.

Measurement of arterial blood gases is desir-able for extensive intraabdominal and thoracic procedures. Although pulse oximetry accurately detects significant arterial desaturation, direct measurement of arterial oxygen tensions may be necessary to detect more subtle changes in intrapul-monary shunting. Moreover, arterial CO 2 measure-ments should be used to guide ventilation because increased dead space widens the normal arterial-to-end-tidal CO2 gradient. Moderate hypercapnia with a Paco2 of up to 70 mm Hg may be well tolerated in the short term, assuming a reasonable cardiovas-cular reserve. Hemodynamic support with inotro-pic agents may be required in more compromised patients. Hemodynamic monitoring should be dic-tated by any underlying cardiac dysfunction, as well as the extent of the surgery. In patients with pulmo-nary hypertension, measurements of central venous pressure reflect right ventricular function rather than intravascular volume.

At the end of surgery, the timing of extubation should balance the risk of bronchospasm with that of respiratory failure, but evidence suggests that early extubation (in the operating room) is beneficial. Successful extubation at the end of the procedure depends on multiple factors: adequate pain control, reversal of neuromuscular blockade, absence of sig-nificant bronchospasm and secretions, absence of significant hypercapnia and acidosis, and absence of respiratory depression due to residual anesthetic agents. Patients with an FEV 1 below 50% may require a period of postoperative ventilation, particularly following upper abdominal and thoracic operations.