Asthma is a common disorder, affecting 5% to 7% of the population. Its primary characteristic is airway (bronchiolar) inflammation and hyperreactivity in response to a variety of stimuli.

Asthma is a common disorder, affecting 5% to 7% of the population. Its primary characteristic is airway (bronchiolar) inflammation and hyperreactivity in response to a variety of stimuli. Clinically, asthma is manifested by episodic attacks of dyspnea, cough, and wheezing. Airway obstruction, which is gener-ally reversible, is the result of bronchial smooth mus-cle constriction, edema, and increased secretions.Classically, the obstruction is precipitated by a vari-ety of airborne substances, including pollens, animal dander, dusts, pollutants, and various chemicals. Some patients also develop bronchospasm follow-ing ingestion of aspirin, nonsteroidal antiinflam-matory agents, sulfites, or tartrazine and other dyes. Exercise, emotional excitement, and viral infections also precipitate bronchospasm in many patients. Asthma is classified as acute or chronic. Chronic asthma is further classified as intermittent (mild) and mild, moderate, and severe persistent disease.

The terms extrinsic (allergic) asthma (attacks related to environmental exposures) and intrinsic (idiosyncratic) asthma (attacks usually occurring without provocation) were used in the past, but these classifications were imperfect; many patients show features of both forms. Moreover, overlap with chronic bronchitis  is common.

The pathophysiology of asthma involves the local release of various chemical mediators in the airway, and, possibly, overactivity of the parasympathetic nervous system. Inhaled substances can initiate bronchospasm through both specific and nonspecific immune mechanisms by degranulating bronchial mast cells. In classic allergic asthma, antigen binding to immunoglobulin E (IgE) on the surface of mast cells causes degranulation. Bronchoconstriction is the result of the subsequent release of histamine; bra-dykinin; leukotrienes C, D, and E; platelet-activating factor; prostaglandins (PG) PGE2, PGF2α, and PGD2; and neutrophil and eosinophil chemotactic factors. The parasympathetic nervous system plays a major role in maintaining normal bronchial tone; a normal diurnal variation in tone is recognized in most individuals, with peak airway resistance occur-ring early in the morning (at about 6:00 am). Vagal afferents in the bronchi are sensitive to histamine and multiple noxious stimuli, including cold air, inhaled irritants, and instrumentation (eg, tra-cheal intubation). Reflex vagal activation resultsin bronchoconstriction, which is mediated by an increase in intracellular cyclic guanosine mono-phosphate (cGMP). During an asthma attack, bronchoconstriction, mucosal edema, and secretions increase resistance to gas flow at all levels of the lower airways. As an attack resolves, airway resistance normalizes first in the larger airways (main-stem, lobar, segmental, and subsegmental bronchi), and then in more peripheral airways. Consequently, expiratory flow rates are initially decreased throughout an entire forced exhalation, but during resolution of the attack, the expiratory flow rate is reduced only at low lung volumes. TLC, residual volume (RV), and FRC are all increased. In acutely ill patients, RV and FRC are often increased by more than 400% and 100%, respectively. Prolonged or severe attacks markedly increase the work of breathing and can fatigue respiratory· muscles·. The number of alveolar units with low (V/Q) ratios increases, resulting in hypoxemia. Tachypnea is likely due to stimulation of bronchial receptors and typically produces hypocapnia. A normal or high Paco2 indicates that the patient can no longer maintain the work ofbreathing and is often a sign of impending respira-tory failure. A pulsus paradoxus and electrocardio-graphic signs of right ventricular strain (ST-segment changes, right axis deviation, and right bundle branch block) are also indicative of severe airway obstruction.

Drugs used to treat asthma include β-adrenergic agonists, methylxanthines, glucocorticoids, anti-cholinergics, leukotriene blockers, and mast cell-stabilizing agents; with the exception of the last, these drugs may be used for either acute or chronic treatment of asthma. Although devoid of any bron-chodilating properties, cromolyn sodium and nedo-cromil are effective in preventing bronchospasm by blocking the degranulation of mast cells.Sympathomimetic agents ( Table24–3) are the most commonly used for acute exacerbations. They produce bronchodilation via β2-agonist activ-ity. Activation of β2-adrenergic receptors on bron-chiolar smooth muscle stimulates the activity of adenylate cyclase, which results in the formation of intracellular cyclic adenosine monophosphate (cAMP). These agents are usually administered via a metered-dose inhaler or by aerosol. Use of more selective β2-agonists, such as terbutaline or alb-uterol, may decrease the incidence of undesirable β1 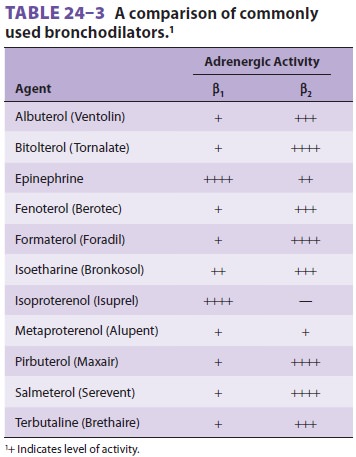 cardiac effects, but are often not particularly selec-tive in high doses.

Traditionally, methylxanthines are thought to produce bronchodilation by inhibiting phosphodi-esterase, the enzyme responsible for the breakdown of cAMP. Their pulmonary effects seem much more complex and include catecholamine release, block-ade of histamine release, and diaphragmatic stimu-lation. Oral long-acting theophylline preparations are used for patients with nocturnal symptoms. Unfortunately, theophylline has a narrow therapeu-tic range; therapeutic blood levels are considered to be 10–20 mcg/mL. Lower levels, however, may be effective. Aminophylline is the only available intra-venous theophylline preparation.

Glucocorticoids are used for both acute treat-ment and maintenance therapy of patients with asthma because of their antiinflammatory and membrane-stabilizing effects. Beclomethasone, tri-amcinolone, fluticasone, and budesonide are syn-thetic steroids commonly used in metered-dose inhalers for maintenance therapy. Although they are associated with a low incidence of undesirable systemic eff ects, their use does not necessarily prevent adrenal suppression. Intravenous hydrocortisone or methylprednisolone is used acutely for severe attacks, followed by tapering doses of oral prednisone. Glucocorticoids usually require several hours to become eff ective.

Anticholinergic agents produce bronchodilation through their antimuscarinic action and may block refl ex bronchoconstriction. Ipratropium, a congener of atropine that can be given by a metereddose inhaler or aerosol, is a moderately eff ective bronchodilator without appreciable systemic anticholinergic effects.

The emphasis in evaluating patients with asthma should be on determining the recent course of the disease and whether the patient has ever been hospi-talized for an acute asthma attack, as well as on ascertaining that the patient is in optimal condition. Patients with poorly controlled asthma or wheezing at the time of anesthesia induction have a higher risk of perioperative complications. Conversely, well-controlled asthma has not been shown to be a risk factor for intraoperative or postoperative complica-tions. A thorough history and physical examination are of critical importance. The patient should have no or minimal dyspnea, wheezing, or cough. Com-plete resolution of recent exacerbations should be confirmed by chest auscultation. Patients with fre-quent or chronic bronchospasm should be placed on an optimal bronchodilating regimen. A chest radio-graph identifies air trapping; hyperinflation results in a flattened diaphragm, a small-appearing heart, and hyperlucent lung fields. PFTs—particularly expiratory airflow measurements such as FEV1,

FEV1/FVC, FEF25-75%, and peak expiratory flow rate—help in assessing the severity of airwayobstruction and reversibility after bronchodilator treatment. Comparisons with previous measure-ments are invaluable.Asthmatic patients with active bronchospasm presenting for emergency surgery should betreated aggressively. Supplemental oxygen, aerosol-ized β2-agonists, and intravenous glucocorticoids can dramatically improve lung function in a few hours. Arterial blood gases may be useful in man-aging severe cases. Hypoxemia and hypercapnia are typical of moderate and severe disease; even slight hypercapnia is indicative of severe air trapping and may be a sign of impending respiratory failure.Some degree of preoperative sedation may be desirable in asthmatic patients presenting for elec-tive surgery—particularly in patients whose disease has an emotional component. In general, benzodiaz-epines are the most satisfactory agents for premedi-cation. Anticholinergic agents are not customarily given unless very copious secretions are present or if ketamine is to be used for induction of anesthesia. In typical intramuscular doses, anticholinergics are not effective in preventing reflex bronchospasm fol-lowing intubation. The use of an H2-blocking agent (such as cimetidine, ranitidine, or famotidine) is the-oretically detrimental, since H2-receptor activation normally produces bronchodilation; in the event of histamine release, unopposed H1 activation with H2 blockade may accentuate bronchoconstriction.Bronchodilators should be continued up to the time of surgery; in order of effectiveness, they are β-agonists, inhaled glucocorticoids, leukotri-ene blockers, mast-cell stabilizers, theophyllines, and anticholinergics. Patients who receive chronic glucocorticoid therapy with more than 5 mg/day of prednisone (or its equivalent) should receive a graduated supplementation schedule based on the severity of the illness and complexity of the surgical procedure. Supplemental doses should be tapered to baseline within 1–2 days.

The most critical time for asthmatic patients under-going anesthesia is during instrumentation of the airway. General anesthesia by mask or regional anesthesia will circumvent this problem, but nei-ther eliminates the possibility of bronchospasm. In fact, some clinicians believe that high spinal or epi-dural anesthesia may aggravate bronchoconstriction by blocking sympathetic tone to the lower airways (T1–T4) and allowing unopposed parasympathetic activity. Pain, emotional stress, or stimulation dur-ing light general anesthesia can precipitate bron-chospasm. Drugs often associated with histamine release (eg, atracurium, morphine, and meperidine) should be avoided or given very slowly when used. The goal of any general anesthetic is a smooth induc-tion and emergence, with anesthetic depth adjusted to stimulation.

The choice of induction agent is less important, if adequate depth of anesthesia is achieved before intubation or surgical stimulation. Thiopental may occasionally induce bronchospasm as a result of exaggerated histamine release. Propofol and etomi-date are suitable induction agents; propofol may also produce bronchodilation. Ketamine has bron-chodilating properties and is a good choice for patients with asthma who are also hemodynamically unstable. Ketamine should probably not be used in patients with high theophylline levels, as the com-bined actions of the two drugs can precipitate seizure activity. Halothane and sevoflurane usually provide the smoothest inhalation induction with bronchodi-lation in asthmatic children. Isoflurane and desflu-rane can provide equal bronchodilation, but are not normally used for inhalation induction. Desflurane is the most pungent of the volatile agents and may result in cough, laryngospasm, and bronchospasm.

Reflex bronchospasm can be blunted before intubation by an additional dose of the induction agent, ventilating the patient with a 2–3 minimum alveolar concentration (MAC) of a volatile agent for 5 min, or administering intravenous or intra-tracheal lidocaine (1–2 mg/kg). Note that intra-tracheal lidocaine itself can initiate bronchospasm if an inadequate dose of induction agent has been used. Administration of an anticholinergic agent may block reflex bronchospasm, but causes exces-sive tachycardia. Although succinylcholine may on occasion induce marked histamine release, it can generally be safely used in most asthmatic patients. In the absence of capnography, confirmation of cor-rect tracheal placement by chest auscultation can be difficult in the presence of marked bronchospasm.

Volatile anesthetics are most often used for maintenance of anesthesia to take advantage of their potent bronchodilating properties. Ventilation should incorporate warmed humidified gases whenever possible. Airflow obstruction during expiration is apparent on capnography as a delayed rise of the end-tidal CO 2 value ( Figure24–2); the 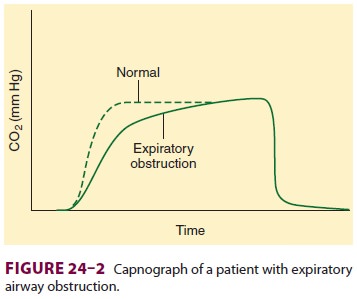 severity of obstruction is generally inversely related to the rate of rise in end-tidal CO 2. Severe broncho-spasm is manifested by rising peak inspiratory pres-sures and incomplete exhalation. Tidal volumes of 6–8 mL/kg, with prolongation of the expiratory time, may allow more uniform distribution of gas flow to both lungs and may help avoid air trapping. The Paco2 may increase, which is acceptable if there is no contraindication from a cardiovascular or neurologic perspective.Intraoperative bronchospasm is usually mani-fested as wheezing, increasing peak airwaypressures (plateau pressure may remain unchanged), decreasing exhaled tidal volumes, or a slowly risingwaveform on the capnograph. Other causes can simulate bronchospasm: obstruction of

the tracheal tube from kinking, secretions, or an overinflated balloon; bronchial intubation; active expiratory efforts (straining); pulmonary edema or embolism; and pneumothorax. Bronchospasm should be treated by increasing the concentration of the volatile agent and administering an aerosolized bronchodilator. Infusion of low dose epinephrine may be needed if bronchospasm is refractory to other interventions.Intravenous hydrocortisone can be given, par-ticularly in patients with a history of glucocorticoid therapy.

At the completion of surgery, the patient should ideally be free of wheezing. Reversal of nondepolarizing neuromuscular blocking agents with anticholinesterase agents does not precipitate bronchoconstriction, if preceded by the appropri-ate dose of an anticholinergic agent. Deep extu-bation (before airway reflexes return) reduces bronchospasm on emergence. Lidocaine as a bolus (1.5–2 mg/kg) may help obtund airway reflexes dur-ing emergence.