Anatomy of the Upper and Lower Urinary Tracts 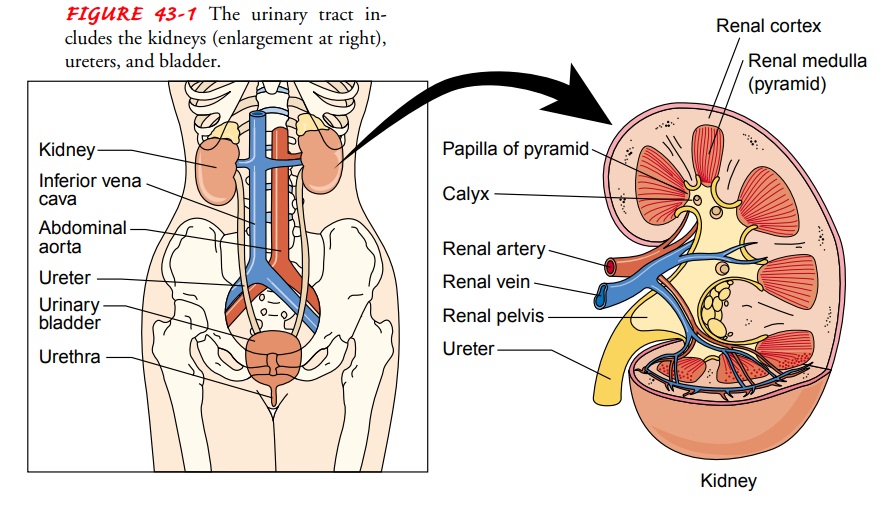 The urinary system—the structures of which precisely maintain the internal chemical environment of the body—perform various excretory, regulatory, and secretory functions.

ANATOMY OF THE UPPER AND LOWER URINARY TRACTS

The urinary system—the structures of which precisely maintain the internal chemical environment of the body—perform various excretory, regulatory, and secretory functions.

The kidneys are a pair of brownish-red structures located retroperitoneally (behind and outside the peritoneal cavity) on the posterior wall of the abdomen from the 12th thoracic vertebra to the 3rd lumbar vertebra in the adult (Fig. 43-1). An adult kidney weighs 120 to 170 g (about 4.5 oz) and is 12 cm (about 4.5 inches) long, 6 cm wide, and 2.5 cm thick. The kidneys are well protected by the ribs, muscles, Gerota’s fascia, perirenal fat, and the renal capsule, which surround each kidney. 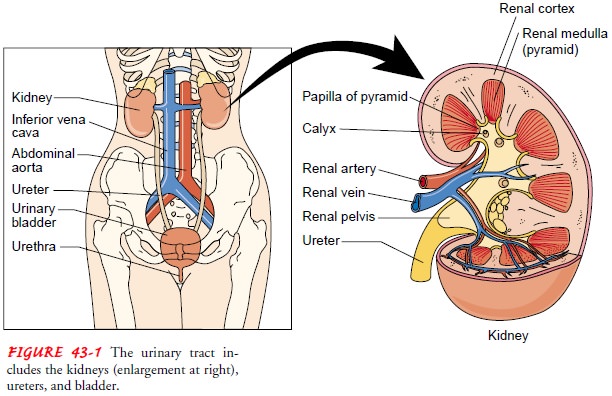 The kidney consists of two distinct regions, the renal parenchyma and the renal pelvis. The renal parenchyma is divided into the cortex and the medulla. The cortex contains the glomeruli,proximal and distal tubules, and cortical collecting ducts and their adjacent peritubular capillaries. The medulla resembles conical pyramids. The pyramids are situated with the base facing the concave surface of the kidney and the apex facing the hilum, or

pelvis. Each kidney contains approximately 8 to 18 pyramids.The pyramids drain into 4 to 13 minor calices that, in turn, drain into 2 to 3 major calices that open directly into the renal pelvis.

The hilum, or pelvis, is the concave portion of the kidneythrough which the renal artery enters and the renal vein exits. The renal artery (arising from the abdominal aorta) divides into smaller and smaller vessels, eventually forming the afferent arteriole. The afferent arteriole branches to form the glomerulus, which is the capillary bed responsible for glomerular filtration. Blood leaves the glomerulus through the efferent arteriole and flows back to the inferior vena cava through a network of capillaries and veins.Each kidney contains about 1 million nephrons, the functional units of the kidney.

Each kidney is capable of providing adequate renal function if the opposite kidney becomes nonfunctional. The nephron consists of a glomerulus containing afferent and efferent arterioles, Bowman’s capsule, proximal tubule, loop of Henle, distal tubule, and collecting ducts (Fig. 43-2). Collecting ducts converge into papillae, which empty into the minor calices, which drain into three major calices that open directly into the renal pelvis. 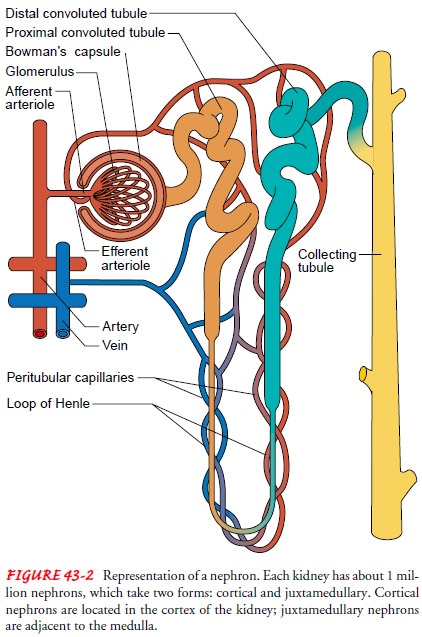 The glomerulus is composed of three filtering layers: the capillary endothelium, the basement membrane, and the epithelium.The glomerular membrane normally allows filtration of fluid and small molecules yet limits passage of larger molecules, such as blood cells and albumin. Kidney function begins to decrease at a rate of approximately 1% each year beginning at approximately age 30.

Urine, which is formed within the nephrons, flows into the ureter, a long fibromuscular tube that connects each kidney to the bladder. The ureters are narrow, muscular tubes, each 24 to 30 cm long, that originate at the lower portion of the renal pelvis and terminate in the trigone of the bladder wall. There are three narrowed areas of each ureter: the ureteropelvic junction, the ureteral segment near the sacroiliac junction, and the ureterovesical junction.

The angling of the ureterovesical junction is the primary means of providing antegrade, or downward, movement of urine, also re-ferred to as efflux of urine. This angling prevents vesicoureteral reflux, which is the retrograde, or backward, movement of urinefrom the bladder, up the ureter, toward the kidney. During void-ing (micturition), increased intravesical pressure keeps the uretero-vesical junction closed and keeps urine within the ureters. As soon as micturition is completed, intravesical pressure returns to its nor-mal low baseline value, allowing efflux of urine to resume. There-fore, the only time that the bladder is completely empty is in the last seconds of micturition before efflux of urine resumes.

The three areas of narrowing within the ureters have a propen-sity toward obstruction because of renal calculi (kidney stones) or stricture. Obstruction of the ureteropelvic junction is the most serious because of its close proximity to the kidney and the risk of associated kidney dysfunction. The left ureter is slightly shorter than the right. The lining of the ureters is made up of transitional cell epithelium called urothelium. As in the bladder, the urothe-lium prevents reabsorption of urine. The movement of urine from the renal pelves through the ureters into the bladder is fa-cilitated by peristaltic waves (occurring about one to five times per minute) from contraction of the smooth muscle in the ureter wall (Walsh, Retik, Vaughan & Wein, 1998).

The urinary bladder is a muscular, hollow sac located just be-hind the pubic bone. Adult bladder capacity is about 300 to 600 mL of urine. In infancy, the bladder is found within the ab-domen. In adolescence and through adulthood, the bladder as-sumes its position in the true pelvis. The bladder is characterized by its central, hollow area called the vesicle, which has two inlets (the ureters) and one outlet (the urethrovesical junction), which is surrounded by the bladder neck. The wall of the bladder com-prises four layers. The outermost layer is the adventitia, which is made up of connective tissue. Immediately beneath the adventi-tia is a smooth muscle layer known as the detrusor. Beneath the detrusor is a smooth muscle tunic known as the lamina propria, which serves as an interface between the detrusor and the inner-most layer, the urothelium. The urothelium layer is specialized, transitional cell epithelium, containing a membrane that is im-permeable to water. The urothelium prevents the reabsorption of urine stored in the bladder. The bladder neck contains bundles of involuntary smooth muscle that form a portion of the urethral sphincter known as the internal sphincter. The portion of the sphincteric mechanism that is under voluntary control is the ex-ternal urinary sphincter at the anterior urethra, the segment most distal from the bladder (Walsh et al., 1998).

The urethra arises from the base of the bladder: In the male, it passes through the penis; in the female, it opens just anterior to the vagina. In the male, the prostate gland, which lies just below the bladder neck, surrounds the urethra posteriorly and laterally.