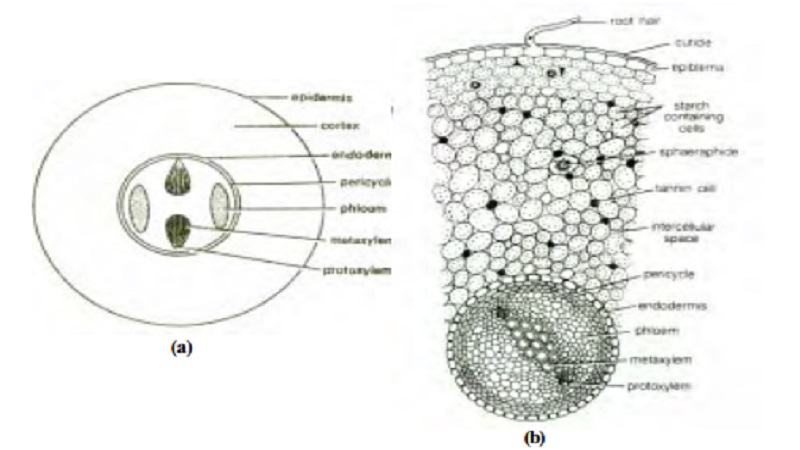 Epiblema: It is composed of a single layer of thin-walled cells. 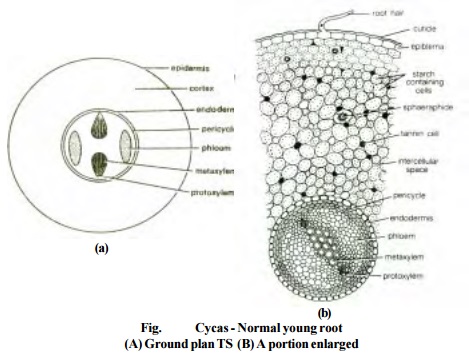 Vascular tissue: This tissue forms a central diarch stele. The diarch steel refers to the presence of two patches of protoxylem points. The xylem consists of xylem tracheids. A tracheid is one celled, non-living, elongated xylem element with thick lignified and pitted cell walls. The xylem is exarch i.e., the protoxylem is pointing towards the periphery while the metaxylem is located near the centre of roots. The pith is either reduced or completely absent.

The normal roots exhibit secondary growth, which starts by the formation of cambium strips that are formed inner to the primary phloem strands (fig). These cambium strips cut off secondary phloem towards the outer side and secondary xylem towards the inner side. Due to the development of secondary structures the primary phloem is crushed while the primary xylem is found in the centre. A distinct layer of cork cambium (phellogen) arisis in the outer region of cortex which gives rise to cork (phellem) on its outer side and secondary cortex (phelloderm) on its inner side. Cork, cork cambium and cork cortex or secondary cortex are collectively known as periderm.

Coralloid roots: The internal structure of coralloid roots is similar to that of normal roots except in certain respects. The cortex of coralloid root is differentiated into i) outer cortex composed of polygonal cells, ii) inner cortex consisted of thin-walled parenchymatous cells and iii) middle cortex made up of a single layer of loosely connected thin-walled and radially elongated cells with blue green algal forms such as Anabaena or Nostoc. Coralloid roots show little or no secondary growth. 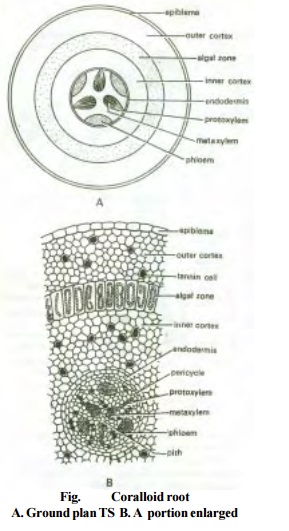 Stem : The stem is irregular in outline due to the presence of numerous persistent leaf bases. Its internal structure is similar to that of dicots of Angiosperms. Young stem of cycas is differentiated into epidermis, cortex and vascular cylinder (fig). The epidermis

is the outermost layer of stem covered with a thick cuticle. Cortex forms the major part of the stem. It is composed of parenchymatous cells with rich starch grains. The cortex is traversed by several mucilagenous canals and many leaf traces. The inner most layer of cortex is endodermis which is followed by pericycle. However, these two regions are not distinctly seen.

There is a parenchymatous pith present in the centre of the stem. The pith cells are rich in starch and some cells contain tannin and mucilagenous substances. 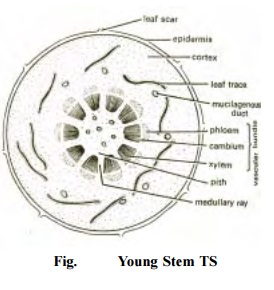 Rachis : Transverse section of rachis is more or less circular in outline. It has two rows of leaflets inserted on one side. The internal structure is differentiated into epidermis, hypodermis, ground tissue and vascular tissue (fig).

The vascular bundles are arranged in an inverted omega-shaped manner. The bundles are conjoint, collateral, open and diploxylic. Diploxylic condition refers to the presence of centrifugal and centripetal xylem. 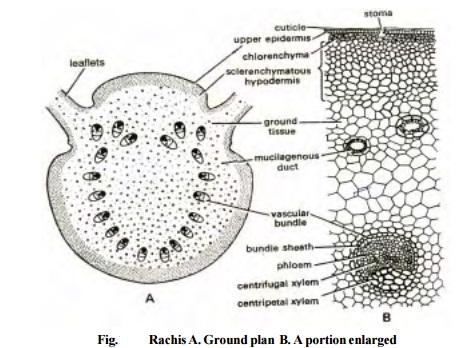 2.     Hypodermis : This layer is made up of sclerenchymatous cells. The hypodermal layer protects the plant from over-heating and excessive transpiration.

4. Transfusion tissue : This tissue consists of two small groups of short and wide tracheid-like cells with thickenings / pits on their walls. A few layers of transversely

6.     Vascular bundle : There is only one vascular bundle present in the midrib region of the leaflet. It is conjoint, collateral, open and diploxylic. The triangular centrifugal xylem is well-developed with endarch protoxylem. Phloem is arc-shaped and remains separated by cambium. Phloem consists of sieve tubes and phloem parenchyma. Companion cells are absent. 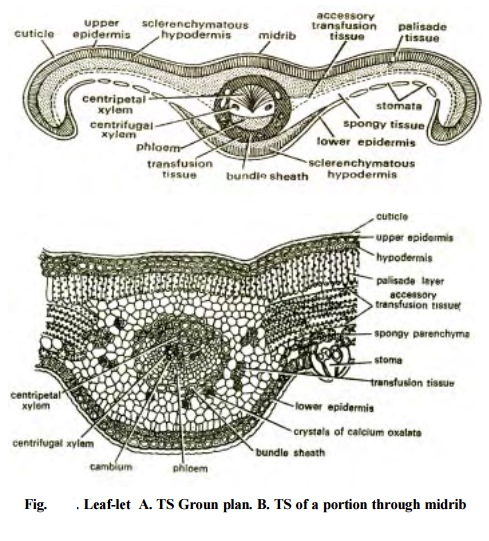