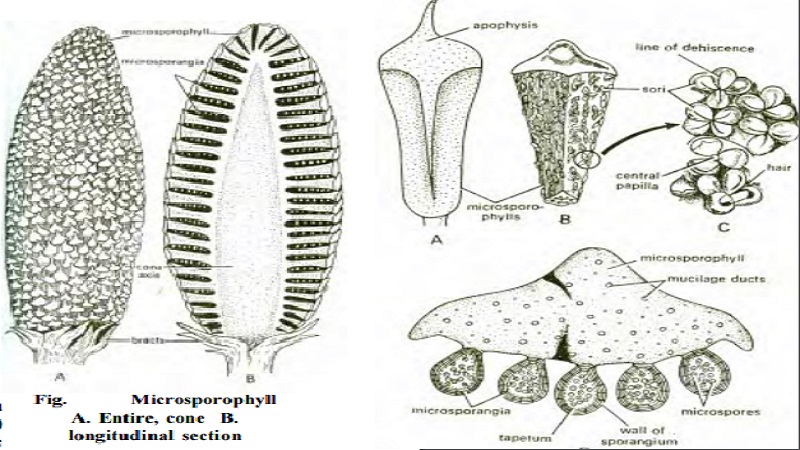 Vegetative reproduction is by the formation of adventitious buds or bulbils . The bulbils develop from the basal part of stem especially from cortical cells. They are found between the persistent leaf bases. They are more or less oval shaped. Several scale leaves are arranged spirally and compactly over a dormant stem in a bulbil. Upon detachment from the stem, a bulbil germinates to produce a new plant. A bulbil from male plant produces a new male plant while a bulbil from female plant produces a new female plant.

Sexual Reproduction : Cycas is strictly dioecious ie., male and female plants are distinctly different from each other. .

The male plant of Cycas produces male strobilus (cone) at the apex of the stem in between the crown of foliage leaves. Each male cone is a shortly stalked compact, oval or conical woody structure. It is 40-80 cm in length, perhaps the largest among plants. Each male cone consists of several microsporophylls which are arranged spirally around a central axis. Each microsporophyll is a woody, brown coloured and more or less horizontally flattened structure with a narrow base and an expanded upper portion. The upper part is expanded and becomes pointed at its tip. The narrow of cells. Pollen grains or microspores are produced at the end of meiotic division of microspore mother cells found in the microsporangium. 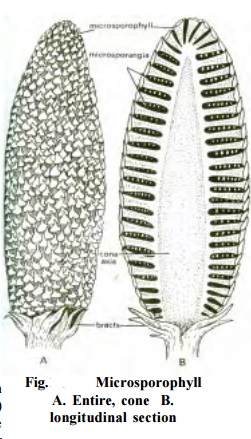 The pollen tube. The pollen tube penetrates the nucellar region of the ovule and subsequently delivers the male gametes into the archegonial chamber.

Each ovule consists of a large nucellus surrounded by a single integument. The integument remains fused with the body of the ovule except at the apex of the nucellus where it forms a nucellar beak and an opening called micropyle. The opposite end of the microphyle is called chalaza. The integument is very thick and is differentiated into three layers - the outer and inner fleshy layers and a hard and stony middle layer. Some cells in the nucellar beak dissolve to form a pollen chamber. The young ovule is green and hairy whereas the mature one is red or orange without hairs.

One of the deeply situated cells in the nucellus differentiates into megaspore mother cell and divides meiotically to produce 4 linearly arranged haploid megaspores. Of the four megaspores, the upper three cells degenerate while the lowermost acts as functional megaspore.

The megasporophylls are considered to be modified leaves. They are flat, dorsiventral and measuring 15-30 cm in length A megasporophyll is differentiated into a basal stalk and an upper pinnate lamina. Ovules are formed on the lateral sids of the stalk. The number of ovules per megasporophyll varies from 2-10 depending upon the species. 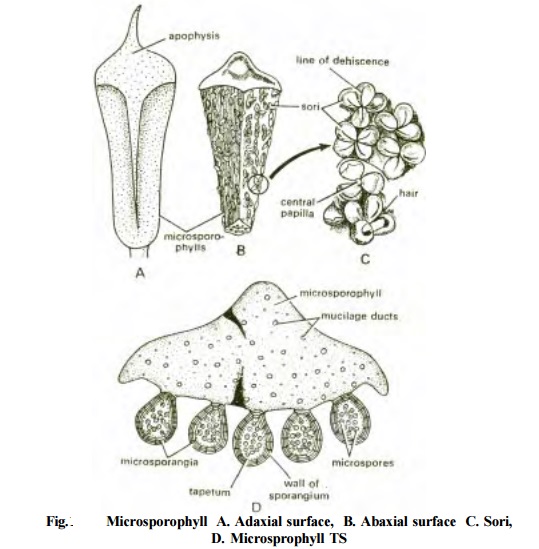 Ovule : The ovule of cycas is orthotropous and unitegmic. It is sessile or shortly stalked and perhaps Fig.1.70. Structure of ovule LS the largest ovule (about 6 cm length and 4 cm width) in the plant kingdom. 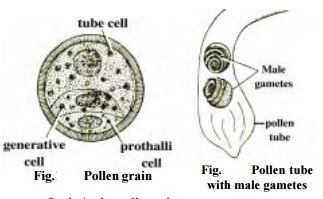 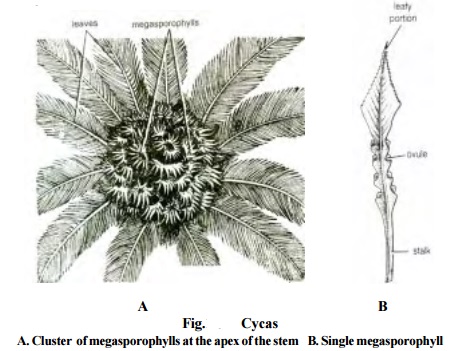 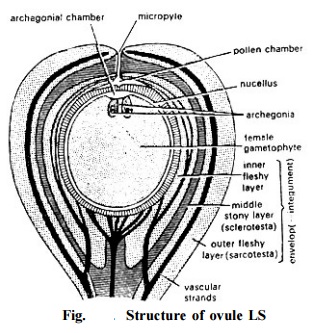 Fertilization : The fusion of male and female gametes is called fertilization. The pollen tube of the pollen releases sperms or male gametes into the archegonial chamber. Normally, only one male gamete enters each archegonium and fuses with the egg thus resulting in the formation of zygote. Only one egg, in any one of the archegonia, is fertilized. The diploid zygote develops into embryo. The embryo takes about one year for its complete development. The ovule ultimately gets transformed into seed.