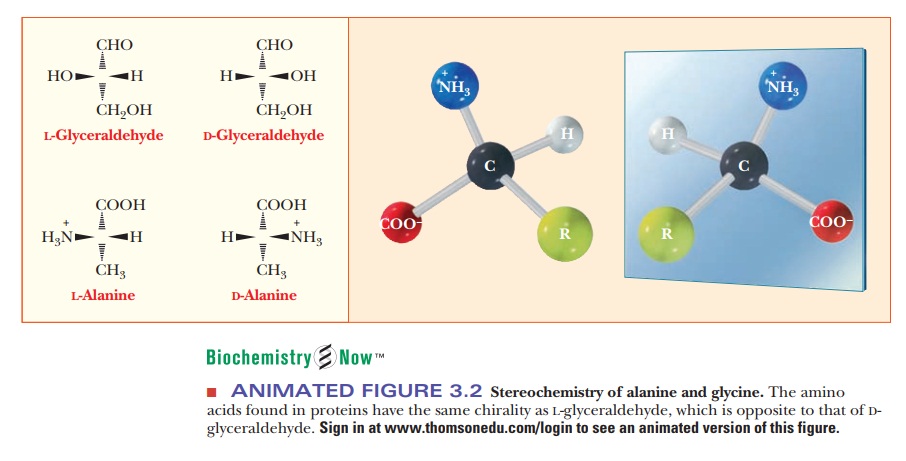 Why is it important to specify the three-dimensional structure of amino acids?

Why is it important to specify the three-dimensional structure of amino acids?

Among all the possible amino acids, only 20 are usually found in proteins. The general structure of amino acids includes an amino group and a carboxylgroup, both of which are bonded to thea-carbon (the one next to the carboxylgroup). The α-carbon is also bonded to a hydrogen and to the side chain group, which is represented by the letter R. The R group determines the identity of the particular amino acid (Figure 3.1). The two-dimensional formula shown here can only partially convey the common structure of amino acids because one of the most important properties of these compounds is their three-dimensional shape, or stereochemistry.

Every object has a mirror image. Many pairs of objects that are mirror imag-es can be superimposed on each other; two identical solid-colored coffee mugs are an example. In other cases, the mirror-image objects cannot be superim-posed on one another but are related to each other as the right hand is to the left. Such nonsuperimposable mirror images are said to be chiral (from the Greek cheir, “hand”); many important biomolecules are chiral. A frequently encountered chiral center in biomolecules is a carbon atom with four different groups bonded to it (Figure 3.1). Such a center occurs in all amino acids except glycine. Glycine has two hydrogen atoms bonded to the α-carbon; in other words, the side chain (R group) of glycine is hydrogen. Glycine is not chiral (or, alternatively, is achiral) because of this symmetry. In all the other com-monly occurring amino acids, the α-carbon has four different groups bonded to it, giving rise to two nonsuperimposable mirror-image forms. Figure 3.2 shows perspective drawings of these two possibilities, or stereoisomers, for ala-nine, where the R group is -CH3. The dashed wedges represent bonds direct-ed away from the observer, and the solid triangles represent bonds directed out of the plane of the paper in the direction of the observer.

The two possible stereoisomers of another chiral compound, L- and D-glycer-aldehyde, are shown for comparison with the corresponding forms of alanine. These two forms of glyceraldehyde are the basis of the classification of amino acids into L and D forms. The terminology comes from the Latin laevus and dexter, meaning “left” and “right,” respectively, which comes from the ability ofoptically active compounds to rotate polarized light to the left or the right. The two stereoisomers of each amino acid are designated as L- andD-amino acids on the basis of their similarity to the glyceraldehyde standard. When drawn in a certain orientation, the L form of glyceraldehyde has the hydroxyl group on the left side of the molecule, and the D form has it on the right side, as shown in per-spective in Figure 3.2 (a Fischer projection). To determine the L or D designation for an amino acid, it is drawn as shown. The position of the amino group on the left or right side of the α-carbon determines the L or D designation. The amino acids that occur in proteins are all of the L form. Although D-amino acids occur in nature, most often in bacterial cell walls and in some antibiotics, they are not found in proteins.

The amino acids that occur in proteins consist of an amino group and a carboxyl group bonded to the same carbon atom. The other two bonds of the carbon are to a hydrogen and to a side chain group, shown as R in diagrams. 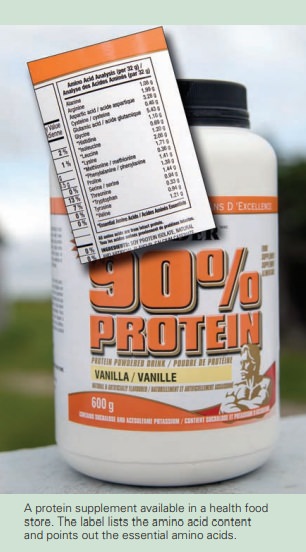