Amino Acids to Calm Down and Pep Up

Two amino acids deserve some special notice because both are key precursors to many hormones and neurotransmitters (substances involved in the transmission of nerve impulses).

Amino Acids to Calm Down and Pep Up

Two of the neurotransmitter classes are simple derivatives of the two amino acids tyrosine and tryptophan. The active products are monoamine derivatives, which are themselves degraded or deactivated by monoamine oxidases (MAOs). 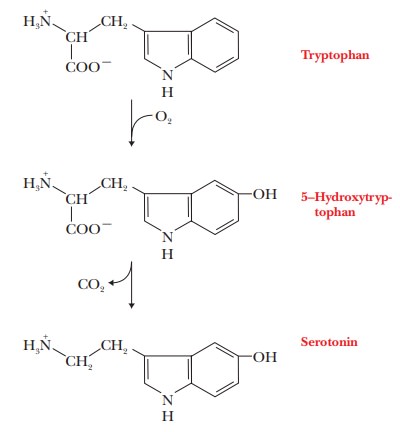 Tyrosine, itself normally derived from phenylalanine, is con-verted to the class called catecholamines, which includes epineph-rine, commonly known by its proprietary name, adrenalin.

Note that L-dihydroxyphenylalanine (L-dopa) is an intermediate in the conversion of tyrosine. Lower-than-normal levels of L-dopa are involved in Parkinson’s disease. Tyrosine or phenylalanine supple-ments might increase the levels of dopamine, though L-dopa, the immediate precursor, is usually prescribed because L-dopa passes into the brain quickly through the blood–brain barrier.

Tyrosine and phenylalanine are precursors to norepinephrine and epinephrine, both of which are stimulatory. Epinephrine is commonly known as the “flight or fight” hormone. It causes the release of glucose and other nutrients into the blood and also stimulates brain function. People taking MAO inhibitors stay in a relatively high mental state, sometimes too high, because the epinephrine is not metabolized rapidly. Tryptophan is a precursor to serotonin, which has a sedative effect, giving a pleasant feel-ing. Very low levels of serotonin are associated with depression, while extremely high levels actually produce a manic state. Manic-depressive illness (also called bipolar disorder) can be managed by controlling the levels of serotonin and its further metabolites.

It has been suggested that tyrosine and phenylalanine may have unexpected effects in some people. For example, there is increas-ing evidence that some people get headaches from the phenylalanine in aspartame (a low-calorie sweetener).

It is also likely that many illegal psychedelic drugs, such as mescaline and psilocine, mimic and interfere with the effects of neurotrans-mitters. A recent Oscar-winning film, A Beautiful Mind, focused on the disturbing problems associated with schizophrenia. Until recently, the neurotransmitter dopamine was a major focus in the study of schizophrenia. More recently, it has been suggested that irregularities in the metabolism of glutamate, a neurotransmitter, can lead to the disease.

Some people insist that supplements of tyrosine give them a morning lift and that tryptophan helps them sleep at night. Milk proteins have high levels of tryptophan; a glass of warm milk before bed is widely believed to be an aid in inducing sleep. Cheese and red wines contain high amounts of tyramine, which mimics epinephrine; for many people a cheese omelet in the morning is a favorite way to start the day.