Why are amino acid side chains so important? 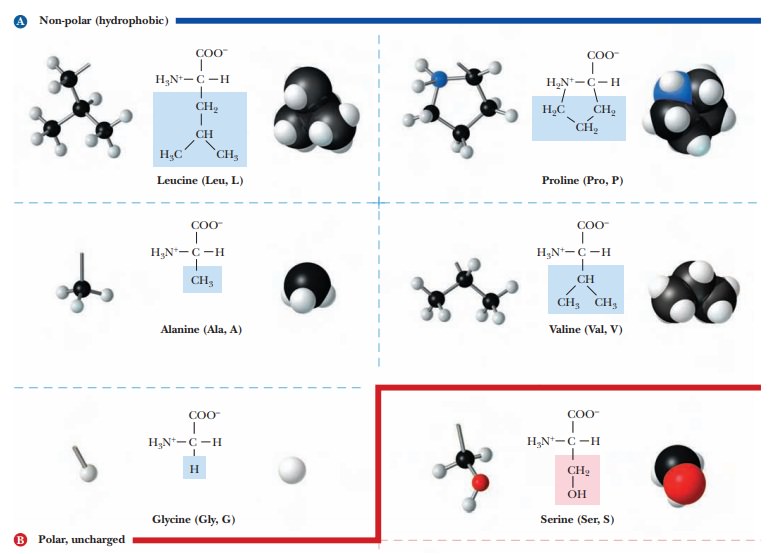 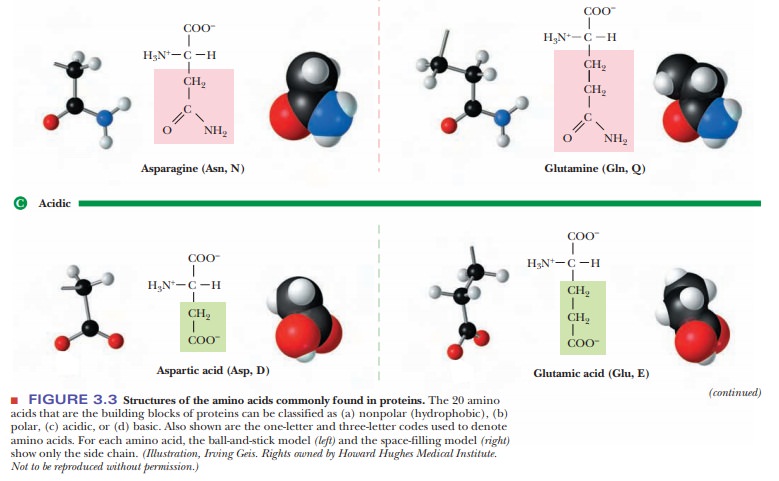 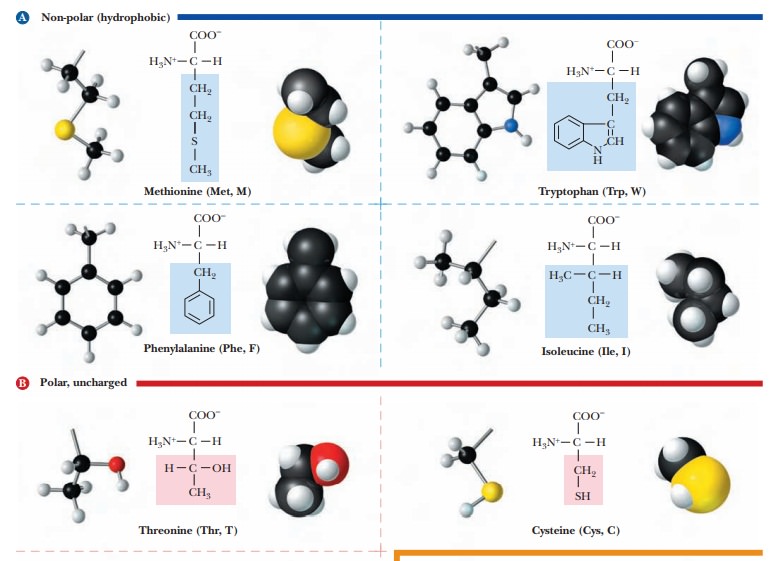 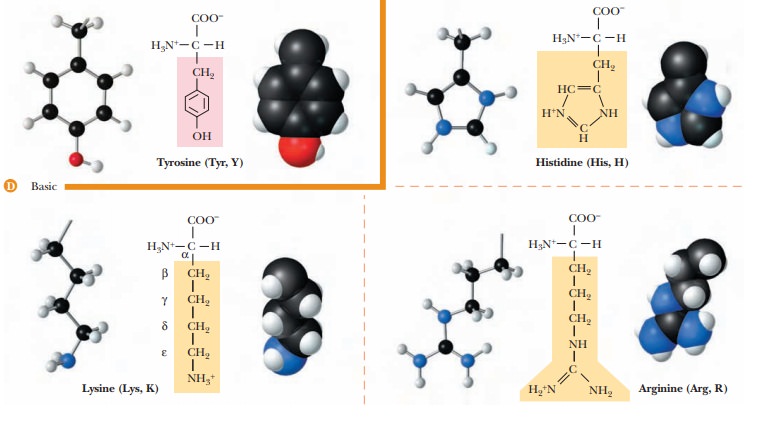 As mentioned, the side chain of the simplest amino acid, glycine, is a hydrogen atom, and in this case alone two hydrogen atoms are bonded to the α-carbon. In all other amino acids, the side chain is larger and more complex (Figure 3.3). Side-chain carbon atoms are designated with letters of the Greek alphabet, counting from the α-carbon. These carbon atoms are, in turn, the β-, γ-, δ-, and ε-carbons (see lysine in Figure 3.3); a terminal carbon atom is referred to as the v-carbon, from the name of the last letter of the Greek alpha-bet. We frequently refer to amino acids by three-letter or one-letter abbreviations of their names, with the one-letter designations becoming much more prevalent these days; Table 3.1 lists these abbreviations. 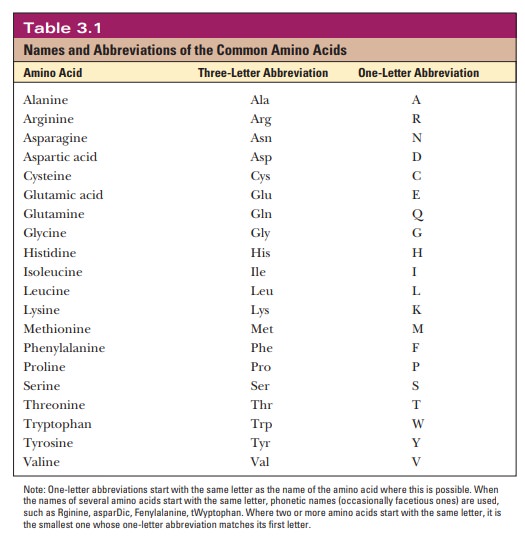 Which amino acids have nonpolar side chains? (Group 1)

One group of amino acids has nonpolar side chains. This group consists of glycine, alanine, valine, leucine, isoleucine, proline, phenylalanine, tryptophan, and methionine. In several members of this group-namely alanine, valine, leucine, and isoleucine-each side chain is an aliphatic hydrocarbon group. (In organic chemistry, the term aliphatic refers to the absence of a benzene ring or related structure.) Proline has an aliphatic cyclic structure, and the nitrogen is bonded to two carbon atoms. In the terminology of organic chemistry, the amino group of proline is a secondary amine, and proline is often called an imino acid. In contrast, the amino groups of all the other common amino acidsare primary amines. In phenylalanine, the hydrocarbon group is aromatic (it contains a cyclic group similar to a benzene ring) rather than aliphatic. In tryptophan, the side chain contains an indole ring, which is also aromatic. In methionine, the side chain contains a sulfur atom in addition to aliphatic hydrocarbon groupings. (See Figure 3.3.)

Which amino acids have electrically neutral polar side chains? (Group 2)

Another group of amino acids has polar side chains that are electrically neutral (uncharged) at neutral pH. This group includes serine, threonine, tyrosine, cysteine, glutamine, and asparagine. Glycine is sometimes included here for convenience because it lacks a nonpolar side chain.

In serine and threonine, the polar group is a hydroxyl (-OH) bonded to aliphatic hydrocarbon groups. The hydroxyl group in tyrosine is bonded to an aromatic hydrocarbon group, which eventually loses a proton at higher pH. (The hydroxyl group in tyrosine is a phenol, which is a stronger acid than an aliphatic alcohol. As a result, the side chain of tyrosine can lose a proton in a titration, whereas those of serine and threonine would require such a high pH that pKa values are not normally listed for these side chains.) In cysteine, the polar side chain consists of a thiol group (-SH), which can react with other cysteine thiol groups to form disulfide (-S-S-) bridges in proteins in an oxidation reaction. The thiol group can also lose a proton. The amino acids glutamine and asparagine have amide groups, which are derived from carboxyl groups, in their side chains. Amide bonds do not ionize in the range of pH usually encountered in biochemistry. Glutamine and asparagine can be considered derivatives of the Group 3 amino acids, glutamic acid and aspartic acid, respectively; those two amino acids have carboxyl groups in their side chains.

Which amino acids have carboxyl groups in their side chains? (Group 3)

Which amino acids have basic side chains? (Group 4)

Three amino acids-histidine, lysine, and arginine-have basic side chains, and the side chain in all three is positively charged at or near neutral pH. In lysine, the side-chain amino group is attached to an aliphatic hydrocarbon tail. In arginine, the side-chain basic group, the guanidino group, is more complex in structure than the amino group, but it is also bonded to an aliphatic hydrocarbon tail. In free histidine, the pKa of the side-chain imidazole group is 6.0, which is not far from physiological pH. The pKa values for amino acids depend on the environment and can change significantly within the confines of a protein. Histidine can be found in the protonated or unprotonated forms in proteins, and the properties of many proteins depend on whether individual histidine residues are or are not charged.

Many other amino acids, in addition to the ones listed here, are known to exist. They occur in some, but by no means all, proteins. Figure 3.4 shows some examples of the many possibilities. They are derived from the common amino acids and are produced by modification of the parent amino acid after the protein is synthesized by the organism in a process called posttranslational modification. Hydroxyproline and hydroxylysine differ from the parent amino acids in that they have hydroxyl groups on their side chains; they are found only in a few connective-tissue proteins, such as collagen. Thyroxine differs from tyrosine in that it has an extra iodine-containing aromatic group on the side chain; it is produced only in the thyroid gland, formed by posttranslational modification of tyrosine residues in the protein thyroglobulin. Thyroxine is then released as a hormone by proteolysis of thyroglobulin. 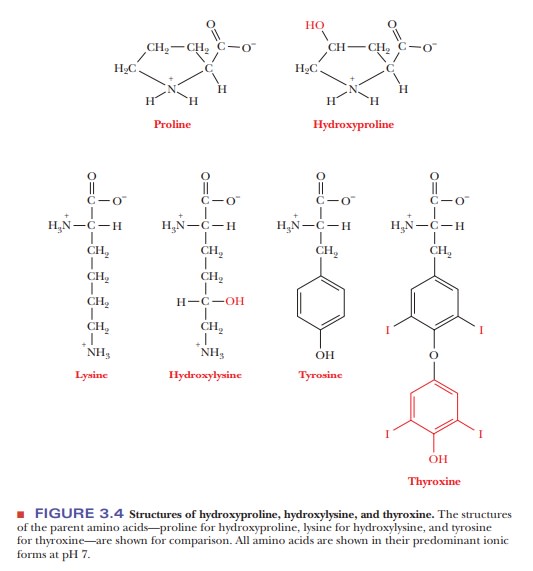 Amino acids are classified according to two major criteria: the polarity of the side chains and the presence of an acidic or basic group in the side chain.