Amino Acids Can Act as Both Acids and Bases

What happens when we titrate an amino acid?

Amino Acids Can Act as Both Acids and Bases

In a free amino acid, the carboxyl group and amino group of the general structure are charged at neutral pH-the carboxylate portion negatively and the amino group positively. Amino acids without charged groups on their side chains exist in neutral solution as zwitterions with no net charge. A zwitterion has equal positive and negative charges; in solution, it is electrically neutral.

Neutral amino acids do not exist in the form NH2-CHR-COOH (that is, without charged groups).

What happens when we titrate an amino acid?

When an amino acid is titrated, its titration curve indicates the reaction of each functional group with hydrogen ion. In alanine, the carboxyl and amino groups are the two titratable groups. At very low pH, alanine has a protonated (and thus uncharged) carboxyl group and a positively charged amino group that is also protonated. Under these conditions, the alanine has a net positive charge of 1. As base is added, the carboxyl group loses its proton to become a negatively charged carboxylate group (Figure 3.5a), and the pH of the solution increases. Alanine now has no net charge. As the pH increases still further with addition of more base, the protonated amino group (a weak acid) loses its proton, and the alanine molecule now has a negative charge of 1. The titration curve of alanine is that of a diprotic acid (Figure 3.6). 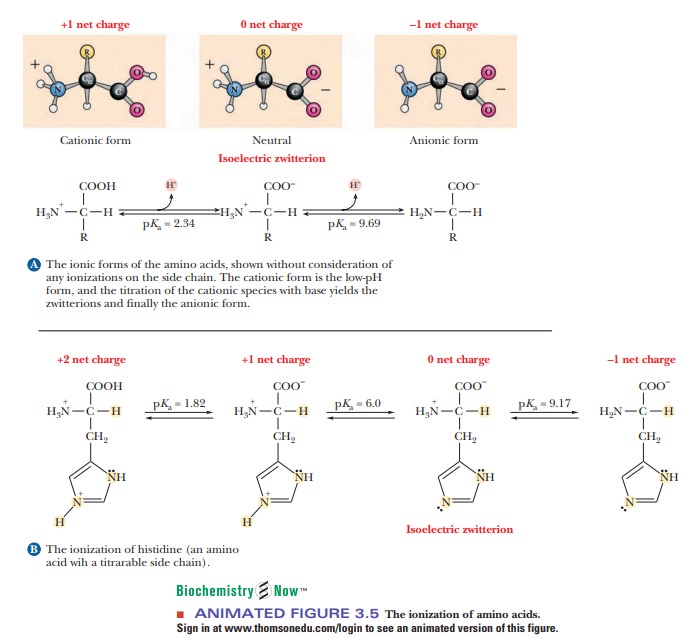 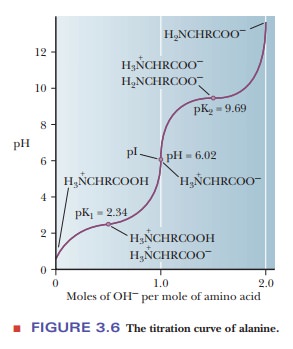 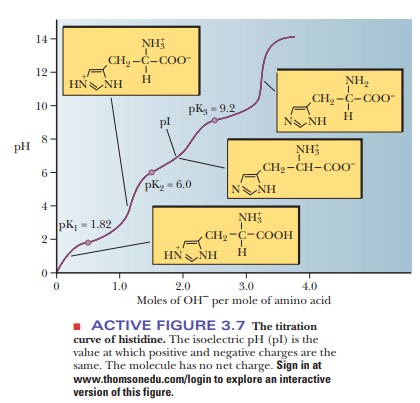 Like the acids we discussed, the titratable groups of each of the amino acids have characteristic pKa values. The pKa values of α-carboxyl groups are fairly low, around 2. The pKa values of amino groups are much higher, with values ranging from 9 to 10.5. The pKa values of side-chain groups, including side-chain carboxyl and amino groups, depend on the groups’ chemical nature. Table 3.2 lists the pKa values of the titratable groups of the amino acids. The clas-sification of an amino acid as acidic or basic depends on the pKa of the side chain as well as the chemical nature of the group. Histidine, lysine, and arginine are considered basic amino acids because each of their side chains has a nitrogen-containing group that can exist in either a protonated or deprotonated form. However, histidine has a pKa in the acidic range. Aspartic acid and glutamic acid are considered acidic because each has a carboxylic acid side chain with a low pKa value. 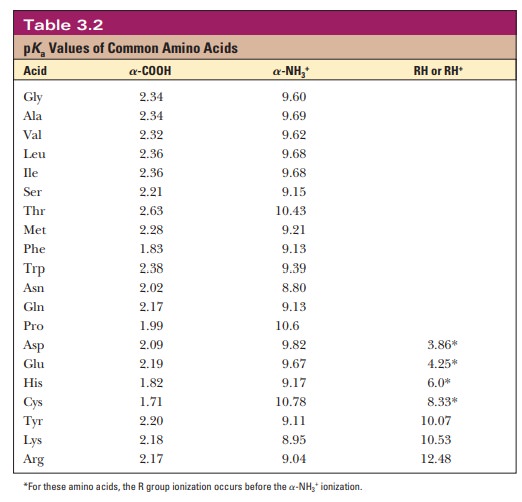 These groups can still be titrated after the amino acid is incorporated into a peptide or protein, but the pKa of the titratable group on the side chain is not necessarily the same in a protein as it is in a free amino acid. In fact, it can be very different. For example, a pKa of 9 has been reported for an aspartate side chain in the protein thioredoxin.

The fact that amino acids, peptides, and proteins have different pKa values gives rise to the possibility that they can have different charges at a given pH. Alanine and histidine, for example, both have net charges of –1 at high pH, above 10; the only charged group is the carboxylate anion. At lower pH, around 5, alanine is a zwitterion with no net charge, but histidine has a net charge of 1 at this pH because the imidazole group is protonated. This property is useful in electrophoresis, a common method for separating molecules in an electric field. This method is extremely useful in determining the important proper-ties of proteins and nucleic acids. The pH at which a molecule has no net charge is called the isoelectric pH, or isoelectric point (given the symbol pI). At its isoelectric pH, a molecule will not migrate in an electric field. This property can be put to use in separation methods. The pI of an amino acid can be calculated by the following equation: 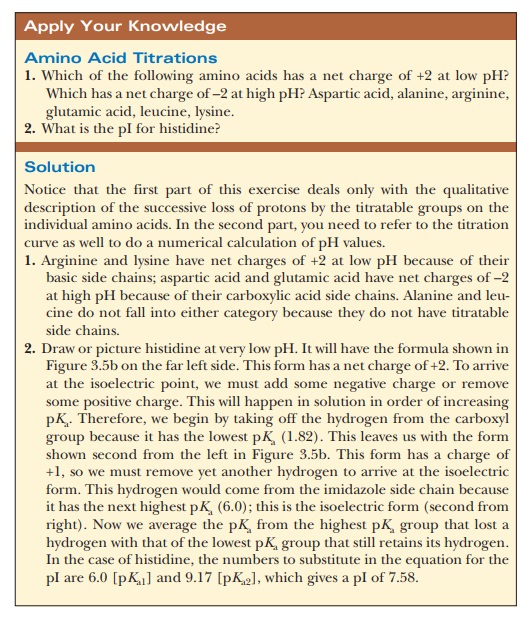 Titration curves can be obtained for amino acids, just as they can for any diprotic or multiprotic acid. It is possible to determine the charge on amino acids at any given pH.