Which groups on amino acids react to form a peptide bond?

Which groups on amino acids react to form a peptide bond?

Individual amino acids can be linked by forming covalent bonds. The bond is formed between the α-carboxyl group of one amino acid and the α-amino group of the next one. Water is eliminated in the process, and the linked amino acid residues remain after water is eliminated (Figure 3.8). A bond formed in this way is called a peptide bond. Peptides are compounds formed by linking small numbers of amino acids, ranging from two to several dozen. In a protein, many amino acids (usually more than a hundred) are linked by peptide bonds to form a polypeptide chain (Figure 3.9). Another name for a compound formed by the reaction between an amino group and a carboxyl group is an amide. 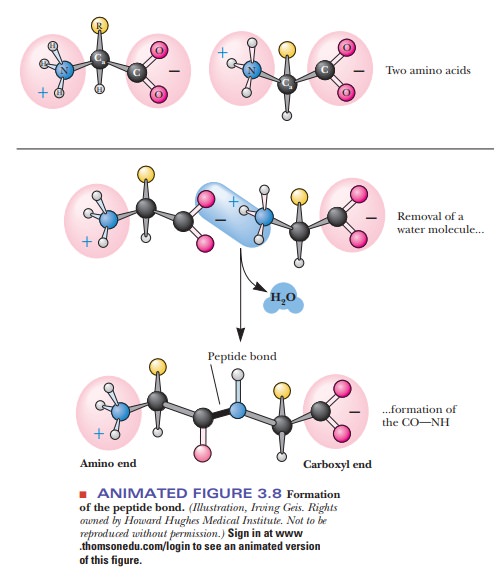 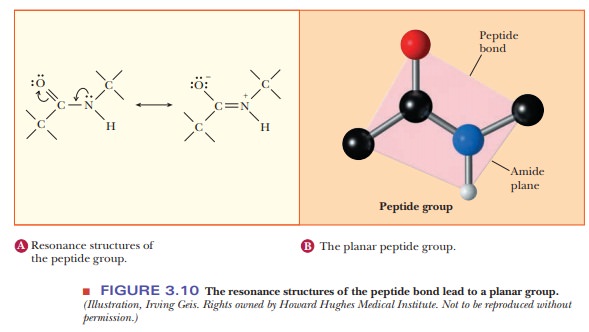 This structural feature has important implications for the three-dimensional conformations of peptides and proteins. There is free rotation around the bonds between the α-carbon of a given amino acid residue and the amino nitro-gen and carbonyl carbon of that residue, but there is no significant rotation around the peptide bond. This stereochemical constraint plays an important role in determining how the protein backbone can fold.

When the carboxyl group of one amino acid reacts with the amino group of another to give an amide linkage and eliminate water, a peptide bond is formed. In a protein, upward of a hundred amino acids are so joined to form a polypeptide chain.

The peptide group is planar as a result of resonance stabilization. This stereochemical feature determines a number of features of the three-dimensional structure of proteins.