The alkylating agents are the largest class of anticancer agents, comprising five subgroups: nitrogen mustards, alkyl sulfonates, nitrosoureas, ethyleneimine, and thi-azines (Table 56.1). Several other agents, including pro-carbazine, hexamethylmelamine, dacarbazine, estra-mustine, and mitomycin C, are thought to act at least in part by alkylation. 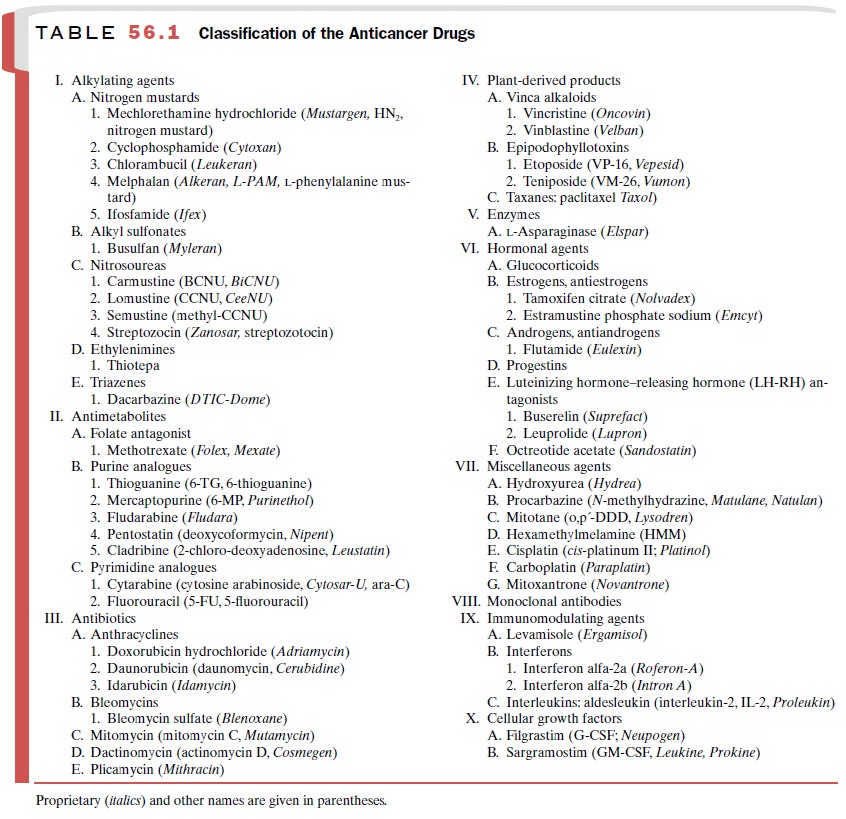 By definition, alkylating agents are compounds that are capable of introducing alkyl groups into nucle-ophilic sites on other molecules through the formation of covalent bonds. These nucleophilic targets for alkyla-tion include the sulfhydryl, amino, phosphate, hydroxyl, carboxyl, and imidazole groups that are present in macromolecules and low-molecular-weight compounds within cells.

The macromolecular sites of alkylation damage in-clude DNA, RNA, and various enzymes. The inhibition of DNA synthesis occurs at drug concentrations that are lower than those required to inhibit RNA and protein synthesis, and the degree of DNA alkylation correlates especially well with the cytotoxicity of these drugs. This interaction also accounts for the mutagenic and car-cinogenic properties of the alkylating agents. The reac-tions of various alkylating agents with DNA have been studied in detail, and the 7-nitrogen (N7) and 6-oxygen (O6) of guanine have been shown to be particularly susceptible to attack by electrophilic compounds. There are several possible consequences of N7 guanine alkyl-ation:

·              Cross-linkage. Bifunctional alkylating agents, such as the nitrogen mustards, may form cova-lent bonds with each of two adjacent guanine residues. Such interstrand cross-linkages will inhibit DNA replication and transcription. Intrastrand cross-links also may be produced between DNA and a nearby protein.

·              Mispairing of bases. Alkylating at N7 changes the O6 of guanine to its enol tautomer, which can then form base pairs with thymine. This may lead to gene miscoding, with adenine– thymine pairs replacing guanine–cytosine. The result is the production of defective proteins.

·              Depurination. N7 alkylation may cause cleav-age of the imidazole ring and excision of the guanine residue, leading to DNA strand break-age.

Although all alkylating agents can cause the kinds of genetic damage just discussed, individual drugs differ from one another in their electrophilic reactivity, the structure of their reactive intermediates, and their phar-macokinetic properties. These differences will be re-flected in the spectrum of their antitumor activities and in the toxicities they produce in normal tissues.