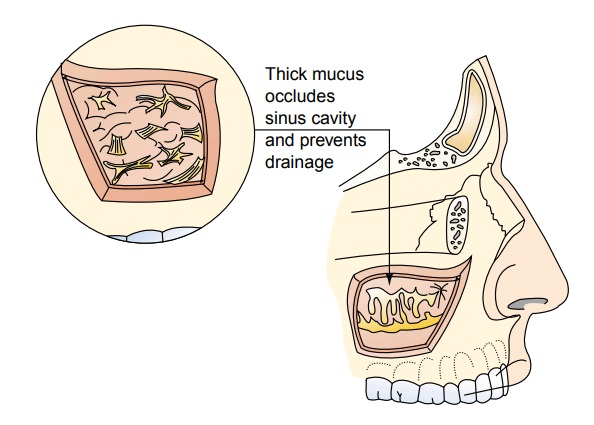 The sinuses, mucus-lined cavities filled with air that drain nor-mally into the nose, are involved in a high proportion of upper respiratory tract infections.

The sinuses, mucus-lined cavities filled with air that drain nor-mally into the nose, are involved in a high proportion of upper respiratory tract infections. If their openings into the nasal pas-sages are clear, the infections resolve promptly. However, if their drainage is obstructed by a deviated septum or by hypertrophied turbinates, spurs, or nasal polyps or tumors, sinus infection may persist as a smoldering secondary infection or progress to an acute suppurative process (causing purulent discharge). Sinusitis af-fects over 14% of the population and accounts for billions of dol-lars in direct health care costs (Tierney, McPhee, & Papadakis, 2001). Some individuals are more prone to sinusitis because of their occupations. For example, continuous exposure to environ-mental hazards such as paint, sawdust, and chemicals may result in chronic inflammation of the nasal passages.

Acute sinusitis is an infection of the paranasal sinuses. It fre-quently develops as a result of an upper respiratory infection, such as an unresolved viral or bacterial infection, or an exacerbation of allergic rhinitis. Nasal congestion, caused by inflammation, edema, and transudation of fluid, leads to obstruction of the sinus cavi-ties (see Fig. 22-1). This provides an excellent medium for bac-terial growth. Bacterial organisms account for more than 60% of the cases of acute sinusitis, namely Streptococcus pneumoniae,Haemophilus influenzae, and Moraxella catarrhalis (Murray &Nadel, 2001). Dental infections also have been associated with acute sinusitis.

A careful history and physical examination are performed. The head and neck, particularly the nose, ears, teeth, sinuses, pharynx, and chest, are examined. There may be tenderness to palpation over the infected sinus area. The sinuses are percussed using the index finger, tapping lightly to determine if the patient experi-ences pain. The affected area is also transilluminated; with sinusi-tis, there is a decrease in the transmission of light. Sinus x-rays may be performed to detect sinus opac-ity, mucosal thickening, bone destruction, and air–fluid levels. Computed tomography scanning of the sinuses is the most effec-tive diagnostic tool. It is also used to rule out other local or sys-temic disorders, such as tumor, fistula, and allergy.

Acute sinusitis, if left untreated, may lead to severe and occa-sionally life-threatening complications such as meningitis, brain abscess, ischemic infarction, and osteomyelitis. Other complications of sinusitis, although uncommon, include severe orbital cel-lulitis, subperiosteal abscess, and cavernous sinus thrombosis.

The goals of treatment of acute sinusitis are to treat the infection, shrink the nasal mucosa, and relieve pain. There is a growing con-cern over the inappropriate use of antibiotics for viral upper res-piratory infections; such overuse has resulted in antibiotics being less effective (more resistant) in treating bacterial infections such as sinusitis. As a result, careful consideration is given to the po-tential pathogen before antimicrobial agents are prescribed.

.macrolides, azithromycin (Zithromax), and clarithromycin (Biaxin). Quinolones such as ciprofloxacin (Cipro), levofloxacin (Levaquin) (used with severe penicillin allergy), and sparfloxacin (Zagam) have also been used. The course of treatment is usually 10 to 14 days. A recent report found little difference in clinical outcomes between first-line and second-line antibiotics; however, costs were greater when newer second-line antibiotics were used (Piccirillo, Mager, Frisse et al., 2001).

Use of oral and topical decongestant agents may decrease mu-cosal swelling of nasal polyps, thereby improving drainage of the sinuses. Heated mist and saline irrigation also may be effective for opening blocked passages. Decongestant agents such as pseudo-ephedrine (Sudafed, Dimetapp) have proven effective because of their vasoconstrictive properties. Topical decongestant agents such as oxymetazoline (Afrin) may be used for up to 72 hours. It is important to administer them with the patient’s head tilted back to promote maximal dispersion of the medication. Guaife-nesin (Robitussin, Anti-Tuss), a mucolytic agent, may also be ef-fective in reducing nasal congestion.

In 2000, the U.S. Food and Drug Administration issued a public health advisory concerning phenylpropanolamine, which previously had been commonly used in oral decongestants and diet pills. The voluntary recall of products containing this ingre-dient was based on a study linking its use with hemorrhagic stroke in women. Men may also be at risk (Kernan et al., 2000).

Antihistamines such as diphenhydramine (Benadryl), ceti-rizine (Zyrtec), and fexofenadine (Allegra) may be used if an al-lergic component is suspected. If the patient continues to have symptoms after 7 to 10 days, the sinuses may need to be irrigated and hospitalization may be required.

Patient teaching is an important aspect of nursing care for the pa-tient with acute sinusitis. The nurse instructs the patient about methods to promote drainage such as inhaling steam (steam bath, hot shower, and facial sauna), increasing fluid intake, and apply-ing local heat (hot wet packs). The nurse also informs the patient about the side effects of nasal sprays and about rebound conges-tion. In the case of rebound congestion, the body’s receptors, which have become dependent on the decongestant sprays to keep the nasal passages open, close and congestion results after the spray is discontinued.

The nurse stresses the importance of following the recom-mended antibiotic regimen, because a consistent blood level of the medication is critical to treat the infection. The nurse teaches the patient the early signs of a sinus infection and recommends pre-ventive measures such as following healthy practices and avoiding contact with people who have upper respiratory infections (see Chart 22-2). 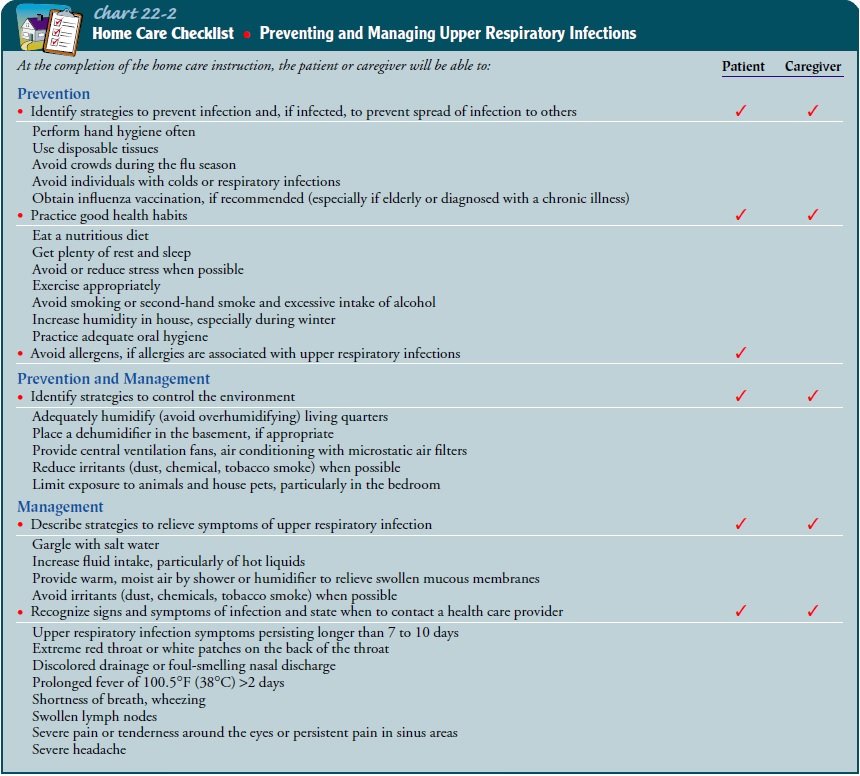 The nurse should explain to the patient that fever, severe headache, and nuchal rigidity are signs of potential complica-tions. If fever persists despite antibiotic therapy, the patient should seek additional care.