DNAse footprinting revealed an unexpectedly large binding site for α2. It had two protected regions around a central unprotected region. Since the central protected region possessed a symmetric sequence, it seemed possible that an additional protein bound there.

The DNA migration retardation assay was used to look for a protein that binds with α2 to repress genes. One was found. It could be purified, and its binding to the site studied. It binds cooperatively with α2 protein. 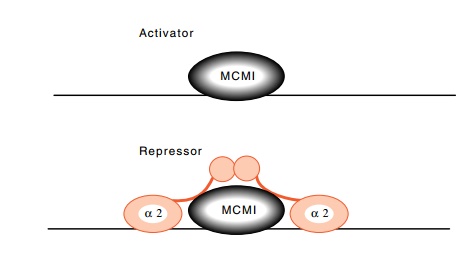 Figure 16.12 The MCM1 protein functions as an activator when alone, and asa repressor when it is flanked by the α2 protein.

The sequence to which it binds is found in front of some other genes whose activity is regulated by the mating type of the cells. In some cases the protein is an activator, and in others it is a repressor. When the α2 sequences flank the site, the complex acts as a repressor (Fig. 16.12). This protein, which has finally come to be called MCM1 has also been found in other types of cells. Its close relative is found in human cells where it is a transcription factor that activates genes in response to the presence of serum and is known as the serum response factor.

The α2 protein could also be dissected by deleting DNA segments from a plasmid containing the α2-β-galactosidase fusion gene. The resulting proteins lost their DNA-binding activities only when a 60 amino acid portion near the carboxyl terminus of the protein was deleted. These proteins lost their ability to repress, however, when short stretches of amino acids near the N-terminus were deleted. The resulting proteins could still bind to DNA. Thus they were synthesized, stable, capable of binding to DNA, but had lost a domain required for repres-sion.