miRNA and siRNA are double-stranded RNA (dsRNA) ONs of 21 to 26 base-pairs that can cause gene silencing, a process known as RNA interference (RNAi).

miRNA and siRNA are double-stranded RNA (dsRNA) ONs of 21 to 26 base-pairs that can cause gene silencing, a process known as RNA interference (RNAi) (Fig. 8) (Sen and Blau, 2006). In 1998, RNAi was first described in the nematode Caenorhabditis elegans. This silencing phenomenon also occurs in plants, protozoa, fungi, and animals and appears to be conserved in all eukaryotes and may even play a role in prokaryotic cells. It is an important process in endogenous gene expression/translation regulation and defense against pathogens. 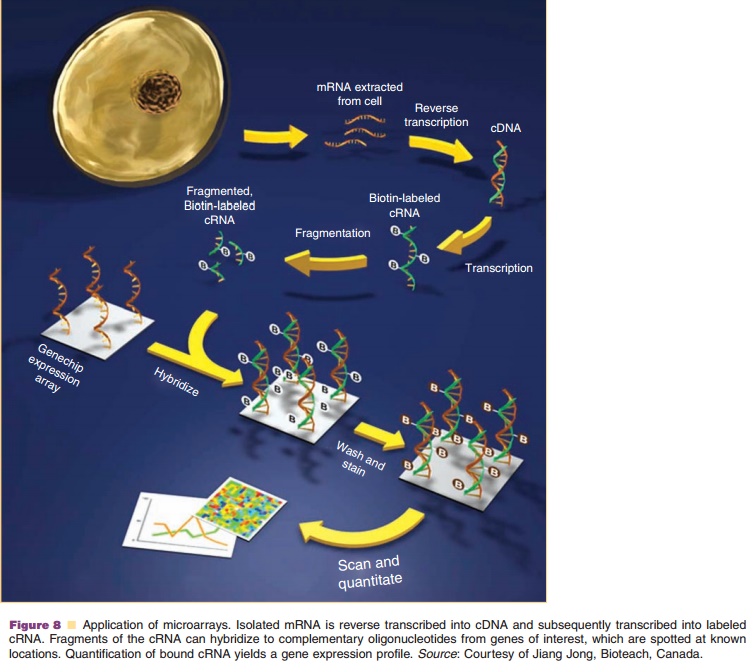 miRNAs are produced from transcripts that form stem-loop structures. These are processed in the nucleus into 65 to 75 nucleotides long pre-miRNA followed by transport to the cytoplasm. Pre-miRNA is further cleaved by an enzyme complex known as Dicer-complex to form miRNA, which is loaded into the RNA-induced silencing complex (RISC) that can bind and cleave homologous mRNA. siRNA are produced from endogenous or exogenous long dsRNA precur-sors that are also cleaved by Dicer and loaded into RISC. The presence of long dsRNA in mammalian cells induces an interferon response, which results in non-specific inhibition of translation, and cell death. Therefore, in mammalian systems, the shorter siRNA is used which largely circumvents this response. Next to the direct endonucleolytic cleavage of mRNAs via RISC, miRNA and siRNA appear also to act at other levels. They have been shown to affect methylation of promoters, increase degradation of mRNA (notmediated by RISC), block protein translation, and enhance protein degradation.

Since the discovery of the process, a remarkably rapid progress has been made, and several com-pounds are currently clinically investigated. This rapid progress is partly due to the strong potency of the RNAi technique which seems to silence gene expression far more efficiently than antisense ap-proaches; partly, also because much has been learned from previous nucleic acid-based clinical trials. Acuity Pharmaceuticals and Sirna Therapeutics Inc. focus on macular degeneration as therapeutic target with VEGF-inhibiting siRNAs named Cand5 and siRNA-027, respectively. Alnylam Pharmaceuticals has started a clinical trial on RSV-infection with ALN-RSV-01 inhibiting a viral gene.