Chapter: The Diversity of Fishes: Biology, Evolution, and Ecology: Homeostasis

Like all animals, fishes must maintain blood and tissue pHwithin certain limits because many enzymes that control critical biochemical processes are pH sensitive.

Like all animals, fishes must maintain blood and tissue pH within certain limits because many enzymes that control critical biochemical processes are pH sensitive. Low or high pH can alter the configuration of these molecules, inhibiting their function. Blood pH is largely affected by metabolic byproducts such as carbon dioxide, which forms carbonic acid when in solution, and organic acids such as lactic acid from anaerobic metabolism. Terrestrial vertebrates primarily regulate pH through altering their respiration rate to regulate the amount of carbon dioxide in their blood. Fishes cannot, however, effectively lower blood pHby increasing ventilation, in part due to the high solubility of carbon dioxide in water, and therefore must regulate pH in other ways (Claiborne et al. 2002; Marshall & Grosell2006). Fishes instead rely on epithelial transport of ions that affect pH, such as hydrogen ions and bicarbonate ions,and the primary responsibility for this seems to fall on mitochondria-rich cells that typically are found in the gills,but also may occur in the skin of some fishes (Marshall &Grosell 2006).

Carbon dioxide from cellular metabolism is mainly carried by the blood in the form of bicarbonate ions, and some is converted back to dissolved carbon dioxide at the gills where it can easily diffuse into the surrounding water. Some of the mitochondria-rich cells in the gill epithelium also seem to have the ability to exchange bicarbonate ions for chloride ions (see Fig. 7.4B). In addition, excess hydrogen ions are exchanged for sodium ions, also by some of the mitochondria-rich cells (see Fig. 7.4C). Protein transporters designed for sodium/hydrogen ion exchange have been found on the gills of elasmobranchs, teleost’s, and anagnathan (Claiborne et al. 2002). In addition, proteins that use ATP to actively transport hydrogen ions into the surrounding water may be important to pH regulation in freshwater teleost’s and indirectly responsible for sodium uptake (the secretion of the hydrogen ions results in a charge imbalance, resulting in sodium entering the cells viasodium channels). These transport proteins have been found in the gills of marine elasmobranchs and teleost’s, but do not seem to be as important as they are in freshwater fishes. Claiborne et al. (2002) review numerous studies in which the genetic and molecular mechanisms of the mitochondria-rich cells control the activity and abundance of the protein transporters to allow fishes to maintain relatively stable blood pH. Perry et al. (2003) provide additional examples, particularly with respect to freshwater fishes, and also point out that kidneys play a role by regulating the amount of bicarbonate ion excreted in the urine. 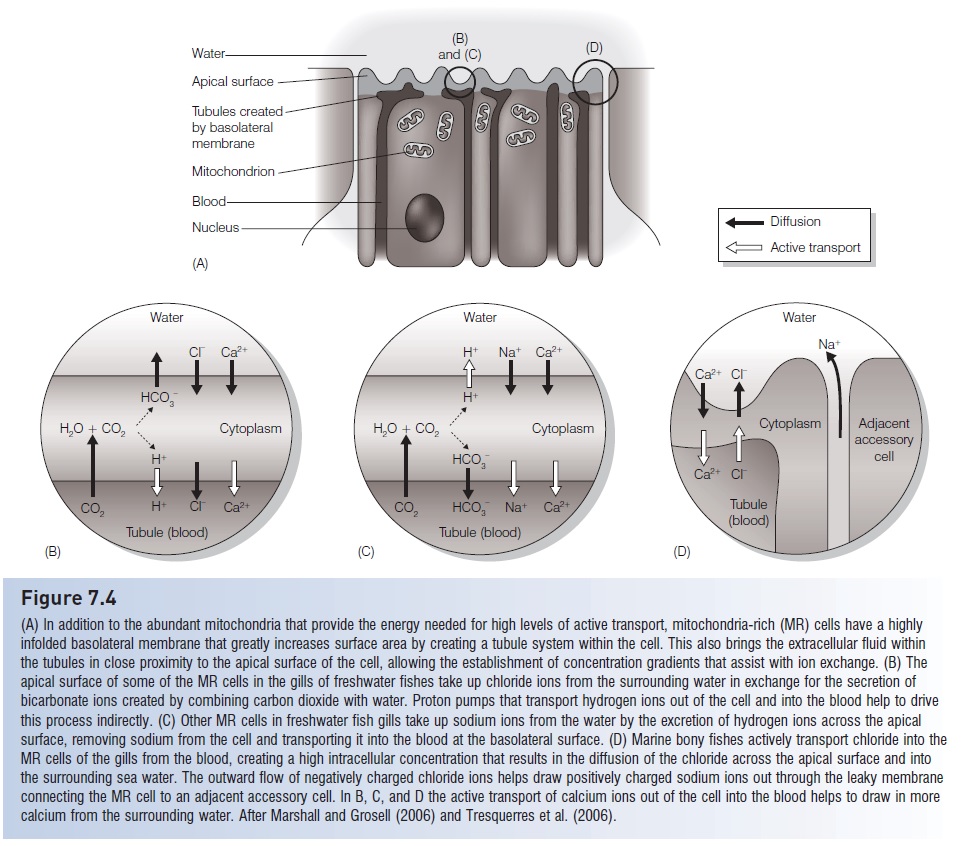