Chapter: The Diversity of Fishes: Biology, Evolution, and Ecology: Homeostasis

One of the most important homeostatic functions of living organisms is proper regulation of the internal osmotic environment.

One of the most important homeostatic functions of living organisms is proper regulation of the internal osmotic environment. Deviation from the normal range can jeopardize proper physiological function through water loss or gain,the changing of internal ionic concentrations, and shifts in ionic and osmotic gradients. Most fishes, like all other vertebrates,are osmoregulators – they regulate their internal osmotic environment within a fairly narrow range that is suitable for proper cellular function, even if the external osmotic environment fluctuates. Fishes that can tolerate only small changes in the solute concentration of their external environment are referred to as stenohaline, whereas those with the ability to osmoregulate over a wide range of environmental salinities are euryhaline.

Gills are an important osmoregulatory and excretory organ for fishes. Their large surface area, thin membranes,and highly specialized cell types make them well suited for this role. Nitrogen wastes are eliminated in the form of ammonia (NH3) and its cation ammonium (NH4+), both of which are soluble in the surrounding water. Diffusion of these wastes across the gills does, however, require immersion in water. Fishes that can survive out of water for extended periods convert ammonia to urea, which is less toxic and can be stored until the fish returns to the water. For example, African lungfishes (Protopteridae) produce ammonia when in the water but switch to urea production while estivating in a mud cocoon through long dry periods(Yancey 2001;  Subclass Dipnoi, Order Ceratodontiformes: the lungfishes). The amphibious mudskippers (Boleopthalmus, Gobiidae) increase mucus production by the skin and gills during terrestrial forays, and the mucus contains high levels of ammonia and urea (Evanset al. 1999). Other air-breathing fishes, including some that inhabit intertidal zones, may utilize several strategies to protect themselves against ammonia toxicity, including reducing amino acid catabolism to reduce ammonia production, converting ammonia to less toxic compounds such as glutamine or urea, excreting ammonia through the gutor skin, and increasing physiological tolerance to ammonia(Ip et al. 2004a).

Percent of nitrogenous wastes eliminated as ammonia nitrogen and urea nitrogen through the gills and kidney of various fishes. From Wood (1993). 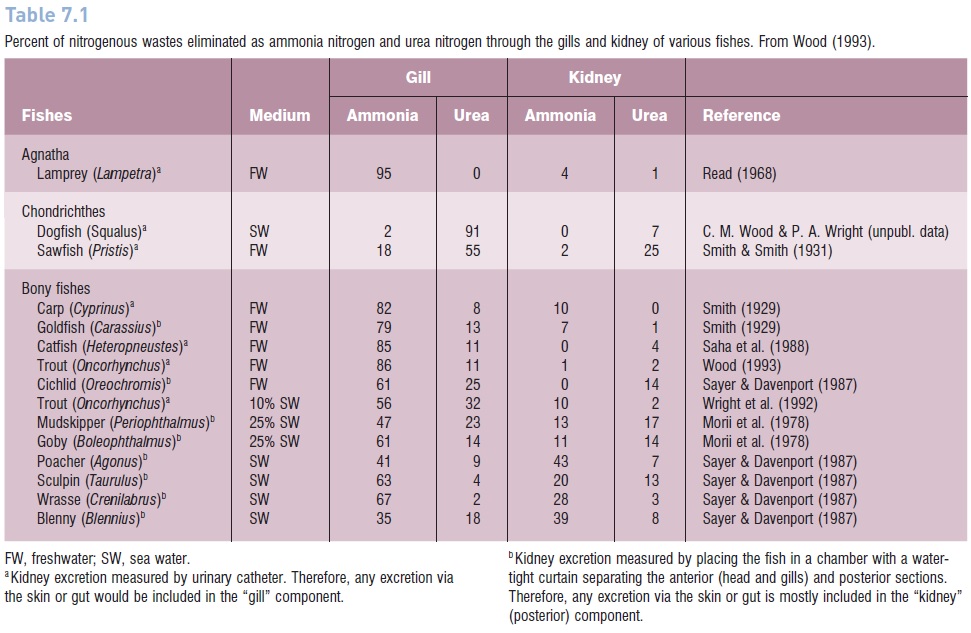 The kidneys also play an important role in osmoregulation and excretion (Table 7.1). The basic process of urineformation in most fishes is similar to that of other vertebrates, but unlike most terrestrial vertebrates fishes cannot produce urine that is more concentrated than their blood. In the kidneys, blood pressure forces water and small ions across the walls of small capillary beds, called glomeruli, and into the surrounding Bowman’s capsules, which are the beginning of the kidney tubules (nephrons). As the filtrate travels along the nephron, water and important solutes are removed and added back to the blood. Waste products, excess ions, and other molecules that were not contained in the initial filtrate are added to the urine for elimination from the body. Urine drains from the nephrons into collecting ducts, and then to the bladder where it may be held prior to being excreted. The urinary bladder may play an important role in salt and water balance by removing salts from the urine of freshwater fishes and removing water from and adding salts to the urine of saltwater fishes (Marshall& Grosell 2006).