A Zener diode is a type of diode that permits current not only in the forward direction like a normal diode, but also in the reverse direction if the voltage is lar ger than the breakdown voltage known as "Zener knee voltage" or "Zener voltage". The device was named after Clarence Zener, who discovered this el ectrical property.

A Zener diode is a t ype of diode that permits current not only in the forward direction like a normal diode, but also in the reverse direction if the voltage is lar ger than the breakdown voltage known as "Zener knee voltage" or "Zener voltage". The device was named after Clarence Zener, who discovered this el ectrical property.

However, the Zener Diode or "Breakdown Diode" as they are sometimes called, are basically the same as the standard PN junction diode but are specially designed to have a low pre-determined Reverse Brea kdown Voltage that takes advantage of this high reverse voltage. The point at which a zener dio de breaks down or conducts is called the "Ze ner Voltage" (Vz).

The Zener diode is like a general-purpose signal diode consisting of a silicon PN junction. When biased in the forward direction it behaves just like a nor mal signal diode passing the rated current, but when a reverse voltage is applied to it the reverse saturation current remains fairly constant over a wide range of voltages. The reverse vo ltage increases until the

diodes breakdown voltage V B is reached at which point a process called Avalanche Breakdown occurs in the depletion lay er and the current flowing through the zener diode increases dramatically to the maximum circuit value (which is usually limited by a series resistor). This breakdown voltage point is called the "zener voltage" for zener diodes.

Avalanche Breakdo wn: There is a limit for the reverse voltag e. Reverse voltage can increase until the diode brea kdown voltage reaches. This point is called Avalanche Breakdown region. At this stage maximu m current will flow through the zener diode. This breakdown point is referred as “Zener voltage”.

The point at which current flows can be very accurately cont rolled (to less than 1% tolerance) in the doping st age of the diodes construction giving the diode a specific zener breakdown voltage, (Vz) ra nging from a few volts up to a few hundred volts. This zener breakdown voltage on the I-V curve is almost a vertical straight line.

The Zener Diode is used in its "reverse bias" or reverse breakdo wn mode, i.e. the diodes anode connects to the negativ e supply. From the I-V characteristics curv e above, we can see that the zener diode has a regio n in its reverse bias characteristics of almost a constant negative voltage regardless of the value of the current flowing through the di ode and remains nearly constant even with large cha nges in current as long as the zener diodes current remains between the breakdown current IZ(min) and the maximum current rating IZ(max). 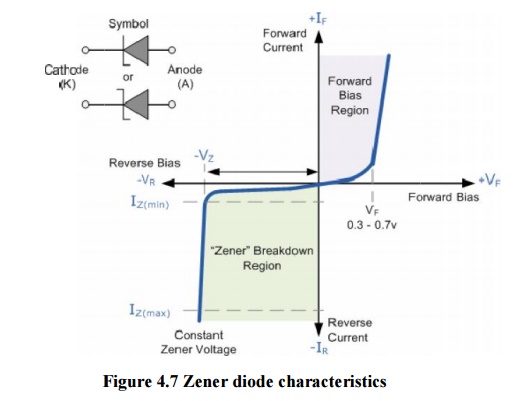 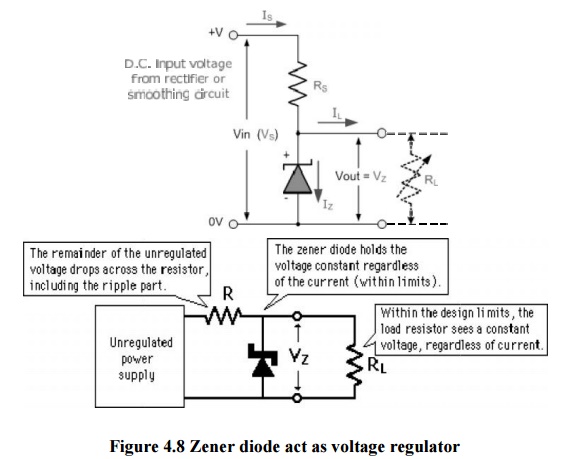 of the zener diode makes it a valua ble component for the regulation of the output voltagge against both variations in the input volta ge from an unregulated power supply or variations in t he load resistance. The current through the ze ner will change to keep the voltage at within the limit s of the threshold of zener action and the maximum power it can dissipate.

changes sign. The output circuit amounts to a zener regulator which switches from one zener voltage to the other on a transition. 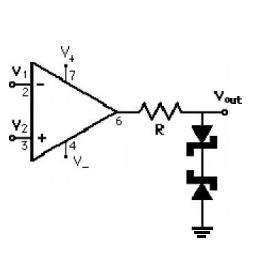 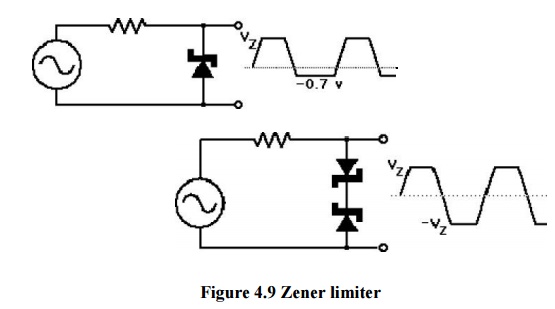 The zener diode is widely used as a voltage regulator because of its capacity to maintain a constant voltage over a sizeable range of currents. It can be used as a single component across the output of a rectifier or incorporated into one of the variety of one-chip regulators Basically there are two type of regulations such as:

Percentage of line regulation can be calculated by = 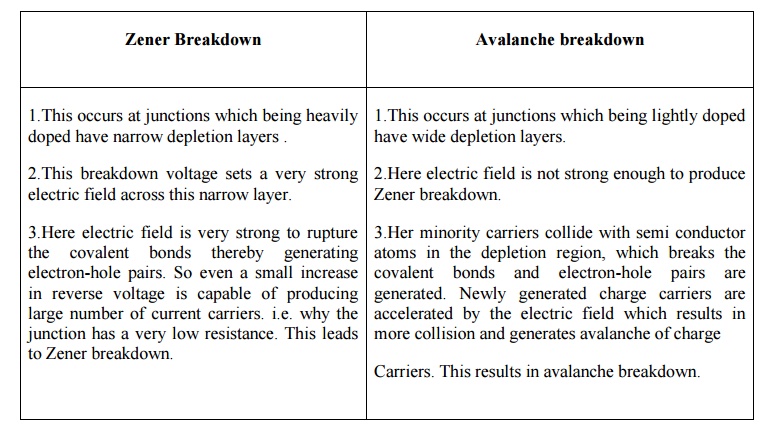 1.This occurs at junctions which being heavily doped have narrow depletion layers .

2.This breakdown voltage sets a very strong electric field across this narrow layer.

3.Here electric field is very strong to rupture the covalent bonds thereby generating electron-hole pairs. So even a small increase in reverse voltage is capable of producing large number of current carriers. i.e. why the junction has a very low resistance. This leads to Zener breakdown.

1.This occurs at junctions which being lightly doped have wide depletion layers.

3.Her minority carriers collide with semi conductor atoms in the depletion region, which breaks the covalent bonds and electron-hole pairs are generated. Newly generated charge carriers are accelerated by the electric field which results in more collision and generates avalanche of charge Carriers. This results in avalanche breakdown.