A Light Dependent Resistor (LDR) or a photo resistor is a device whose resistivity is a function of the incident electromagnetic radiation. Hence, they are light sensitive devices. They are also called as photo conductors, photo conductive cells or simply photocells.

A Light Dependent Resistor (LDR) or a photo resistor is a device whose resistivity is a function of the incident electromagnetic radiation. Hence, they are light sensitive devices. They are also called as photo conductors, photo conductive cells or simply photocells. They are made up of semiconductor materials havi ng high resistance. There are many different symbols used to indicate a LDR, one of the most comm only used symbol is shown in the figure bel ow. The arrow indicates light falling on it.

A photoresistor or light -dependent resistor (LDR) or photocell is a resistor whose resistance decreases with increasing incident light intensity; in other words, it exhibits photoconductivity. A photoresistor is made of a high resistance semiconductor. If light falling on the device is of high enough frequency, photons absorbed by the emiconductor give bound electrons enough energy to jump into the conduction band.

When light falls i.e. when the photons fall on the device, the electrons in the valence band of the semiconductor material are excited to the conduction band. These photons in the incident light should have energy greater than the band gap of the semiconductor material to make the electrons jump from the valence band to the conduction band.

Hence when light having enough energy is incident on the device more & more electrons are excited to the conduction band which results in large number of charge carriers. The result of this process is more and more current starts flowing and hence it is said that the resistance of the device has decreased. This is the most common working principle of LDR

If the device is allowed to absorb light, its resistance will decrease drastically. If a constant voltage is applied to it and intensity of light is increased the current starts increasing. Figure below shows resistance vs. illumination curve for a particular LDR. 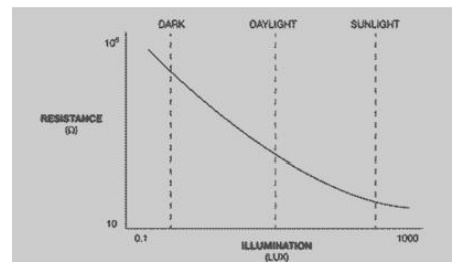 ·        LDR’s have low cost and simple structure. They are often used as light sensors.

·        They are used when there is a need to detect absences or presences of light like in a camera light meter.

LDR’s are cheap and are readily available in many sizes and shapes. Practical LDRs are available in a variety of sizes and package styles, the most popular size having a face diameter of roughly 10 mm. They need very small power and voltage for its operation.

Highly in-accurate with a response time of about tens or hundreds of milliseconds.