Laser action (with the resultant monochromatic and coherent light output) can be achieved in a p-n junction formed by two doped gallium arsenide layers. The two ends of the structure need to be optically flat and parallel with one end mirrored and one partially reflective.

Laser action (with the resultant monochromatic and coherent light output) can be achieved in a p-n junction formed by two doped gallium arsenide layers. The two ends of the structure need to be optically flat and parallel with one end mirrored and one partially reflective. The length of the junction must be precisely related to the wavelength of the light to be emitted. The junction is forward biased and the recombination process produces light as in the LED (incoherent). Above a certain current threshold the photons moving parallel to the junction can stimulate emission and initiate laser action.

Laser diodes and light emitting diodes have a number of elements in common with respect to their theory of operation. However the laser diode theory of operation incorporates more elements, taking in additional processes to provide the coherent light it produces. 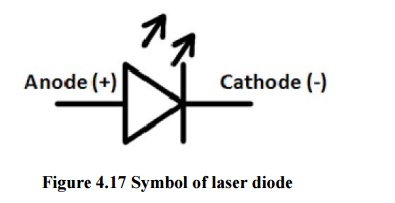 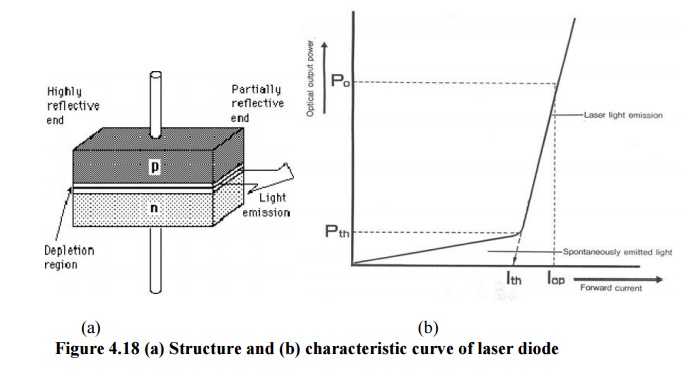 Figure 4.18 (a) Struct ure and (b) characteristic curve of laser di ode

A laser diode, or LD, is an electrically pumped semiconductor l aser in which the active medium is formed by a p-n j unction of a semiconductor diode similar to that found in a emitting diode. The laser diode is the most common type of laser produced. Laser diodes have a very wide range of uses that include, but are not limited to, fibre optic communic ations, barcode readers, laser pointers, CD/DVD/Blu-ray reading, laser printing, scanning and increasingly directional lighting sources.

There are three main processes in semiconductors that are associated with light:

·        Light absorption:  Absorption occurs when light enters a semiconductor and its energy is

transferred to the semiconductor to generate additional free electron s and holes. This effect is widely used and enables devices like to photo-detectors and solar cells to operate.

Spontaneous emission : The second effect known as spontaneous emission occurs in LEDs. The light produced in this manner is what is termed incoherent. In other words the frequency and phase are random, although the light is situated in a given part of the spectrum.

·        Stimulated emission: Stimulated emission is different. A light photon entering the semiconductor lattice w ill strike an electron and release energy in t he form of another light photon. The way in which this occurs releases this new photon of i dentical wavelength and phase. In this way the liight that is generated is said to be coherent.

The key to the laser diode operation occurs at the junction of the highly doped p and n type regions. In a normal p-n junction curre nt flows across the p-n junction. This action can occur because the holes from the p-type region and the electrons from the n-type region combine. With an electromagnetic wave (in this instance light) in passing through the las er diode junction diode junction it is found that the photo-emission process occurs. Here the photons release further photons of light occurs when they strike electrons during the recombination of holes and electrons occurs.

Naturally there is some absorpttion of the light, resulting in the generation o f holes and electrons but there is an overall gain in level.

The structure of the laser diode creates an optical cavity in which the light photons have multiple reflections. When the photons are generated only a small number are abl e to leave the cavity. In this way when one photon strikes an electron and enables another photon to be generated the process repeats itself and the photon density or light level starts to build u p. It is in the design of better optical cavities that much of the current work on lasers is being u ndertaken. Ensuring the light is properly reflected is the key to the operation of the device.