A tunnel diode or Esaki diode is a type of semiconductor that is capable of very fast operation, well into the microwave frequency region, made pos sible by the use of the quantum mechanical effect called tunneling.

·        A tunnel diode or Esaki diode is a type of semiconductor that is capable of very fast operation, well into the microwave frequency region, made pos sible by the use of the quantum mechanical effect called tunneling.

According to classical mechanics theory, a particle must have an en ergy at least equal to the the height of a potential-energ y barrier if it has to move from one side of the barrier to the other. In other words, energy has to be s upplied from some external source so that th e electrons on N side of junction climb over the junction barrier to reach the P-side. However if the barrier is thin such as in tunnel diode ,the Schrodinge r equation(Quantum Mechanics) indicates that there is a large probability that an electron wil l penetrate through the barrier. This will hap pen without any loss of energy on the part of electron . This quantum mechanical behavior is refer red to as tunneling and the high-impurity P-N junctio n devices are called tunnel-diodes. The tun neling phenomenon is a majority carrier effect.

Under normal forward bias operation, as voltage begins to increase, electrons at first tunnel through the very narrow p–n junction barrier because filled electron states in the conduction band on the n-side become aligned with empty valence band hole states on the p-side of the p-n junction. As voltage increases further t hese states become more misaligned and th e current drops – this is called negative resistance beca use current decreases with increasing voltag e. As voltage increases yet further, the diode begins to operate as a normal diode, where electro ns travel by conduction across the p–n junction, and no longer by tunneling through the p–n junction barrier. The most important operating region for a tunnel diode is the negative resistance region. 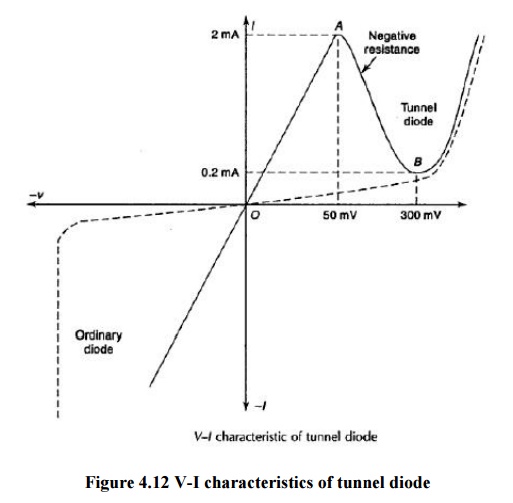 Energy-band diagram of pn junction in thermal equilibrium in which both the n and p region are degenerately doped.

Simplified energy-band diagram and I-V characteristics of the tunnel diode at zero bias.

-  Zero current on the I-V diagram;

-  All energy states are filled below EF on both sides of the junction;

This is the equivalent circuit of tunnel diode when biased in negative resistance region.

·        Hence equivalent circuit can be reduced to parallel combination of junction capacitance and negative resistance.

The tunnel diode is not as widely used these days as it was oat one time. With the improvement in performance of other forms of semiconductor technology, they have often become the preferred option. Nevertheless it is still worth looking at a tunnel diode, considering its advantages and disadvantages to discover whether it is a viable option.

·        Very high speed: The high speed of operation means that the tunnel diode can be used for microwave RF applications.

·        Longevity: Studies have been undertaken of the tunnel diode and its performance has been shown to remain stable over long periods of time, where other semiconductor devices may have degraded.

·        Reproducibility: It has not been possible to make the tunnel diode with as reproducible performance to the levels often needed.

The minority carriers slow down the operation of a device and as a result their speed is slower. Also the tunnelling effect is inherently very fast.

The tunnel diode is rarely used these days and this results from its disadvantages. Firstly they only have a low tunnelling current and this means that they are low power devices. While this may be acceptable for low noise amplifiers, it is a significant drawback when they are sued in oscillators as further amplification is needed and this can only be undertaken by devices that have a higher power capability, i.e. not tunnel diodes. The third disadvantage is that they are problems with the reproducibility of the devices resulting in low yields and therefore higher production costs.