MESFET stands for metal–semiconductor field effect transistor. It is quite similar to a JFET in construction and term inology. The difference is that instead of using a p-n junction for a gate, a Schottky (metal-semiconductor) junction is used.

MESFET stands for metal–semiconductor field effect transistor. It is quite similar to a JFET in construction and term inology. The difference is that instead of using a p-n junction for a gate, a Schottky (metal-semiconductor) junction is used. MESFETs are usually constructed in compound semiconductor technologies lacking high quality surface passivation such as GaAs, InP, or SiC, and are faster but m ore expensive than silicon-based JFETs or MOSFETs. Production MESFETs are operated up to approximately 45 GHz, and are commonly used for microwave frequency communications an d radar. From a digital circuit design perspe ctive, it is increasingly difficult to use MESFETs as th e basis for digital integrated circuits as the s cale of integration goes up, compared to CMOS silicon based fabrication.

The Metal-Semiconductor-Field-Effect-Transistor (MESFET) co nsists of a conducting channel positioned between a source and drain contact region as shown in the Figure 4.1. The carrier flow from source to drain is controlled by a Schottky metal gate. The control of the channel is obtained by varying the deplletion layer width underneath the metal conta ct which modulates the thickness of the conducting ch annel and thereby the current between source and drain. 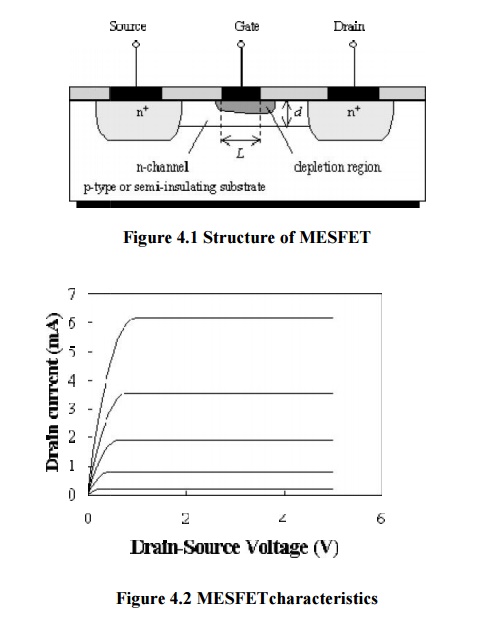 Numerous MESFET fabrication possibilities have been explored for a wide variety of semiconductor systems. Some of the main application areas are:

·        As power amplifier for output stage of microwave links.

Advantage of the MESFET

·        The higher transit frequency of the MESFET makes it particularly of interest for microwave circuits. While the advantage of the MESFET provides a superior microwave amplifier or circuit, the limitation by the diode turn-on is easily tolerated.

·        Typically depletion-mode devices are used since they provide a larger current and larger transconductance and the circuits contain only a few transistors, so that threshold control is not a limiting factor.

·        The buried channel also yields a better noise performance as trapping and release of carriers into and from surface states and defects is eliminated.

·        The use of GaAs rather than silicon MESFETs provides two more significant advantages: first, the electron mobility at room temperature is more than 5 times larger, while the peak electron velocity is about twice that of silicon.

·        Second, it is possible to fabricate semi-insulating (SI) GaAs substrates, which eliminates the problem of absorbing microwave power in the substrate due to free carrier absorption.

Disadvantage of the MESFET

·        The threshold voltage therefore must be lower than this turn-on voltage. As a result it is more difficult to fabricate circuits containing a large number of enhancement-mode