A grammar consists of a number of productions. Each production has an abstract symbol called a nonterminal as its left-hand side, and a sequence of one or more nonterminal and terminal symbols as its right-hand side.

Starting from a sentence consisting of a single distinguished nonterminal, called the goal symbol, a given context-free grammar specifies a language, namely, the set of possible sequences of terminal symbols that can result from repeatedly replacing any nonterminal in the sequence with a right-hand side of a production for which the nonterminal is the left-hand side.

It is used to describe the tokens of programming languages.

The transition diagram has set of states and edges.

It has no start symbol.

It is useful for describing the structure of lexical constructs such asidentifiers, constants,        keywords, and so forth.

It is used to check whether the given input is valid or not using derivation.

The context-free grammar has set of productions.

It has start symbol.

parentheses, matching begin- end’s and so on. 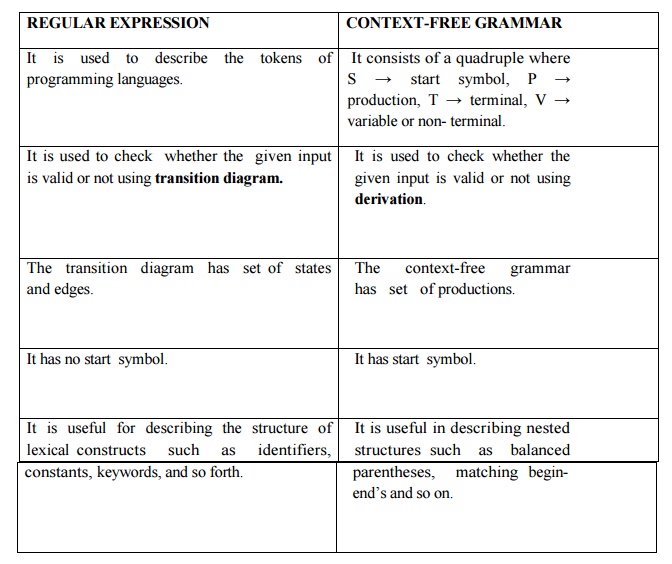 There are four categories in writing a grammar :

Each parsing method can handle grammars only of a certain form hence, the initial grammar may have to be rewritten to make it parsable.

The lexical rules of a language are simple and RE is used to describe them.Regular expressions provide a more concise and easier to understand notation fortokens than grammars.

Ø Efficient lexical analyzers can be constructed automatically from RE than from grammars.

Ø Separating the syntactic structure of a language into lexical and nonlexical parts provides a convenient way of modularizing the front end into two manageable-sized components.

Ambiguity of the grammar that produces more than one parse tree for leftmost or rightmost derivation can be eliminated by re-writing the grammar.

Consider this example, G: stmt→ifexprthenstmt|ifexprthenstmtelstmte|other This grammar is ambiguous since the string if E1 then if E2 then S1 else S2 has the following two parse trees for leftmost derivation (Fig. 2.3)

To eliminate ambiguity, the following grammar may be used: stmt→matched|unmatchedstmt_stmt

A grammar is said to be left recursiveifithasanon-terminal Asuch that there is a derivation A=>Aα for some string α. Top-down parsing methods cannot

without changing the set of strings derivable from A.

Algorithm to eliminate left recursion: Arrange the non-terminals in some order A1, A2 . . . An.

production of the form Ai → Aj γ by the

eliminate the immediate left recursion among the Ai-productions 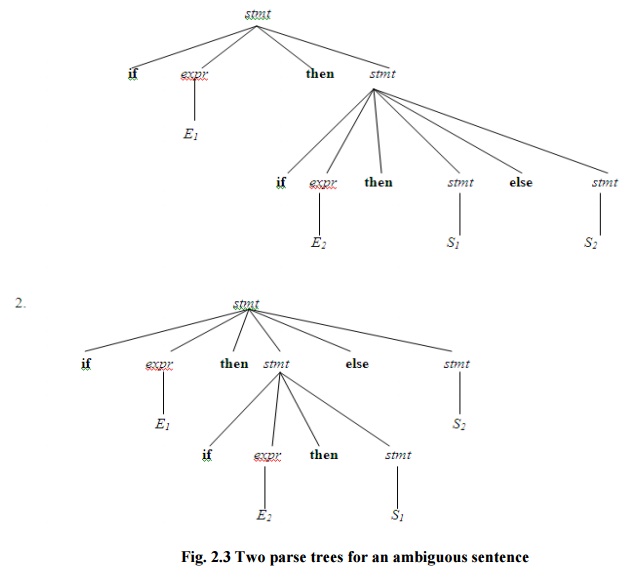 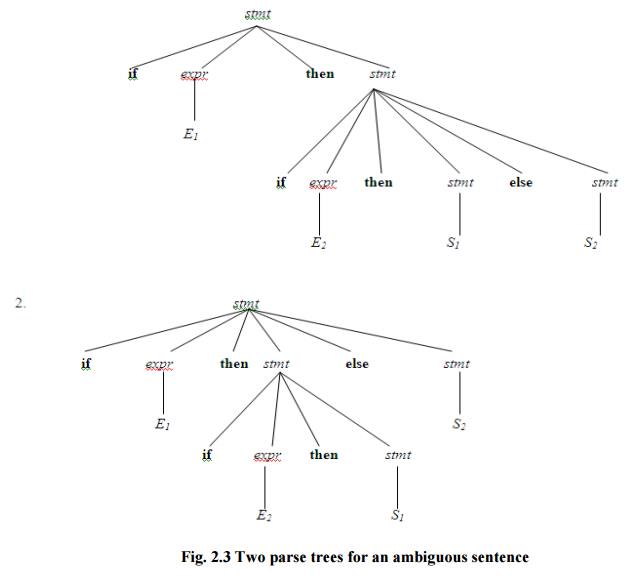 Left factoring is a grammar transformation that is useful for producing a grammar suitable for predictive parsing. When it is not clear which of two alternative productions to use to expand a non-terminal A, we can rewrite the A-productions to defer the decision until we have seen enough of the input to make the right choice.

If there is any→αβ1|production2αβ,itcan beA rewritten as