3.     Types of handoff and their characteristics

In this unit we discuss what is cellular systems and how the frequency and channels are allocated. Medium access control tells how to reduce traffic in the network and we discuss about frequency , time, space and code division multiple access.

Cellular telephone systems must accommodate a large number of users over a large geographic area with limited frequency spectrum, i.e., with limited number of channels. If a single transmitter/ receiver is used with only a single base station, then sufficient amount of power may not be present at a huge distance from the BS. For a large geographic coverage area, a high powered transmitter therefore has to be used. But a high power radio transmitter causes harm to environment. Mobile communication thus calls for replacing the high power transmitters by low power transmitters by dividing the coverage area into small segments, called cells. Each cell uses a certain number of the available channels and a group of adjacent cells together use all the available channels. Such a group is called a cluster. This cluster can repeat itself and hence the same set of channels can be used again and again.

In order to know how mobile is made this is necessary.

With the rapid increase in number of mobile users, the mobile service providers had to follow strategies which ensure the effective utilization of the limited radio spectrum. With increased capacity and low interference being the prime objectives, a frequency reuse scheme was helpful in achieving this objectives. A variety of channel assignment strategies have been followed to aid these objectives. Channel assignment strategies are classified into two types: fixed and dynamic.

In fixed channel assignment strategy each cell is allocated a fixed number of voice channels. Any communication within the cell can only be made with the designated unused channels of that particular cell. Suppose if all the channels are occupied, then the call is blocked and subscriber has to wait. This is simplest of the channel assignment strategies as it requires very simple circuitry but provides worst channel utilization. Later there was another approach in which the channels were borrowed from adjacent cell if all of its own designated channels were occupied. This was named as borrowing strategy. In such cases the MSC supervises the borrowing process and ensures that none of the calls in progress are interrupted.

In dynamic channel assignment strategy channels are temporarily assigned for use in cells for the duration of the call. Each time a call attempt is made from a cell the corresponding BS requests a channel from MSC. The MSC then allocates a channel to the requesting the BS. After the call is over the channel is returned and kept in a central pool. To avoid co-channel interference any channel that in use in one cell can only be reassigned simultaneously to another cell in the system if the distance between the two cells is larger than minimum reuse distance. When compared to the FCA, DCA has reduced the likelihood of blocking and even increased the trunking capacity of the network as all of the channels are available to all cells, i.e., good quality of service. But this type of assignment strategy results in heavy load on switching center at heavy traffic condition.

This is used to know how the frequency is assigned to cells and how the channels are clustered in heavy and less traffic conditions.

When a user moves from one cell to the other, to keep the communication between the user pair, the user channel has to be shifted from one BS to the other without interrupting the call, i.e., when a MS moves into another cell, while the conversation is still in progress, the MSC automatically transfers the call to a new FDD channel without disturbing the conversation. This process is called as handoff. Processing of handoff_ is an important task in any cellular system. Handoffs must be performed successfully and be imperceptible to the users. Once a signal level is set as the minimum acceptable for good voice quality (Prmin), then a slightly stronger level is chosen as the threshold (PrH)at which handoff has to be made, as shown. A parameter, called power margin, defined as quite an important parameter during the handoff process since this margin can neither be too large nor too small. If is too small, then there may not be enough time to complete the handoff and the call might be lost even if the user crosses the cell boundary. If it is too high o the other hand, then MSC has to be burdened with unnecessary handoffs. This is because MS may not intend to enter the other cell. Therefore it should be judiciously chosen to ensure imperceptible handoffs and to meet other objectives. 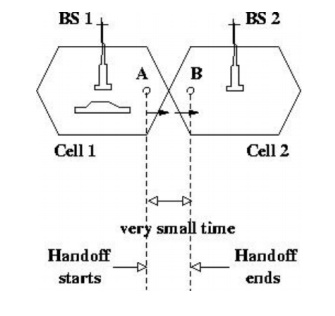 Handoff is used to know how the call is continued without any interrupt when the mobile node moves from one base station to other.

MAC is a data communication protocol. It is a sub layer of the data link layer, which itself is layer 2. The MAC sub layer provides addressing and channel access control mechanisms that make it possible for several terminals or network nodes to communicate within a multiple access network that incorporates a shared medium, e.g. Ethernet. It is also referred to as a medium access controller.

The Carrier Sense Multiple Access (CSMA) with Collision Detection (CD) protocol is used to control access to the shared Ethernet medium. A switched network (e.g. Fast Ethernet) may use a full duplex mode giving access to the full link speed when used between directly connected two NICs, Switch to NIC cables, or Switch to Switch cables.

It is used for mobile nodes to communicate without any infrastructure. Overcomes the Near and Far terminal and Hidden-Exposed terminal problems

It shows the dimensions of code c, time t and frequency t. Space division multiplexing (SDM) the (three dimensional) space si is also shown. The channels k1 to k3 can be mapped onto the three spaces s1 to s3 which clearly separate the channels and prevent the interference ranges from overlapping. The space between the interference ranges is sometimes called guard space. Such a guard space is needed in all 4 multiplexing schemes presented. The remaining channels(k4 to k6) three additional spaces would be needed. In wireless transmission SDM implies a separate sender for each communication channel with a wide enough distance between senders. 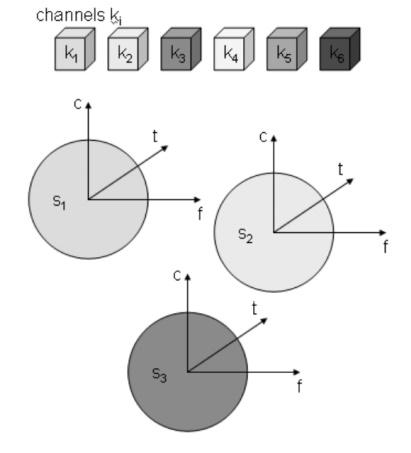 Waste of bandwidth if the traffic is distributed unevenly

Here channels k1 is given the whole bandwidth for a certain amount of time i.e all senders use the same frequency but at different point of time Guard spaces which represent time gaps have to separate the different periods when the senders use the medium. If two transmissions overlap in time this is called co-interference. To avoid this type of interference precise synchronization between different senders is necessary.

Only one carrier in the medium at any time

Throughput high even for many users

Each channel has a unique code

All channels use the same spectrum at the same time

No coordination and synchronization necessary

Good protection against interference and tapping

The DSSS receiver is more complex than the transmitter. The receiver only has to perform the inverse functions of the two transmitter modulation steps. However, noise and multi-path propagation require additional mechanisms to reconstruct the original data. The first step in the receiver involves demodulating the received signal. This is achieved using the same carrier as the transmitter reversing the modulation and results in a signal with approximately the same bandwidth as the original spread spectrum signal. Additional filtering can be applied to generate this signal. While demodulation is well known from ordinary radio receivers, the next steps constitute a real challenge for DSSS receivers, contributing to the complexity of the system. The receiver has to know the original chipping sequence, i.e., the receiver basically generates the same pseudo random sequence as the transmitter. Sequences at the sender and receiver have to be precisely synchronized because the receiver calculates the product of a chip with the incoming signal. This comprises another XOR operation as explained in section 3.5, together with a medium access mechanism that relies on this scheme. During a bit period, which also has to be derived via synchronization, an integrator adds all these products. Calculating the products of chips and signal, and adding the products in an integrator is also called correlation, the device a correlator. Finally, in each bit period a decision unit samples the sums generated by the integrator and decides if this sum represents a binary 1 or a 0. If transmitter and receiver are perfectly synchronized and the signal is not too distorted by noise or multi-path propagation,. On the receiver side, this signal  is XORed bit-wise after demodulation with the same Barker code as chipping sequence. This results in the sum of products equal to 0 for the first bit and to 11 for the second bit. The decision unit can now map the first sum (=0) to a binary 0, the second sum (=11) to a binary 1 this constitutes the original user data. In real life, however, the situation is somewhat more complex. Assume that the demodulated signal shows some distortion, e.g., 1010010100001101000111.

Additionally, the different paths may have different path losses. In this case, using so-called rake receivers provides a possible solution. A rake receiver uses n correlators for the n strongest paths. Each correlator is synchronized to the transmitter plus the delay on that specific path. As soon as the receiver detects a new path which is stronger than the currently weakest path, it assigns this new path to the correlator with the weakest path. The output of the correlators are then combined and fed into the decision unit. Rake receivers can even take advantage of the multi-path propagation by combining the different paths in a constructive way